Differences between revisions 21 and 53 (spanning 32 versions)

A single “Appearance” panel should provide a setting for choosing a Yaru variant (Light, Standard, or Dark), and settings for the Launcher. 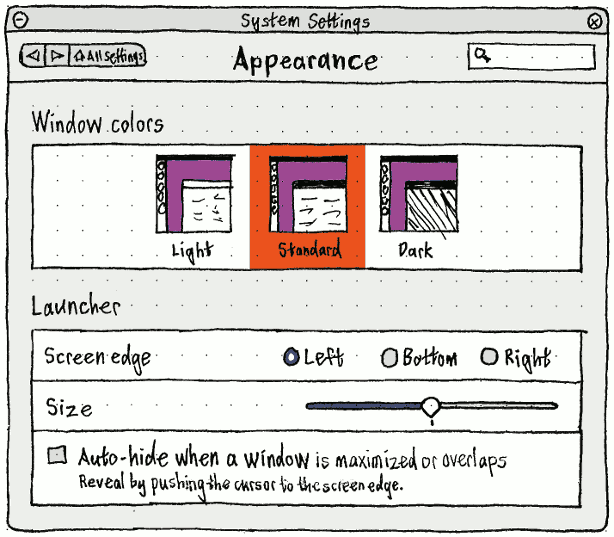 If you have any other themes installed (excluding the High Contrast theme), they should appear following the Yaru variations in the list, in alphabetical order, each with a generic theme icon (since theme packages do not provide any preview image). If any theme has an installed dark variant, it should appear as a separate item in the list (since that’s how the Yaru variants are presented).

Choosing any of the theme options should set the toolkit and cursor theme simultaneously. In the case where different themes have been set for toolkit and cursors (for example, using gnome-tweak-tool), a temporary option “Custom” should be present and selected as the last item in the list.

Whenever the “Appearance” panel opens, the list of themes should be scrolled, if necessary, to show the current selection.

Whenever a theme change is detected, if

then a “Change Theme” prompt should appear. (It doesn’t matter if the prompt takes ten or twenty seconds to appear.) 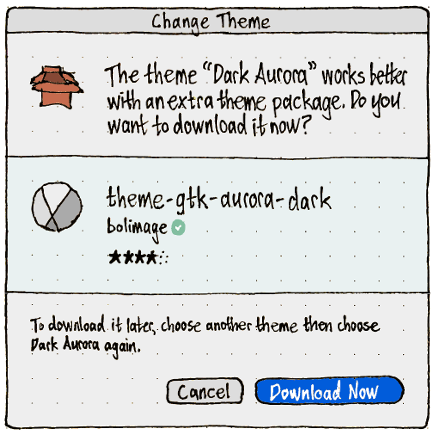 The snap icon, title, publisher, and rating should be presented the same way as on the Snap Store.

If you choose “Download Now”, the dialog should morph so that the question is replaced by a progress indicator, while the caption and commit buttons are removed. 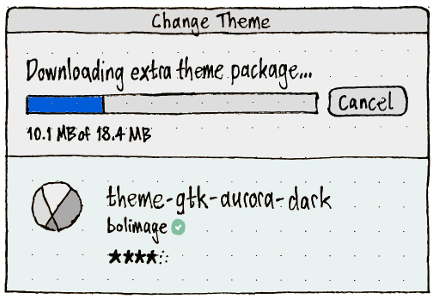 If any error occurs during the download or installation progress, the dialog should morph to become an error alert. 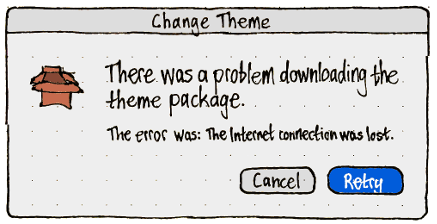 If installation succeeds, and no applicable snaps are currently running, the primary text should change to “Installation complete” for two seconds, then the dialog should close automatically.

If any applicable snaps are currently running, the dialog should morph to display each of them with its own Relaunch button, plus “Skip” and “Relaunch All” buttons. 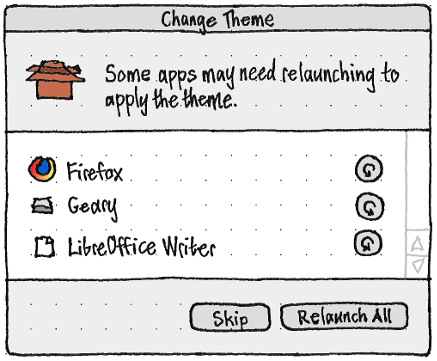 Clicking any of the relaunch buttons should send a signal to the relevant app(s) to close, and once they do, should launch them again.

If any listed app closes, whether because it was relaunched here or for any other reason, it should disappear from the list. If the list becomes empty, the dialog should close automatically.

When choosing a background, by far the best representation is seeing the full-size background on the screen itself. This avoids frustration from choosing an image that has too low resolution, or from cropping an image poorly, and not being able to see the problem until you have exited. It’s also more fun.

You can’t pinch or drag the real background to resize or crop it, so the windowed mode needs its own controls for that. Therefore, the Background UI must be different in staged mode than in windowed mode.

“New”, “Recent”, “Pinch to crop”, and “Drag to move” should all be white text with a black outline, so that you can read them against any background.

Tapping “New” should open a picker for selecting a new image, including an “Ubuntu Backgrounds” collection (bug 1288364) that does not appear when the picker is called from other apps. (Alternatively, this collection should be placed by default in the Gallery app.)

After a fresh install, the “Recent” list should should be pre-populated with the default images from the most recent Ubuntu contest. Otherwise, it should consist of the ten most recently chosen distinct background settings — that is, an image rendered in a particular way. This means there may be multiple recent background settings that use the same picture but with different renderings. A background setting should be saved whenever you leave the “Background” screen.

If you choose a new image, that image should zoom up from the “New” button to be shown as the current background, following its appropriate default rendering. If you choose any of the “Recent” items, that image should similarly zoom up from its thumbnail to become the current background. At the same time, any “Recent” items to its left should slide along one spot, making way for the previous selection to zoom down to become the most “Recent” item. If you chose a new image, the least recent setting should disappear from the list.

Long-pressing a “Recent” item should reveal a popover menu with a single item, “Delete”. (Deleting recent background settings will be a rarely-needed function, usually wanted only after relationship breakups.) 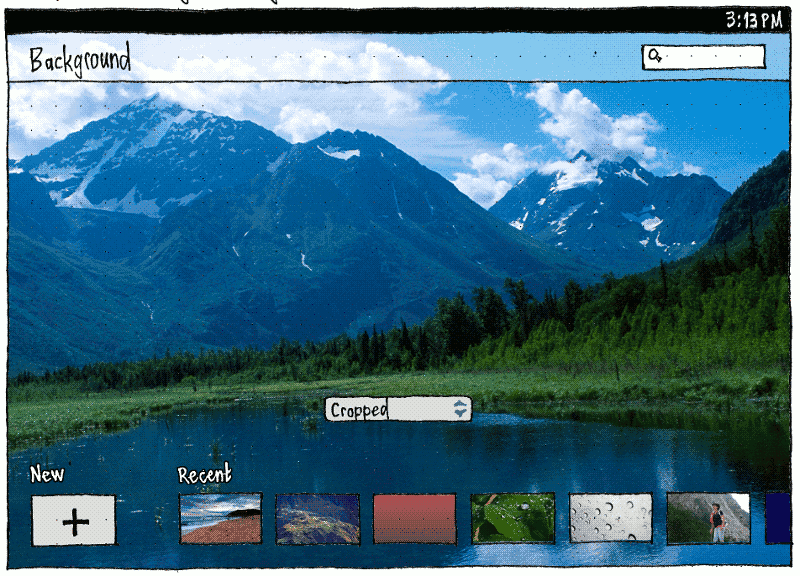 Whenever “Different background on each display” is chosen, on each other display a full-screen dialog should appear for configuring the background for that display.

The windowed mode layout is different, so that it can contain a correctly-proportioned thumbnail for dragging. 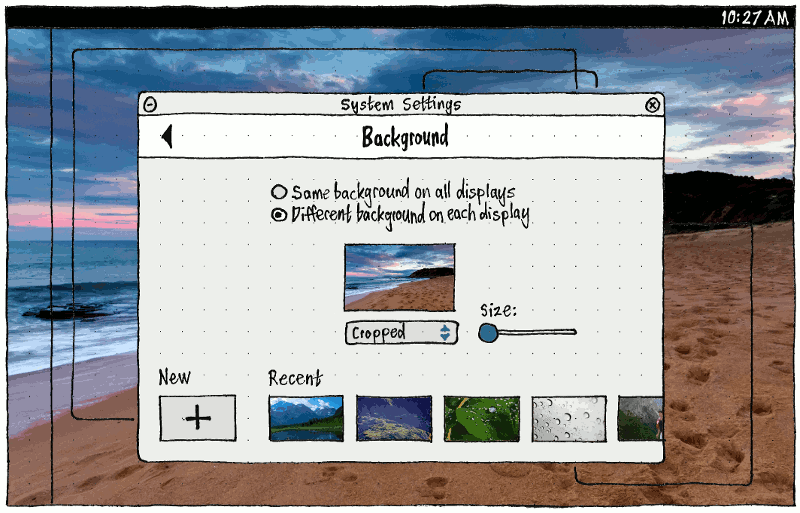 Similar to the staged mode layout, whenever “Different background on each display” is chosen, on each other display a parentless dialog should appear for configuring the background for that display. 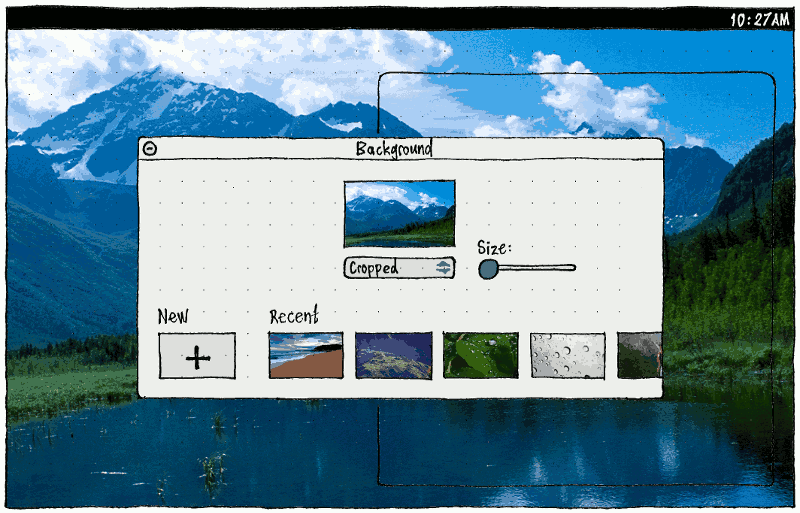 Whenever you select a new image, its default rendering on each display should be whichever is most likely to suit that image on that display, but you should be able to change the rendering using a radio menu.

Whenever the rendering for the current image is set to “Cropped”, and you have a touchscreen or multi-touch touchpad, the standard gestures should resize and pan the picture to choose the cropped area (bug 1368286). In case you do not realize this:

In addition, the introductory label should be “Launcher appearance on large displays:” if the current display does not fall into this category (to explain why the settings aren’t applying to the display that you’re looking at), and just “Launcher appearance:” otherwise.