Differences between revisions 39 and 40

This is the home of Ubuntu’s Bluetooth team. Join up to help us make Bluetooth ROCK in Ubuntu, working together with upstream to test it and make it work out of the box. There’s also a mailing list of Bluetooth-related bugs. For help using Bluetooth in Ubuntu, see Ubuntu Help.

How you can help out:

In the Bluetooth indicator across form factors, and in the System Settings quick access area, the current Bluetooth status should be represented by an icon:

(The exception to this is when Bluetooth is off on the phone, where the indicator hides completely to save space.)

None of these icons should be colored, because they are likely to persist in the menu/status bar for a long time, and none of the states need altering.

At the bottom of the “Bluetooth” panel in System Settings should be a checkbox, “Show Bluetooth status in the menu bar”. It should be checked by default for a new user account, but should be sensitive only when there is a powered Bluetooth card or dongle. 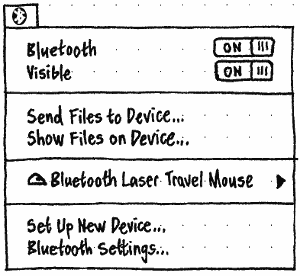 Whenever that checkbox is sensitive and checked, a Bluetooth menu should appear in the menu bar.

Should we also/instead distinguish whether a Bluetooth device is currently being used? For example, waiting for a headset to pair before making a call.

If any devices have been paired and not forgotten, these should be listed following another separator, with an icon for each.

Initially, the phone will allow use of Bluetooth headsets only. It will be extended to allow other device types later.

Whenever any device is paired, or if any device was paired the last time Bluetooth was turned off, the quick access area should contain a “Bluetooth” switch. The switch itself should temporarily be replaced by a spinner whenever Bluetooth is turning on or off. 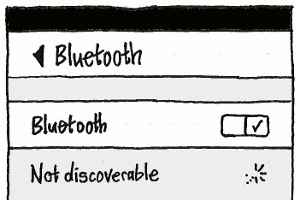 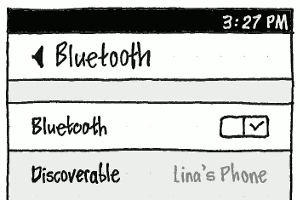 The way of making the phone discoverable should be by navigating to the System Settings “Bluetooth” screen, with Bluetooth on, for more than one second. To indicate this: 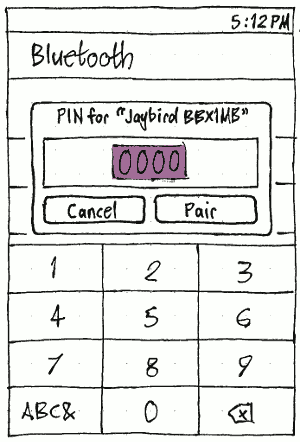 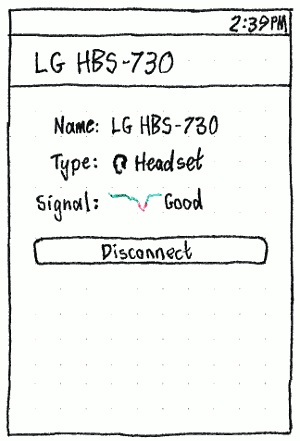 Erratum: “Detected devices:” should be “Connect another device:”.

In all these lists, each device should have an icon representing the type of device it is (or a Bluetooth icon if it is an unknown type), and its display name, ellipsized in the middle if too long to fit. This is both because the names of similar devices may differ only at their ends, and because an ellipsis at the end means something else. Specifically, in the “Connect a device:”/“Connect another device:” list, the name should end in an ellipsis if the device is of a type that always requires entering a PIN (that is, not a headset, keyboard, or mouse).

The “Connect a device:”/“Connect another device:” list should contain placeholder text “None detected” when appropriate, for example when entering the screen. The list should update every ten seconds, with a spinner showing opposite the label whenever scanning is in progress (bug 1272317).

Tapping a device in the “Connect a device:”/“Connect another device:” list should begin pairing. While pairing is in progress, the list item for the device should have a spinner at its trailing end.

If the device is of a type that usually has the PIN “0000” (a headset, keyboard, or mouse), Ubuntu should try this first. If that doesn’t work, or for any other kind of device, a ‘PIN for “{headset name}”’ or ‘Passkey for “{headset name}”’ dialog should appear, with a PIN/passkey field that uses a number-based keyboard.

If pairing is successful, the “Bluetooth” screen should scroll to the top, so that you can see the device’s list item slide up to join the “Connected devices:” list. If the newly-connected device is a headset, and a headset was already paired, that previously-paired headset should automatically be disconnected, sliding down to rejoin the “Connect another device:” list, so that you never have more than one headset paired at a time.

Choosing a device in the “Connected devices:” section should navigate to a screen with the device name as its header. It should contain a key-value table showing the “Name:” (full and wrapped to multiple lines if necessary), “Type:” (with icon), and “Signal:” strength of the device (with a one-minute sparkline graph and “Excellent”/“Good”/“Fair”/“Poor” text). If you choose “Disconnect”, that button should become insensitive, the “Signal:” value should be replaced by a spinner and the word “Disconnecting…”, and one second later you should be returned to the main “Bluetooth” screen to see the device sliding down from the “Connected devices:” list to the “Connect a device:”/“Connect another device:” list.

For reassurance about whether a device is still paired, the Bluetooth switch should be followed by an insensitive item, with icon, for each currently-paired device.

“Bluetooth Settings…” should open the Bluetooth screen of System Settings.

The battery charge for a paired Bluetooth device should be represented in the battery UI, both on the PC and on the phone.

In future, Ubuntu Touch should allow connecting other types of Bluetooth device.