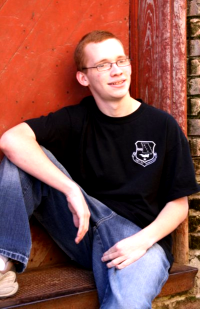 Hello, I'm Daniel. I am a CCNA student at my local high school. I have been helping other in my local community and introducing other to Ubuntu for the past 5 months. I also am interested in Accessability, where I've been trying out different tools that might help out those in need. I know HTML almost fluently althought without stong knowledge of PHP most of my websites are web 1.0 (functional, not pretty.)

I get this question a lot, Why is my name CensoredBiscuit? In all honesty I have no cool story or anything, what happened was two or three years ago I had an xbox live gamertag of censoredbiscuit and one of the cool things about this name is the fact that its never taken anywhere. So the name went dormant for me, for around two years until I took CNS classes and I used that Username. When I joined Ubuntu it felt just like the name that I should use. If you have trouble spelling it you could always just call me Daniel (or use the friggin tab key on IRC)

One big reason of my interest in Accessibility is because since I was two I was diagnosed with Mild Cerebral Palsy which affects my left side (armib and leg.) I am going on surgery #10 this upcoming month. I've had surgeries since I was 2 months old and my official diagnoses was at 2 years old. Things get rough but I think I cope well. Especially considering I started using a computer about when I learned to walk.

What User wiki page would be complete without a little bit about my machines. I have had many laptops and desktops in the past so to keep them all seperate (both for me and the network) I can no longer name machines Daniel-laptop or Daniel-PC. So I go creative and started naming my machines a girls name that starts with an 'E'. The two nodes that I have right now are named 'Emma' and 'Elizabeth'

Emma is the oldest node of the two. Emma is a Desktop HP Pavillion that came complete with a monitor and ps/2 keyboard/mouse(that still work to this day). I purchase her in February 2008. Worked with Ubuntu straight from the box without much trouble. Since the purchasing of Elizabeth, Emma handles mainly home server jobs that a laptop would overheat doing (lengthy downloads, samba shares and whatever else have you). Although the role of Emma recently has changed quite a bit. When I first bought Elizabeth, Emma was upgraded to 11.04, but it recently bored me so I decided to make it into a full blown server with headless operation. She still handles around the same things as she used to but she is now a teaching tool so I can learn the ins and outs of Ubuntu Server 10.10, SSH and other assorted items

Elizabeth is my newest node which I bought just the 29th of December. Elizabeth is a Sony Vaio laptop which I actively do my work on. Elizabeth was a little harder to get Ubuntu running on then Emma, I had to update grub more specifically I had change one line to read GRUB_CMDLINE_LINUX="i8042.reset i8042.nomux i8042.nopnp i8042.noloop" (and update grub)
The speculated reason for this update to grub is because the Sony Vaio bios/configuration recoginize the touchpad as a ps/2. After that she worked with no problem. As this is the machine I'm actively using, Elizabeth does have an active apache server that I plan on hosting a flash games launcher on (That I designed in high school) So that My friends can play flash games while connected to the same network my laptops on. Elizabeth has a manual redundancy of all the information stored on EMMA. So that if one computer crashes I won't lose my information.

If you need to contact me, you can use the email above (Daniel {at} lmail {dt} us) or memoserv me on IRC. You can always PM me or otherwise. I'm pretty much open to any means of communication that won't put me in harms way.