For the Lucid cycle, the DX team is focusing on a part of the desktop that has become a problem-area:

The current notification area is more and more difficult for users to interact with. Each application behaves differently, they're not accessible, and they're even sometime styled differently.

We propose to migrate the different applets to using simple menus. This change should provide a more consistent interface and be an important step to improve the user experience with the right hand side of the panel.

To implement that change, we're proposing to use a set of dbus protocols. These protocols are based on current technologies, some already used in Ubuntu, others also discussed by members of the FreeDesktop.org group. This includes an implementation already validated by the KDE project.

We are providing a set of libraries compatible with the 2 major desktop environments, along with tools and documentation to help porting applications to use the new protocols.

This effort is managed as part of the Ayatana project group on Launchpad, joining other cross-desktop projects that were delivered during the last Ubuntu development cycles. See resources below.

The panel indicator area was introduced in an early version of Gnome, on the model of the Microsoft '95 design, as an area dedicated to notifications. It is often called the systray or the notification area.

Generally it allows users to very quickly access important application features. For application developers, there are thus certain occasions were it's interesting to host some of the user interface directly on the panel:

Issues with the current situation

Over time the notification area grew organically and somewhat inconsistently, for example, by including various applets which, according to the Guidelines, do not properly belong in the panel indicators area. 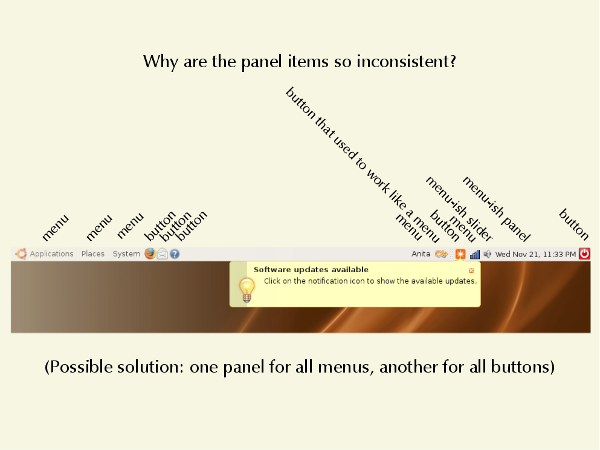 1. The areas of the panel are not clearly defined or identifiable at a glance because items are no longer organised visually, behaviorally and logically. Each item seems to have an independent purpose and, when clicked, behaves very differently one from the other. We have buttons, menu-ish panel, menu-ish slider and menus. This makes it almost impossible for users to gain a clear overall picture of the function of that area.

2. Users expect items close to each other to behave similarly. They rely on the proximity of applets/applications/menus to predict their behaviours and explain their functions (Usability principles: 1) proximity compatibility (Barnett & Wickens, 1988; Wickens & Carswell, 1995) and 2) consistency (Universal Principle of Design; Nielsen Norman; Bastien & Scapin). The unpredictability of behaviours of items in the panel indicator generates some confusion since users are not always in a position to interpret what the system is doing in response to their actions.

Recommendations: Decisions have to be made about the role of the panel indicators area and items have to be grouped and organized with consistency as to goal, function and behavior in order to offer users a consistent, predictable and therefore intuitive experience.

The major issue is the inconsistency and disorganized state of the right side of the panel. So we propose to define 2 main areas on the panel:

Additionaly, we propose to turn all of the elements on the right side of the panel into regular menus.

This way, users will not have to worry about whether a function is accessible with a left or right click, or be suprised when a click on a panel icon suddenly hides or shows a full application window. Additionally, that will help provide:

Note: for compatibility reasons, we'll maintain a notification area zone for a while, to let application developers gradually migrate to the new protocol. Eventually, the old notification area should disappear and applications being able to inject generic/common functions in the system area, while the application-specific features will stay in the "application indicator" zone.

During the Jaunty and Karmic cycles, we initiated a process to connect the panel and parts of the system using dbus. Traditionally the panel communicates with the rest of the system through a variety of technologies like: Orbit, X properties or Xembed. That flexibility has allowed a lot of applications to use the panel, but the general result is that this starts to show its age.

Using dbus for the panel. We've started with some menus (that we call indicators). We want to continue with all systray/notification-area applications. We call these application-indicators.

There are different parts composing the architecture required to implement the proposed solution.

We want to do this in a cross-desktop friendly manner that uses existing standards and is easy to migrate to. Therefore we propose this new method of application panel indicators.

In the implementation we developed for the Gnome desktop, we're reusing some existing technologies and introducing a new library.

Note: the extensions to KDE's KStatusNotifier API have been discussed with upstream developers in order to have cross-desktop compatible protocols. This way a KDE application running on a Gnome desktop will have its icon and context menu properly rendered in the Gnome panel. Similarly, a Gnome application running under KDE, should see its icon and menu rendered in the new systray plasmoïd.

Get the code here:

We have set up a PPA with the core libraries needed for you to install and test libappindicator for Ubuntu Karmic. For Lucid users the libraries will be included in the distro by default.

(this will be a seperate page on the wiki)

The application indicators API is similar to the GtkStatusIcon API in some ways, but simpler and more opinionated in its design.

Indicators are grouped together by category, so it's important for the application to accurately specify its category. Possible categories for indicators include:

The category is set when the indicator is created and isn't changed.

Application indicators fall into one of three states:

The indicator status can be set using app_indicator_set_status().

Indicators should typically be created using the helper function app_indicator_new(). This returns a pointer to a newly created AppIndicator object, which is may be unref'd normally when it is no longer needed. This function expects three parameters:

The id parameter should be unique to your application. Because app indicators are cross-desktop, the icon_name parameter expects an icon name according to the usual icon naming spec. The category parameter is the indicator category as described above.

Once an indicator object is created, the application may decide to set an attention icon using app_indicator_set_attention_icon().

Lastly, the indicator should be given a GtkMenu object. This can be either created manually or using some other method such as GtkUIManager. Below is an example using GtkUIManager.