Differences between revisions 42 and 43

A short history of Ubuntu NL

Ubuntu NL was founded in 2004 and is one of the LoCos that became de-facto approved. In the past six years, the Dutch LoCo has evolved from a small group on IRC into a very active community.

Ubuntu NL is closely cooperating with Ubuntu BE and many Flemish Ubuntu BE members can be found in the communication channels of Ubuntu NL. For the whole Dutch-speaking Ubuntu community there is one IRC channel, one forum and one translation team.

Under inspiring leadership of Sense Hofstede Ubuntu-NL has recently set up well documented new governance structures and processes. As a result a new Community Governance body, a Community Board and Chair were chosen. The new governance bodies are operating with confidence, and previously existing problems with governance seem to be resolved.

Only six weeks before Ubuntu-NL's hosting contract would end some team members attending the HCC Linux event were notified of this by the former sysadmin, so it was kind of an emergency situation for Ubuntu-NL. The main community infrastructure was at risk of failing if no action was taken. The community board took on the task of finding a new hosting provider and to manage the process. The second oldest hosting provider in the Netherlands, community driven, the HCC came to the rescue and offered to host the Ubuntu-NL services. A new sysadmin team was formed to take on the task of moving the services to the new hosting. 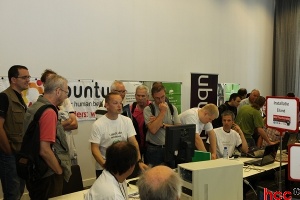 A special website for the elections was developed where candidates could register, and Ubuntu-NL members could vote: 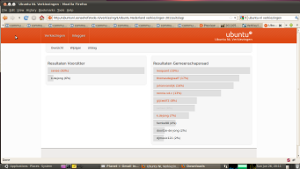 There was a good number of candidates, and the first chosen Ubuntu-NL Community Board is a fact. The new board is functioning with confidence and takes on responsibility for issues that surpasses the Ubuntu-NL teams level. The former governance problems seem to be a thing of the past. 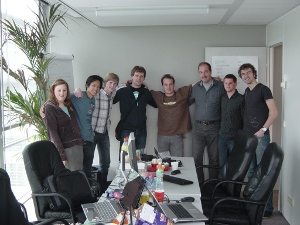 This was a very useful meeting, some community members met for the first time irl, work was done on the new forum theme, translation skills were teached, and we all had a very good time.

The proposal that addresses problems in Ubuntu-NL governance was accepted. Sense Hofstede, Ubuntu-NL's LoCo representative worked with the reflection from the team and wider community on this proposal that aims to clearly define the structure of Ubuntu Nederland and should help solving previous problems with governance.

The Ubuntu-NL translation team worked hard on the Dutch translation of the Ubuntu Manual. It's ready for download now. Hurray!

The aim of the Ubuntu-NL Mwanzo initiative is to help new community members to become active participants in the community.

Our focus is to set up an official foundation to support the Ubuntu NL community. The main reason for this is to provide our volunteers with correct insurance coverage and protect them against possible trouble that may arise when things go wrong during events organized, and to be able to open a bank account for financial transactions.

We want to organize several smaller release parties for the upcoming winter release.

The Ubuntu NL Forum can be found at forum.ubuntu-nl.org. The forum is for all Dutch-speaking Ubuntu users, including the Flemish. The forum has over 60,000 topics and over 700,000 messages.

Last year the Ubuntu NL Forum has seen changes to its structure: the subforums 'Translations', 'Documentation', 'Promotion' and 'Artwork' were fully opened to the community. This was done to allow anyone who wants to contribute to cooperate, without having to become a member of the Ubuntu NL Team. A new forum was the 'For Sale & Want To Buy' subforum.

We had a 'Board Community Council & Forum Delegation' in which delegates from the regular members could discuss matters together with the Community Council. The subforum of this board has been completely opened up so all forum members can share their opinions, contributing to a better an opener community. The regular community members have so far behaved excellent.

The subforum for the Ubuntu NL Team, where the Team members and moderators used to have their discussions, has been split in two subforums. The conversations concerning the LoCo have been moved to a public subforum, the Ubuntu NL Forum Team have moved to a dedicated private subforum. This is done to make sure every moderator can freely express his or her opinion, without having to be afraid of the repercussions when the forum members would find out who was in favour of which decision.

The moderator team has changed its name and was extended by several members of the former Forum Delegation. They are now called the 'Forumteam', which describes the team's purpose better. A moderator is more someone who is constantly following a conversation and intervenes when necessary. This is not possible on this forum, because there isn't always someone present who is responsible for this. Our time is limited since we are volunteers. The 'Forumteam' first consults before a punishment for a breach of the rules is enacted. At least every moderation act is reported, to make sure the other members of the 'Forumteam' are notified.

The IRC Team are the channel ops who try to keep the #ubuntu-nl* IRC channels helpful and friendly.

Irc services have been part of Ubuntu-NL since the beginning in 2004.(?)

Number of visitors, some statistics?

Our main form of communication is via our mailinglist and we have a monthly IRC meeting.

The drawback of (re)starting the Dutch Translation Team from scratch was that there were no experienced translators left, leaving no one to go to for advice. This has improved with time when new translators gained experience, but it did hamper the collaboration with upstreams.

The Dutch Translation Team has recently completed the translation of the Ubuntu Manual Lucid Lynx (162 pages). It will be published shortly, after the final editing is done. We feel that this is a valuable project for new users, who might know very little about Ubuntu. Its sequential nature makes it easier to follow than, for example, wiki-pages where users can navigate in circles and get lost easily.

The Dutch Translation Team is currently working to improve its collaboration with upstream translation teams—most notably GNOME NL—to make sure more users will benefit from our translations, not just those who use Ubuntu. Our most important projects with regard to this are listed below.

One of the big successes of this approach was the two-day translation sprint in preparation for Maverick. This was coordinated with GNOME NL, who had translated several programs during their own sprint a week before. These translations were then imported manually into Launchpad for Maverick and have made it into the release on time, saving the Dutch Translation Team a lot of time and work.

We were then able to focus our attention on the remaining packages, and managed to translate more than 800 strings and completing about a dozen packages in just two days. The completed translations were subsequently submitted to GNOME and have since been accepted. This was mostly coordinated by Hannie Dumoleyn, who is a member of both GNOME NL and Ubuntu Dutch Translation Team.

A first effort has been made to contact the Debian-translators to synchronise package descriptions and packages like 'apt' and 'dpkg'. This is, however, still in a very early stage.

The Dutch Translation team has also adopted several orphaned upstream translations, including quite popular ones like XScreensaver and Compiz. These translations will benefit both Ubuntu users and users of other distributions.

Our immediate goals include improving and extending our contacts with upstream projects, so that we can keep contributing back to them. We also plan to modify and extend our wiki pages—especially the introductory page Launchpad sends to new translators—to make it easier for one-time translators to contribute. This will also reduce the amount of double translations that are done for packages that are translated upstream, and thus will never be used. This has caused some irritation in the past.

We also plan to complete the translation of the Ubuntu Manual for Maverick as soon as it is released. Our long term goal is to completely translate the package-descriptions for all applications that are available through the Software Center.

Articles are not only created and maintained by members of the Ubuntu NL Documentation Team, but also by other community members. New items are delivered via the page: Articles in progress.

The Ubuntu NL Documentation Team is working on plans to make it easier for community members to get involved in creating and improving documentation.

The Artwork team is currently working on a new theme for the SMF 2.0 forum software. A live demo of this theme can be found here. Please keep in mind that the theme is still under development, so some pages won't look like they should.

They are also developing a new map. This map shows all the 'Steunpunten', support points, registered on the forum. People can click the nearest support point and send him/her a message for help. The current map can be found here, this is a screenshot of the new map that's still under development.

The Ubuntu NL news site, called Prikbord, was launched in december 2006, as part of the new website. The aim of Prikbord is to publish announcements and news for the Ubuntu NL community. Every month, a community member tells about his personal life and appoints the next Ubuntero of the month.

In the future, we will expand the number of active Prikbord contributors. At the moment, there is only one active editor.

Ubuntu NL is supporting one of its community members with the founding of a new LoCo 'Ubuntu Fryslân', which wants to serve the province of Friesland in the North of the Netherlands, where the main language is not Dutch but Frisian.

Some forum members have been running an effort to collect redundant PCs in the Netherlands. The collected PCs were subsequently shipped to Africa, where a community member helped with installing the computers, of course using Ubuntu. The project was run in 2008 and again in 2010. The initiative featured on national television, as part of a series by broadcaster RVU. A video at YouTube can be found at http://www.youtube.com/watch?v=7kBjvMANvr4.