Differences between revisions 106 and 109 (spanning 3 versions)

Ubuntu’s error tracker explains crashes, hangs, and other severe errors to end users; lets them report an error with the click of a button; and collects these reports from millions of users to show Ubuntu developers which errors are most common. It’s all open source, and you can help.

In System Settings, the “Security & Privacy” panel should contain a “Diagnostics” tab for error and metrics collection. 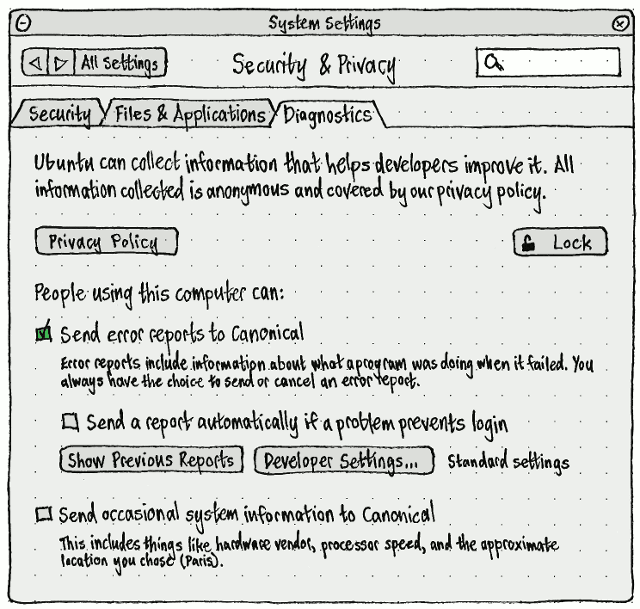 In a backport to Ubuntu 11.10 and earlier, a standalone “Privacy” window should contain equivalent controls for just the error collection. 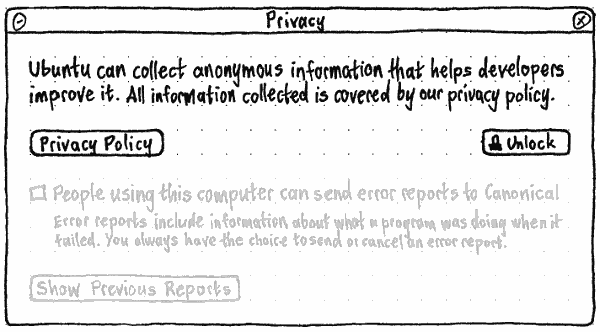 (Error reports are also accessible to trusted Ubuntu developers who are not employed by Canonical. This is covered in the privacy policy.)

In these cases, the “Show Details” box should show details of all the errors, with separators between them.

When there is not enough memory for a core dump

When an update is available to fix a crash

When a crash (whether of an application or OS package) occurs, “Send error reports to Canonical” is checked, and Ubuntu hasn’t previously submitted this particular crash signature, it should send a basic crash signature to the server. 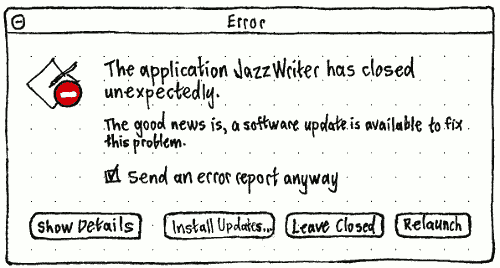 Choosing “Install Updates…” should launch Software Updater (leaving the application closed, if it was an application crash).

We also considered changing the Software Updater UI to appear unprompted sooner, or to have custom text, when updates are known to fix problems users on your system have submitted. We decided against it because it would be less obvious.

When there is a debconf prompt

debconf prompts for user-installed software in Ubuntu are, overwhelmingly, programming mistakes. Therefore, they should be presented as error alerts.

The primary text should depend on the type of package and the situation:

This has nothing to do with error tracking, but is included here because the error tracker provides all the rest of debconf’s graphical UI. 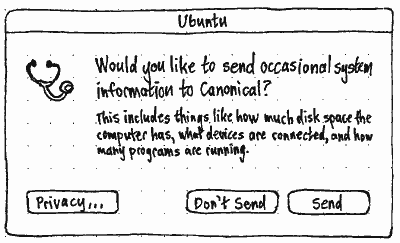 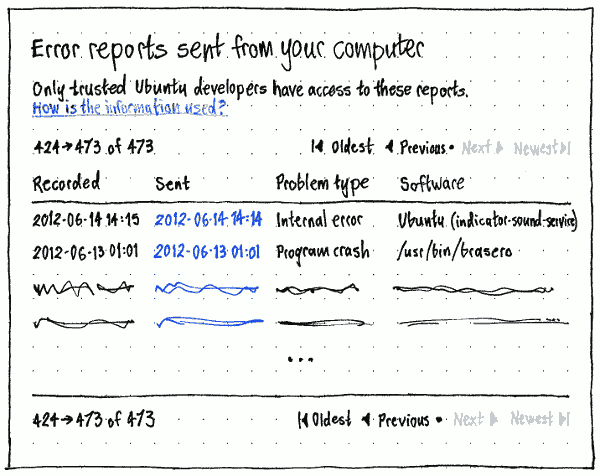 The apport client will write a .upload file alongside a .crash file to indicate that the crash should be sent to the crash database. A small C daemon (currently "whoopsie", previously "reporterd") will set up an inotify watch on the /var/crash directory, and any time one of these .upload files appears, it will upload the .crash file. It will do this if and only if there is an active Internet connection, as determined by watching the NetworkManager DBus API for connectivity events, otherwise it will add it to a queue for later processing. 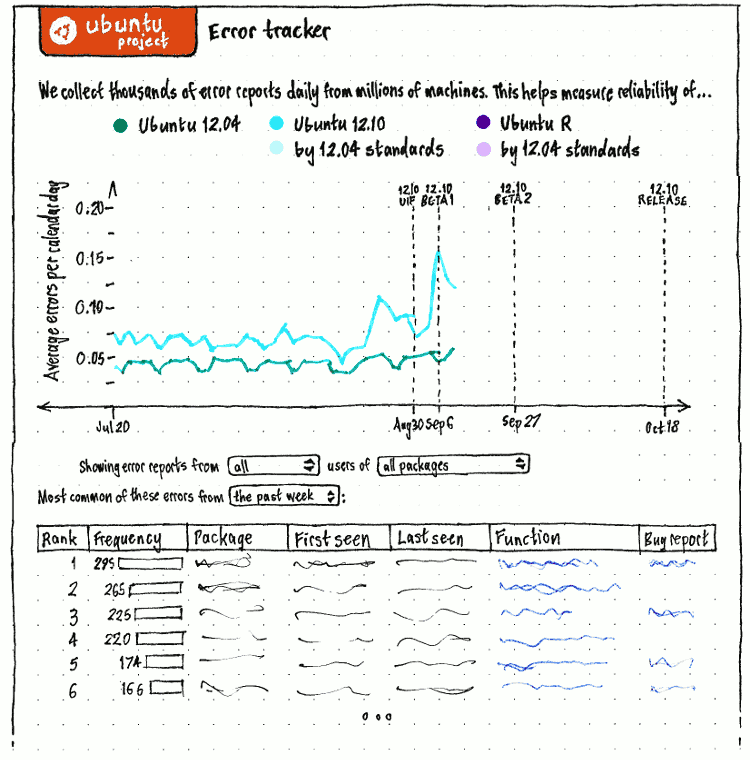 Next should be controls for changing the graph and the table. A spinner should appear at the trailing end of the first row whenever the graph and/or table are being updated.

The package combo box should have menu items for “all packages” (the default), “-proposed”, “ubuntu-desktop”, and any other useful package sets. The text field should accept either any of these special names, or a package name. If the text (once space-stripped and lower-cased) does not match any of those when focus leaves the field, it should flash red and have no effect on the graph or table, but should retain its contents so you can correct typos. Whenever the package combo box value is a single package name, the spinner should appear until a menu appears listing package versions to filter on, with the default being “all versions”.

Finally, the table should appear.

For both the graph and the table, whenever one of them is loading, is interactively updating, or failed to load, it should be semi-transparent. If the table fails to load or update, an error message should also appear alongside the table filter controls if there is room, or below them otherwise: an error icon, the text “Sorry, the table data didn’t load.”, and a “Retry” button (bug 1060037).

There are a few components to the error reporting system. To understand where to make your contribution, first understand how all the pieces fit together.

A program on your computer crashes. What happens next?

"Python exceptions are easier, so lets start with those..." Make this the "detailed explanation.

How can I test this?

To see this in action for yourself, simply send any process the SEGV signal: