Differences between revisions 21 and 30 (spanning 9 versions)

Feisty Fawn, the current name of the latest development branch of Kubuntu, will expand on the brand new infrastructure that has landed in Edgy as well as branching out in some exciting new directions. Feature development in the Feisty Fawn release will be improvements to hardware support in the laptop, desktop and high-end server market, and aggressive adoption of emerging desktop technologies.

Herd 2 is the second in a series of milestone CD images that will be released throughout the Feisty development cycle as images known to be reasonably free of CD-build or installer bugs. They represent very current snapshots of Feisty. Kubuntu 7.04, Feisty Fawn, Herd 2 releases can be downloaded from the following URL:

Screenshots are available at: http://www.thecodingstudio.com/opensource/linux/?q=node/55

Feisty Fawn Herd 2 CD release brings with it many new and exciting applications. For this latest release of Kubuntu 7.04, usability looks to be the common theme. Besides usability there have been updates to many common applications as well as a changing in the default database application in Kubuntu. With every new pre-release, updates will be documented allowing you to thoroughly test your Kubuntu 7.04 installation. Remember that all of these features are part of a pre-release version of Kubuntu, and may still have issues. We ask that any problems you come across that you file a bug, if one has yet to be filed for your problem.
https://launchpad.net/distros/ubuntu/+filebug

NOTE: The following image displays the box after the user has typed kdesu rm -rf / at the command line. This was done for humouring purposes only and if followed through with, would have removed a majority of the system files the computer needs in order to run. Please do not try this at home! 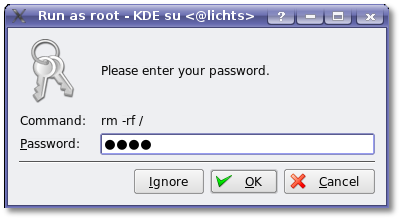 No more confusion with multimedia applications in Kubuntu. With 7.04 applications such as KsCD (CD player) will not be installed by default since Amarok provides the abilities to play CDs. KAudioCreator has also been removed for ripping CDs since the CD burning application, K3b, offering these same exact functions and more. Kaffeine has removed the audio shortcuts on first load, providing the user with a standalone video playing application.

When using the Konqueror file manager, when you are in the / (root) partition, the /home (home) and /media (media) directories will display custom icons letting you know they are two of your main working directories.


Kexi, an integrated data management application, is an open source competitor for products such as Microsoft Access and OpenOffice.org Base. Kexi is now the default database application in Kubuntu 7.04, and is the first step in implementing the specification for KOffice by default. Kexi can be used to create database schemas, insert data, perform queries, process data as well as create custom forms to provide an interface to your data. All database objects (i.e., tables, queries, and forms) are stored in the relational database, allowing the ability to easily share data and design.

Kexi has been shipped by default in the WinFOSS application. WinFOSS is the portion of the Desktop CD, that when loaded in Microsoft Windows, will provide you with the options to install Free and Open Source software for Windows.


digiKam is an advanced digital photo management application for KDE, which makes importing and organizing digital photos a "snap". The photos can be organized in albums which can be sorted chronologically, by directory layout or by custom collections. This latest release, version 0.9, brings bug fixes, new and improved features, better camera support, and much more. More information on what the latest version contains can be viewed at http://www.digikam.org/?q=about/features09x

Xmodmap will now be loaded on startup. This means that it will be easier for the user to map their function keys which were not mapped by default. Xmodmap can also be used to map the extra buttons on the user's mouse.

Ubiquity, the graphical installer for Kubuntu, has been ported over to Qt 4. This is just one of the first steps for preparing future Kubuntu releases for the new KDE 4 which will be released in the mid to late portion of 2007.

Zeroconf by default means that Kubuntu 7.04, out of the box, will run network applications without any major settings on the user's part. For instance, you can play KBattleship without having to search for a server.

Kubuntu 7.04 will bring for the first time, seamless upgrading to the latest version. In the past users had issue from upgrading from 6.06 (Dapper Drake) to 6.10 (Edgy Eft). This will be no more (note that the use of 3rd party repositories or 3rd party applications may still cause problems which are not of Kubuntu's fault), now it will be easy to update to the latest version, and Adept will even let you know. NOTE: At this stage Adept is a work in progress. It has been noted that upon clicking Next will cause the application to crash.

Guidance, the Kubuntu power management system, has been updated to allow a user to select how they would like their CPU to scale while using the power of the battery of their laptop. This function will allow the laptop to run longer while on battery.

We want to hear what you think about the current release of Kubuntu 7.04, The Feisty Fawn, Herd 2 CD Release. We want to know if it Rocks, if it is just OK, or it is flat out wrong. No matter the feedback, as long as it is in line with the Ubuntu Code of Conduct we would like to hear it.