The focus of 9.04 for the Kubuntu community will be delivering a clean polished user friendly KDE4 Desktop. The plan is to continue migrating much of our existing Kubuntu software to KDE4 offering a smooth out-of-the-gates KDE 4 interface. Jaunty is the first dazzling step into the future of desktops with innovation not seen anywhere else.

Alpha 4, the fourth in a series of testing CD images that will be released throughout this cycle, represents the very latest snapshot of Jaunty Jackalope. The pre-release images are known to be reasonably free of major undocumented CD-build or installer bugs, however they are not recommended for use in stable environments. These releases will be for those who are developing, documenting, and testing. Alpha releases can be downloaded from the following URL:

NOTE: This is an alpha (pre-) release. Pre-release versions of Jaunty are NOT encouraged for anyone needing a stable system or for anyone who is not comfortable running into occasional, even frequent, breakage. Pre-release versions of Jaunty ARE recommended for Kubuntu developers and those who want to help in testing, reporting, and fixing bugs.' Please do not use this in a production environment with data or workflows that you cannot do without

New or Improved In Alpha 4

The Jaunty Jackalope Alpha 4 CD release brings with it a brand new desktop as well as many new fixes and applications. For this latest release of Kubuntu 9.04, we are exploring some new changes . Besides these changes, there have been updates to many common applications as well as bug fixes to some of those annoyances you may or may not have run into. With every new pre-release, updates will be documented allowing you to thoroughly test your new Kubuntu test installation. Remember that all of these features are part of a pre-release version of Kubuntu, and may still have issues. We ask that any problems you come across that you file a bug, if one has yet to be filed for your problem.
https://launchpad.net/distros/ubuntu/+filebug

KDE has recently released version 4.2 of their amazing desktop environment. There are many changes including bug fixes, new functionality, and more. Some of these changes include, but are not limited to:

For complete details of the KDE 4.2 release, please consult http://kde.org/announcements/4.2/ . 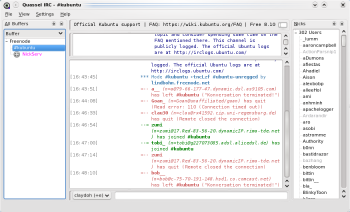 Quassel is the new IRC client that is now the default for Kubuntu and is now available on the CD. While Quassel is a split client-core application, it works very well as a standard, standalone IRC client. A quick How-to can be found here

The issue in the previous preventing the coexistence of Amarok2 and Kmail/Akonadi has been addressed, so now both can be installed together.

Amarok 2 is currently sitting in the Universe repository (not installed by default, but will be by the final release), so please install it, test it, and let us know what you think by filing bug reports. Please note that Amarok 1.4 is no longer available. 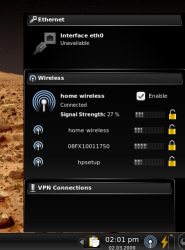 Alpha 4 contains the new plasmoid-network-manager for testing. The older, knetworkmanager panel applet is still available, but will no longer autostart.

Kdebluetooth has been updated and is back in Alpha4, but still needs work and lots of testing as well, so please give it a try and help out by filing bug reports.

We have decided to bring back Kubuntu Documentation in the hope that people will look at KHelpCenter for Kubuntu documentation. We still need volunteers to help update the information included from KDE 3 to KDE 4-based applications

We want to hear what you think about the current release of Kubuntu 9.04, The Jaunty Jackalope, Alpha 4 CD Release. We want to know if it Rocks, if it is just OK, or it is flat out wrong. No matter the feedback, as long as it is in line with the Ubuntu Code of Conduct we would like to hear it.