The Magic Trackpad is a multi-touch trackpad produced by Apple Inc.

It can be used as a single-touch device in Ubuntu by pairing it using the Bluetooth utilities in Ubuntu. The following setup instructions only need to be followed once, then Ubuntu will recognize the Magic Trackpad without further configuration.

Also note the nubs on the underside of the trackpad act as the mouse button - the two rubber pieces act as such when you press *on* the device itself.

You can confirm that gestures are recognized by following the directions here:

In order to use this device with other multi-touch software, you will need to know its input device name and number.

Here is example output for lsinput with a Magic Trackpad present (other irrelevant input device removed):

For more information on testing this device for multi-touch support, see Multitouch/Testing.

Once you've confirmed the above, you can try using PyMT.

Once you have inserted batteries in your Magic Trackpad, if your system is Bluetooth-capable and its radio is enabled, you will see a dialog box asking for a PIN to pair it: 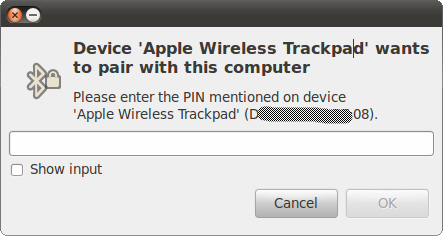 Such pairing can be forced by pressing and holding the button at the top-right side of the tablet.

You need to provide 0000 as the PIN code and press Enter to pair the trackpad. Once this has been done you need to permanently authorize this device to pair with your system. You can do so by going to the Bluetooth applet and choosing Apple Wireless Trackpad > Connect: 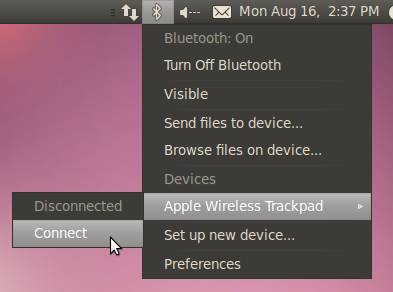 You will then be asked to confirm authorization to connect from this device. Make sure the "Always grant access" checkbox is ticked and click on Grant:

Once these steps have been completed the trackpad will remain available in Ubuntu.

Problem: Pairing does not persist between reboots on Maverick (10.10)

If you find that you are not being prompted to "Always grant access" and that the device is not available after a reboot (i.e., you have to reconnect), try adding the pincode for the device (0000) to /var/lib/bluetooth/<physical_device_ID>/pincodes, like so:

First, verify that your Bluetooth radio is indeed on. Open a terminal window and issue the following command:

The above example output shows what you would see if / when your Bluetooth radio is detected and enabled.

Next, let's scan for nearby Bluetooth devices. Note you must press the pairing/ON/OFF button for approximately 10 seconds on your Magic Trackpad for it to enter "pairing" mode. A small green light will start flashing.

The above output has important information. The bluez-compat package needs to be installed before requesting pairing:

Then we can use the "XX..." string to request pairing of the trackpad:

There should be no output after the above command, however your trackpad should now be recognized and act as a single-touch device.

By default, it's possible to pair the Magic Trackpad and use basic mouse-like functionality with the regular left-click being available via the physical click only; tapping and scrolling will not work. As of September 8th, with the unsupported 2.6.35 (Maverick) kernel from the Ubuntu Kernel Team PPA, all expected basic functionality (two-finger scrolling, tap to click, right and middle click emulation through two and three finger taps respectively) works by using the "synaptics" X driver.

The Long Term Stable version of Ubuntu supports the Apple wireless Keyboard and the wireless Trackpad. While automatic pairing of Ubuntu to the keyboard is as you might expect, pairing with the Trackpad is not quite so intuitive, until you realise what may be happening... With the wireless keyboard, the Ubuntu Bluetooth utility asks you to type a random six digit security code on the keyboard, to enable the pairing. This is not possible with the Trackpad! The Trackpad his an ínbuilt code of ´0000´.

Pairing the Bluetooth Trackpad to Ubuntu 12.04:- Within the Settings | Bluetooth utility, first press Add (+) and Continue | PIN Options | ´Fixed PIN 0000´ and then Close (start searching) BEFORE starting-up the Trackpad registration (pressing-in its power button for several seconds). You need to specify ´Fixed PIN 0000´ BEFORE the System Administrators Trackpad is found and added to the selection list by Ubuntu! It appears that the fixed PIN is behaving like a filter for any incoming Bluetooth pairing requests; that when Ubuntu knows this, it accepts the Trackpad (default of ´0000´) and pairing then completes automatically as you would expect. This pairing is persistent between system re-boots and powering off-on, though you might wish to have a spare USB keyboard and mouse available, just in case. On top line of the Ubuntu screen you should select the appropriate Macintosh keyboard for your locale, especially if wishing to access some of the more quirky keyboard characters during login (@ or # or currency symbols).

Having paired Ubuntu Bluetooth and the Magic Trackpad, you have a physical right and left click, normal scrolling with a single or double click, also two-finger scrolling going up and down an list, or sideways on a screen, or zoom-in or -out, also a three finger gesture to grab the current screen and relocate it on the desktop (nearly as flexible as the iMac´s OS X). Regrettably, when you switch between Linux Ubuntu and Apple OS X, you are obliged to re-pair the keyboard and trackpad afresh - a little niggle worth paying, if you prefer the greater contrast and larger characters of Ubuntu on the iMac 27¨ super high definition screen.

2) Download the attached Ginn wishes file wishes.xml and save to your home folder. Replace /etc/ginn/wishes.xml with the downloaded version.

As ginn is a little unstable at present, the ginn-wrapper script can be used to automatically restart ginn if it crashes.

If you are running 10.10 and want to switch from gesture support to traditional trackpad support, add this section to /etc/X11/xorg.conf, creating the file if necessary: