Originally born in Virginia, currently residing in Brooklyn, NY, I am an artist who decided that I could not afford to use proprietary software and I was not going to use illegal software so I turned to FLOSS, specifically Ubuntu Linux. I recently bought a new laptop to serve as my primary computer, a LaptopTestingTeam/FujitsuU810, which is also cutting edge hardware that I am testing and working on in attempt to get all the fancy tablet bits working properly. It is loaded with Gutsy Gibbon, in KDE style, yo!

After an invitation extended from JaneSilber, I participated in Roundtable Discussions which explored the process by which businesses arrived at using FOSS and the practical advantages and challenges of doing so. Additionally, my particular contributions had to do with highlighting the strengths of Ubuntu as a community and the processes by which adoption of Ubuntu has been achieved in several small businesses as well as amongst students.

AS an observing member, I was able to make connections with attendees who were preparing to travel to Geneva for a Worldwide ICT seminar which involved Young people. This created an opportunity to have a presence on the floor of this conference. This produces an opportunity to influence and inform the next generation of ICT decision makers for many countries across the global.

I gave a presentation and lead a discussion about Kubuntu for the Unigroup in Downtown Manhattan. Topics of discussion included the naming conventions for releases, default applications and settings for Kubuntu, applications and usage examples for specific purposes ( artistic endeavors) and the overall success of serving Ubuntu's target group. This included anecdotal evidence supplied by family members I have converted to Ubuntu Linux Users.

I made the official flyer to help promote the event. 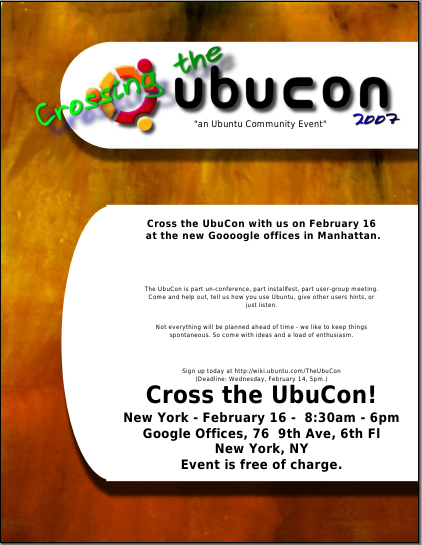 CoreyBurger assisted in arranging for me to speak at FactFest2006. Originally, I was scheduled to give a presentation on the subject of making a transition to using GNU/Linux specially focusing on default KDE applications contained within Kubuntu. As part of this presentation, I was prepared to explain the process of receiving support from various methods within the Community. As the greatest strength of Ubuntu or its community, my presentation emphasized UbuntuForums as well as using the IRC channels #ubuntu, #kubuntu.

Alas, the organizers did not feel that there was a significant mass of a attendants to warrant multiple speakers in different rooms, therefore they made a last minute decision to lump Sam Folk-Wilson from Fedora Core, Ian Turner from Zamanda, Mark Drago from LILUG and myself into a panel discussion. The audience and the moderator lead us into providing educational information about the GPL, opinions about the recent Novell/Microsoft deal and I was able to convey information about the Ubuntu community and the manner in which we operate.

I attended the UNITAR Symposium on ICT Policy Issues for Development on 29 August 2006 at the UN Headquarters in New York, New York. Presenting demonstrations of Ubuntu and Kubuntu and answering questions about Ubuntu Linux along with OgMaciel. All attendees received a Dapper Drake 6.06 LTS CD.