Differences between revisions 53 and 59 (spanning 6 versions)

USlab is a fork of SUSE Enterprise Desktop 10's new menu applet and application manager codenamed "Slab", but modified to fit in better in the Ubuntu enviroment.

UPDATE! I recently merged in the upstream bug fixing/performance work that has been going on upstream. This is still very beta, but let me know if you have any issues. --KevinKubasik

Check out this thread of satisfied customers!

places.patch , if you want to replace the non-functional "Recently Used Applications"

sklp: Wouldn't it be better to provide a patch against SLAB-cvs so that if upstream make changes, we more easily benefit from them ?

2. Go to slab folder extracted into USlab folder in a terminal

Add to your sources.list:

Then run in a Terminal:

Slab is the codename for SUSE Linux Enterprise Desktop 10's new menu and application managment system. It consists of 3 parts: main-menu (the new menu applet), Control Center and Application Browser, a nice simple and easy to use interface which uses our existing menu system to present all options for preferences and applications right in front of you with nice big icons! The 2 sections are also searchable with this neat little search box, automatically narrowing down options to what you want based off title and descriptions!

I originally discovered that it was in the Gnome CVS repository in this Ubuntu Forum thread:

But then I thought...this would be PERFECT for a distro aimed at newer users of Linux!

So then my Evil...I mean Excellent plan begun...

Better Desktop is a project sponsored by Novell to do usability tests on portions of the KDE and Gnome. The new main-menu applet and control-center (codenamed Slab), were designed using this data to improve usability on the Gnome desktop. Ubuntu has been doing usability changes to Gnome as well to make things more usable. Slab would be the perfect addition to the desktop as it adds a nicer and cleaner menu system that looks alot more friendly. It even features intergration with Beagle, our desktop search system!

--Note360- Do note that their is a awsome menu from chandlers. http://www.ubuntuforums.org/showthread.php?t=222546 At the moment it is being updated on the hour.

This specification deals with improving the usability of the default Gnome desktop included with Ubuntu. Many operating systems have been moving away from cascading menus for accessing applications, so it may make sense that Ubuntu should do that too. 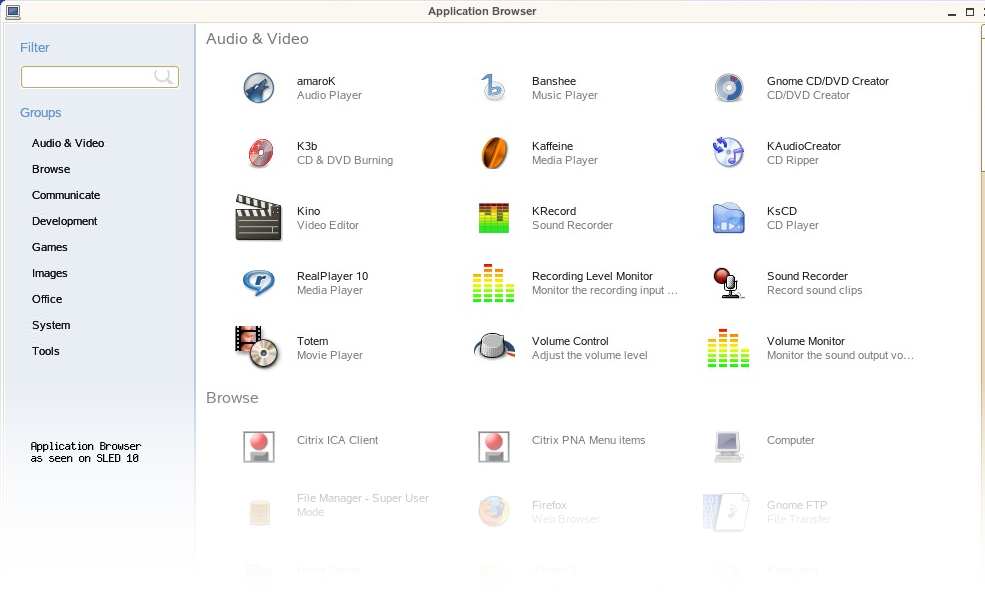 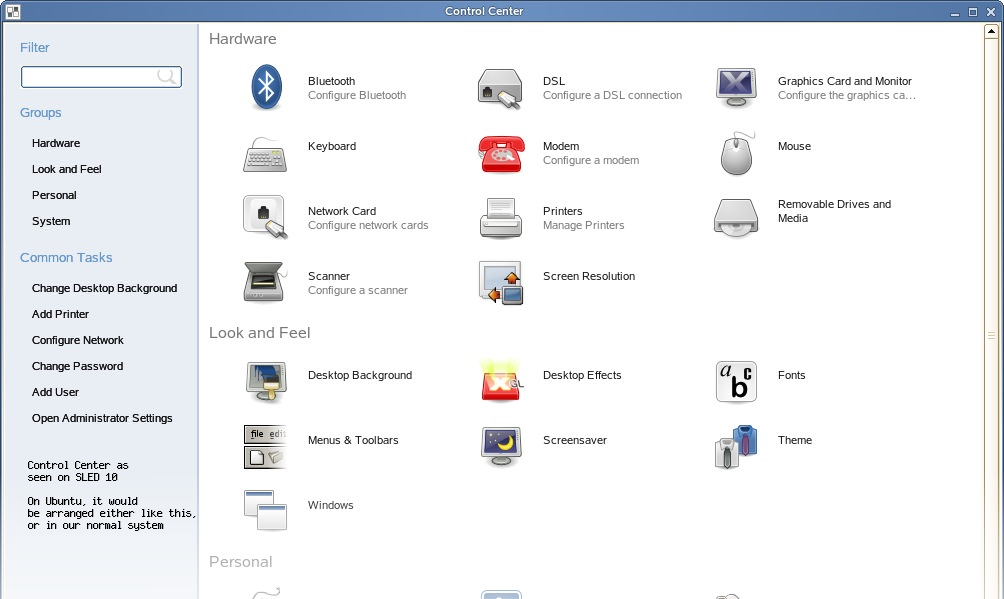 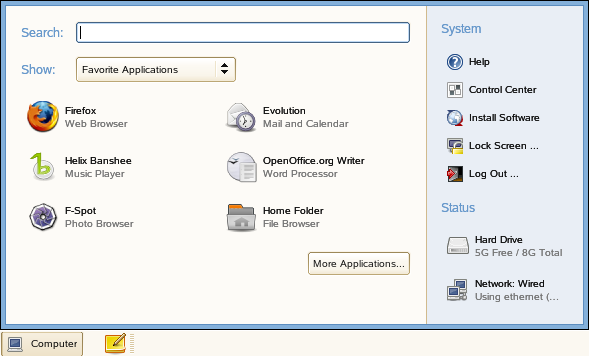 We would not only by default offer Main Menu in the corner as a replacement for the current menu applet, we would also put links to Control Center and Application Browser right next to the menu, but also on the desktop for easier access.

I'm starting to think that Chanders's "Ubuntu System Panel" should be included alongside Slab as a power-user option in addition to Slab...

DONE, As of Beta 3, the button now reads Computer, but keeps the Ubuntu icon

We could change it so that the applet displays the word "Menu" instead of "Computer" and change it to use distributor-logo as the icon instead of computer.

EvandroFernandesGiovanini: Is there a specific reason you think this is a good idea? I think it would be nice to be consistent with SLED unless there's a good reason not to.

Yes there is, we've always (well, since Hoary) had the Ubuntu icon grace the main menu, and it even got a redesign on Dapper! We don't want to let a great icon go to waste suddenly. Also, we should keep things clear, I personally think that "Menu" would make a better label. - viper550

I really think it would make much more sense to keep the Computer icon at the side of the text Computer. Also, I don't see the need to change things that are not Ubuntu compatibility issues (like ZEN-->APT etc) . - sklp

By default, it integrates with Zen Updater, SLED 10's new RPM managment system, offering options to upgrade or remove the application in the right click menu.

We would have to make a decision, should the functionality be removed, or we could make it so that it intergrates automatically with our current "Add/Remove Programs" tool? I am kinda crossed between both actually...

ChristofferSørensen: It is easy to change it to Add/Remove Programs and I think we should use that instead. Using Zen Updater makes no sense.

ChrisWoodall: Inorder to change the add/remove to synaptic or add/remove here is what you do:

1. Open up the configuration editor (gconf) 2. Go to desktop -> gnome -> applications -> main-menu 3. Click on system-area and then edit value next to package_manager_item to

4. Logout and in again 5. CONGRATULATIONS Synaptic / Add/Remove now works with the slab

We may want to look into using this implementation of the ubuntu control center:

ChrisWoodall: Inorder to change control center to the Ubuntu Control Center: 1. Open up the configuration editor (gconf) 2. Go to desktop -> gnome -> applications -> main-menu 3. Click on system-area and then edit value next to control_center_item to

4. Logout and in again 5. CONGRATULATIONS Ubuntu Control Center now works with the slab

baskus: I see no reason to replace SLAB's control center. I like it better and novell will keep developing on it to make it even better.

DONE, Next Build will include a patch I found to replace "Recently Used Apps" with Places

My idea is that we replace the Status segment (which is pretty useless, there are easier ways to find network status and disk space readings), with a Places list (emulating our current one) but in list forn.

EvandroFernandesGiovanini: I disagree that displaying disk space and network status information elsewhere is easier. Novell's usability testing showed that people were having trouble finding that information in the old setup. I also don't think Places needs to be there by default. Beagle integration is a major feature for slab, and with beagle people don't have to worry about the filesystem to do their work. Of course, there will always be people that do care, and for them maybe slab could be extended, or a new panel applet could be developed (a "Places" applet that pops up a simple menu with nothing but your bookmarked folders).

Or...we could add an extra catergory to the dropdown menu for Places, or if we can't implement it properly, we could replace "Recently Used Applications" with it. -Viper550

MichaelAnckaert: I suggest we keep everything the way it is, but add a Places item to the dropdown menu. Novell did a lot of usability testing and we should take advantage of this.

SergeySmirnov: It will be great to see all 3 items at the same time, insted of make a lot of mouse work using dropdown list, isn't it? My idea is use all 3 items in tabs. They'll be in menu accessible in one click. Also it will be cool to find applications, places and files by beagle in menu, insted of lounch new window. Can it be bealised in current version?

DONE, Recently Used Applications will be replaced with Places on the next beta

The Recently Used Applications portion of Slab requires a patch to gnome-desktop and gnome-panel. Someone on the Ubuntu Forums will be providing debs of the patched versions from what I hear. I'll keep you informed on this.

ChristofferSørensen: I find the favorite and recently used applications a bit confusing. Are your favorite applications not those that you use all the time? If so, there's no need for Favorite and we can get rid of one item in the drop down box.

TomHaddon: From what I've heard, you'd think this was the case (that recently used and favorite are the same thing), but Novell's user testing found it wasn't the case. Can't remember exactly where I head this, but I think it might have been on Ted Haegar's podcast - http://www.novell.com/company/podcasts/openaudio.html

ChristofferSørensen: I heard the gnome-main-menu podcast and Favorite Applications are like bookmarks. Now, I think I understand it better. The user will always have his Favorite apps easily available no matter what applications he has run recently.

sklp: I guess its a good change as we kinda need Places, but in the long term it would be better to include patched gnome-panel; so then we should have both Places and Recently used apps ?

TimothyMoll: I find that the "recently used apps" is an invaluable part of the slab to me, allowing quick access to apps that aren't bookmarked - it's quicker than going through the "more applications route". Novell decided to put it there after doing usability research, it'd seem a pity to remove it for less thought out reasons. I do agree that there needs to be an easy way to access places (and bookmarks), though.

In order for all the applications to appear consistantly (size wise) in Control Center and Application Browser, we would have to make 48x48 versions of each Application icon (if not already) and even larger versions of icons for settings modules. If the user sees a big icon in one place, but a small one in another place, they will be very confused...

This picture I made explains it all:

(note, since I do use Fedora Core 5, some of the options in there might not actually be on Ubuntu or may have a Bluecurve icon)

In the default Ubuntu menu, in the places menu, there is a "Connect to Server" button. This ought to be included in the Slab Menu, since many users use it, and it is noowhere to be found in Slab. You can run the same command from Nautilus under "File" but not enought people know about it there. I think that putting this in Slab will help its chances for inclusion in Egdy, or Edgy+1.

MichaelAnckaert: If we include the Places menu in the slab dropdown box, there won't be any need in for this button as it will be included in the Places Menu. Again, I suggest we don't change to much about the Slab menu as there has been a lot of usability testing going in this thing.