Differences between revisions 92 and 93

Sound in Ubuntu is based on PulseAudio. On the PC, its user interface includes the “Sound” panel of System Settings, volume notification bubbles, and the sound menu.

Apart from that, the “Ringtone” screen should consist of a non-scrolling “Stop Playing” button whenever you are not in Silent Mode, followed by a radio list of installed ringtones and “None”. “Stop Playing” should be sensitive whenever a sound is currently playing. The “Message received” screen should similarly contain a radio list of installed alert sounds and “None”, but without the “Stop Playing” button because the sounds are too brief for it to be useful. On both screens, choosing an item — even the already-selected item — should play the sound as well as selecting it. Similarly, turning on “Keyboard sounds” or “Lock sound” should play the relevant sound once as a preview.

The indicator should be a speaker icon the same as the title of the PC menu, except that whenever audio is playing, it should be preceded by a ▶ Play icon.

The menu should always show exactly only one set of playback controls, for the player that was playing most recently. For example, if audio is currently playing, the controls should be for that player. The Previous/Next buttons may or may not be present, depending on the player’s capabilities.

So that people can easily change sound volume and control music playback, there should be a unified sound menu taking the place of the Gnome mixer_applet2 and the notification area items for Rhythmbox, Banshee, and Amarok. 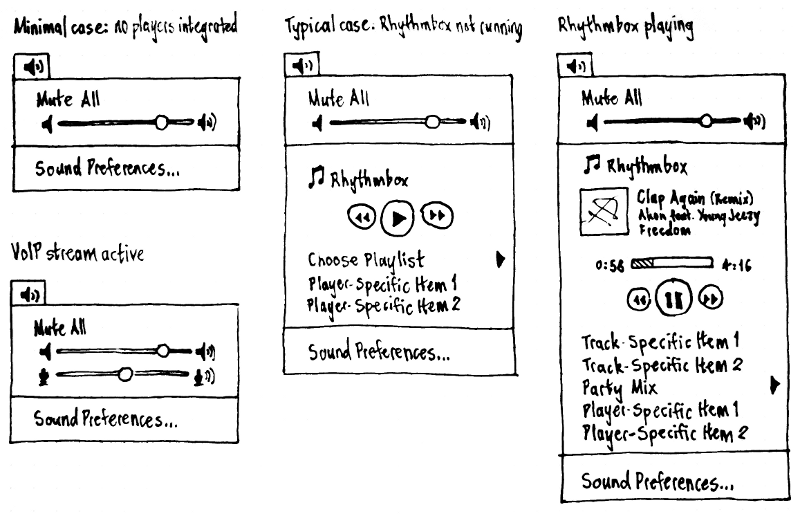 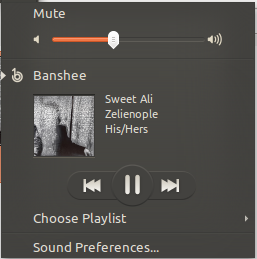 We also offer this design, and its associated APIs, to the Kubuntu and KDE communities as a foundation for a possible replacement of the kmix applet.

Beyond icons that are already included in themes:

At the bottom left corner of the System Settings “Sound” panel should be a checkbox, “Show sound volume in the menu bar”. It should be checked by default for a new user account. Whenever it is checked, the sound menu should be present in the menu bar.

Whenever there is no primary sound output device (because no available output devices have been detected yet), the title of the menu should be audio-output-none-symbolic (in the default theme, an outline version of the speaker icon), and its accessible name should be “Volume (no devices)”.

If there are any available output devices:

“Unmute” should return all output devices to the volume settings they had immediately before “Mute” was selected. Either choosing “Unmute”, or changing any volume setting manually, should change “Unmute” back to “Mute”.

If there is a primary sound output device, the menu should contain an item for changing its volume, followed by a separator. The Up and Down keys should navigate between the volume item and other items, just as for a normal menu item. The item should highlight when navigated to, or on mouseover, just as normal menu items do, but the item should not be activatable (clicking it or pressing Enter should not close the menu).

Whenever the volume item is highlighted:

Implementation: The PulseAudio async API takes care of detecting different devices and whether there is sound coming out of them. There will be need to be a connection to either Pulse or HAL to detect the addition of new devices. This could be something like plugging in a new USB headset.

Any music player that advertises itself over http://mpris.org/ Mpris should have its own section in the sound menu. Multiple compliant music players may result in multiple music sections, ordered alphabetically by application Name. (In future, there may even be multiple sections for the same player.)

A compliant player should not be present in the menu merely because it is installed, but should insert itself as soon as you start actively using it (e.g. playing something with it for the first time, or adding music to its library). The player’s own settings interface should also have a checkbox for whether the player should be present in the sound menu right now:

Future work: Add a “Where?” button that shows you where the sound menu is.

A music section should consist of an item for the music player itself, followed by any or all of track-specific custom items, a playback item, a playlist submenu, and player-global custom items. Some of these items are present only when the player is running.

For the purpose of the following sections that describe these items, the active track for a player is the track that is playing, that is paused, or that would play if the Play command was given (if this is known ahead of time). At any time, a player may or may not have an active track.

This item should be present regardless of whether the player is running.

The first row of the item should consist of the application’s icon and Name. A player should also be able, in rare cases, to specify custom text in place of the application name (by changing the 'Identity' property string on the Mpris root interface to the full string desired).

Choosing the item should launch the player; if the player is already running, it should open or focus an existing instance. Whenever a running player does not have a sensible main window that could be opened or focused (as indicated by Mpris canRaise() = false), the player item should be insensitive. 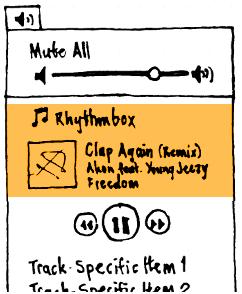 If the player is running and has an active track, the music player item should also include, below the player icon and name, the track or album art and three rows of text. If no track or album art is available, it should fall back to a generic track icon. The text should be on the leading side, and top-aligned next to the art. It should consist of the track name, artist, and album, one on each line (aligned the same way as the rest of the menu, regardless of what language each string is in). For each line, if there is not enough room in the menu to display all the text, it should be ellipsized in the middle; and if the data is not known, the line should be left blank. The player name and track data combined should be highlightable and activatable like a single normal menu item.

There should be a D-Bus API for exporting info about the playing track (not the same as the active track) for use elsewhere (for example, setting a custom IM status).

We need precise fonts, sizes, and spacing specified for these elements.

The API should let the music player provide up to three track-specific custom menu items — for example, for buying, “liking”, or “banning” the song currently playing. Any of these items may be a submenu containing other items.

When using a pointing device, whichever button is under the pointer should highlight in a similar way to a normal menu item in the same theme. When using the keyboard, the Play/Pause button alone should highlight in the same way. Pressing the Space key should visibly activate the Play/Pause button, and the Left and Right keys should visibly activate the Back and Forward buttons respectively. None of the elements should have a visible focus ring, and Tab and Shift Tab should not do anything.

When they are present and sensitive, the functions and accessible labels of the buttons should be as follows.

The MPRIS API should let the player expose icons and names of playlists, even when the player is not running.

The playlist item should be present in the menu only if the music player is currently exposing any playlists. If the player also indicates that it is playing (or is paused partway through) a playlist, the submenu title should be the name of the playlist. Otherwise, it should be “Choose Playlist”.

The submenu itself should contain items named for each of the playlists. Selecting an item should start playing that playlist.

The API should let the music player provide up to three player-global custom menu items, even when the player is not running. Any of these items may be a submenu containing other items, for setting equalizer settings for example.

The menu should end with a separator, followed by a “Sound Settings…” item that opens the Sound panel in System Settings. Launch feedback for this item should be exactly the same as when you launch an application any other way.

(If PulseAudio is not running when you choose “Sound Settings…”, gnome-volume-control should try to start it. If it fails, it should invoke Apport during the development cycle, or an error alert in a stable release. This is outside the scope of the menu; it should be part of the specification for the Sound Settings themselves.)

When you log in to a version of Ubuntu that implements this sound menu, and you are running a gnome-panel that includes mixer_applet2, that applet should automatically be removed from your panel configuration.

To register in the menu, each player needs to implement the MPRIS2 spec. The service which controls the menu automatically detects MPRIS clients appearing on DBus and reacts accordingly. It is essential that the implementation populates the DesktopEntry property on the MPRIS root interface. Access to the Desktop file is mandatory inorder to register successfully.

Registration will need to be disabled if a user would prefer for a certain player not to be controllable from the menu. Guidelines as to how this preference is to be represented in the UI of the client (specifically Rhythmbox, Banshee or Amarok) has been included below. We would like to provide a unified music player experience on the Ubuntu platform therefore we strongly urge application developers to follow this spec.

To remove a player from the menu the client can either use the dbus method 'blacklist-media-player(string desktop, bool blacklist)' on 'com.canonical.indicators.sound' (as of release 0.5.9) or alternatively it will need to write to the indicator-sound gsettings. The settings id is "com.canonical.indicators.sound" and the key is "blacklisted-media-players". The client should add the name of the desktop file (just the name, not the full path and minus the .desktop suffix) to this array of strings. The indicator sound service will remember each client (provided that it is not blacklisted) which has successfully registered so that when the media client is not running it will still appear in a hibernated state in the menu. Any successful changes to the blacklisted gsettings should be automatically reflected in the menu. A player can query its blacklisted state using the dbus api 'IsBlacklisted(string desktop-id)' (this will return a boolean depending on its presence in the blacklist obviously). Again alternatively you can just talk directly with gsettings. Please use the gsettings (either directly or through the dbus api) to save and fetch the state of a players permissions inorder to minimize bugs.

In order to test client registration, application developers should fetch the latest lp:indicator-sound release. As of release 0.5.3 this new way of registering has been implemented.

When a device is plugged into an audio jack that can’t distinguish between headphones/speakers, headsets, or microphones, Ubuntu should display an “Unknown Audio Device” dialog. 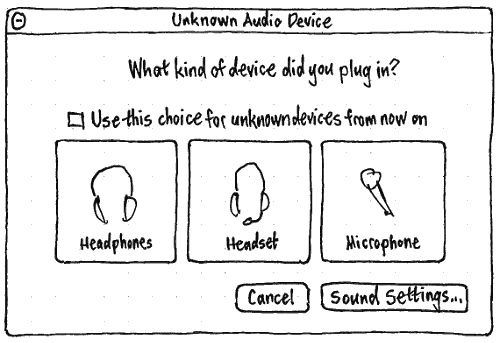 Various interface elements need to know what the primary sound output device is. For example, this is the device:

In implementation terms, this is the default PulseAudio device (device 0).

The primary output should depend on whatever happened most recently:

This definition does not yet take into account simultaneous use of multiple audio outputs (for example, headphones for an audio call and speakers for music).