Desktop users would benefit from a non-terminal solution to configuring and maintaining encrypted directories.

Currently the UI assumes that the user has installed ecryptfs-utils and configured Private or their home direcotpry. However ideally this will be abstracted to:

We suggest that the following functionality might be integrated into Ubuntu under:

perhaps as a new tab after Encrypted and PGP Passphrases.

Graphical configuration front-end utilities are needed for each of the following ecryptfs command line utilities:

Additionally, for proper desktop integration, a UI should: 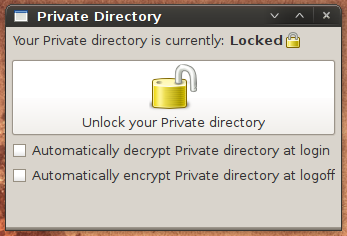 It's important that we are able to test new features, and demonstrate them to users. Use this section to describe a short plan that anybody can follow that demonstrates the feature is working. This can then be used during testing, and to show off after release.

There are a few items which would be nice and/or intuitive to have in an interface that configures encrypted directories, but lack underlying support in ecryptfs.