The UbuntuExpress installer appears as a window on the live CD desktop. It asks for your language, keyboard layout, name, login name, password, location and timezone, and partitioning details. The interface is written in Python, invoking backend routines to act on your choices.

The current installer is ugly and confusing, especially in the partitioning stage. We want people to be amazed at how easy and pleasant the Ubuntu installation experience is. We also want them to be able to get work done while Ubuntu is installing.

Since we'll be doing a Qt-based interface as well for KubuntuExpress, the user interface must be cleanly separated from the functional installer backend. The Guadalinex installer already does this quite well, but both the front end and the back end need significant work to meet our requirements.

The Live CD desktop contains an "Install Ubuntu Permanently" icon, consisting of an arrow overlaid on the Ubuntu logo. If there are any other icons on the desktop, the installer icon is the last one. 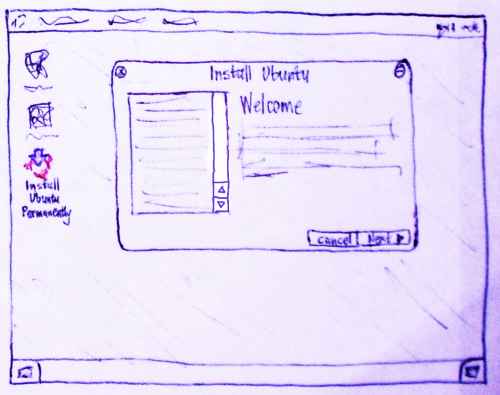 The installation window is not full screen, but just big enough to show the largest page (the partitioning tool). The window has the title "Install Ubuntu", and is not resizable.

Ensuring that the Live CD boot process and Ubuntu Express is accessible will enable users with disabilities to independently install and configure Ubuntu. Most of the work is actually done in gfxboot to provide an accessible Live CD session surrounding Ubuntu Express itself. For details see: UbuntuExpress/Accessibility.

The first page of the installer lets you choose your preferred language, for the installation itself and for your Ubuntu account. On architectures where language selection is available in the boot loader, this defaults to that language; otherwise, it defaults to US English. This page also displays a welcome message and explanatory blurb in the selected language; the message is updated live as the selection changes. (This eliminates the appearance of wasting time if you did choose the appropriate language in the bootloader.) 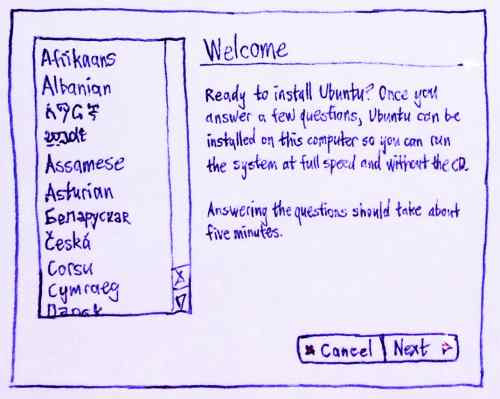 The next step is asking for the keyboard layout; the selected layout applies both to the rest of the installer (so that answers to later questions can be typed successfully), and to the login screen of the system itself once it is installed. The default choice is the most likely keymap for the selected language.

If there is time: When the list appears, it is scrolled so that the default choice is as close as possible to the middle of the listbox. 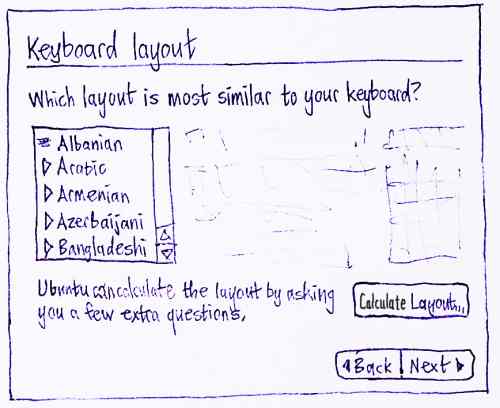 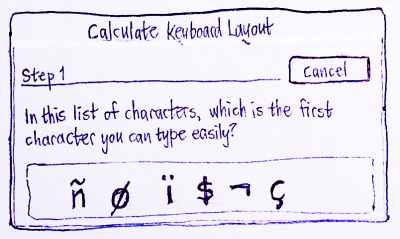 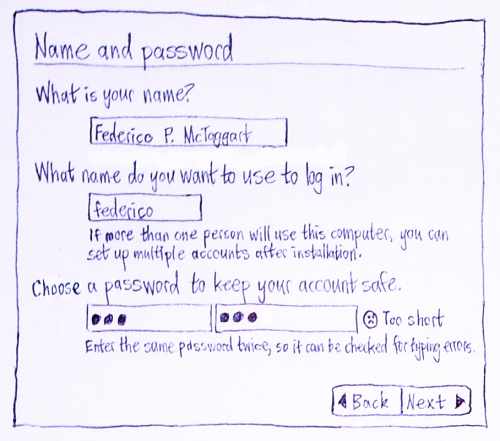 Until it is changed manually, the login name field is constantly updated to be equal to the first word in the person's name, converted to lower case and cropped if necessary to the maximum number of characters allowed. When the person first changes the field manually, it stops dynamically updating.

If "Next ▶" is activated while one or more of the fields have impossible values, no alert appears. Instead, errors are indicated next to the relevant fields with a mini red error icon ⊝ and a brief description of the error, and the first errant field should be focused (for mismatching passwords, this means the first password field). For example:

If there is time: The name and login name fields actively prevent invalid values, by ignoring impossible characters, and by ignoring further entry in the login name field if if already contains 16 characters. The password field is more passive, reporting errors next to the field but not preventing them; otherwise people may not notice the prevention, and may think they have entered a password different from the one that was accepted.

If there is time: If a password is entered that is too short, is found in a dictionary, or is easily derived from the real name or login name, this is indicated using a mini warning icon and brief warning text ("Too short." or "Too obvious.") next to the password fields, as soon as focus leaves the first password field. These warnings do not prevent you from continuing, and they are subordinate to the "Passwords must match." error message.

Future work: "Who will be using this computer?" -- multiple names at once, to encourage use of individual accounts. 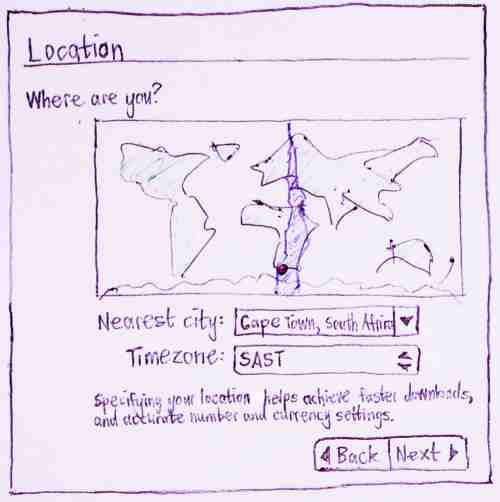 The "Time zone:" value should be text, not an option menu as shown in this mockup.

At a minimum, the map functions identically to that in the "Time zone" dialog of Gnome's "Time and Date" control panel.

If there is time: (for both the installer, and the "Time and Date" control panel itself) 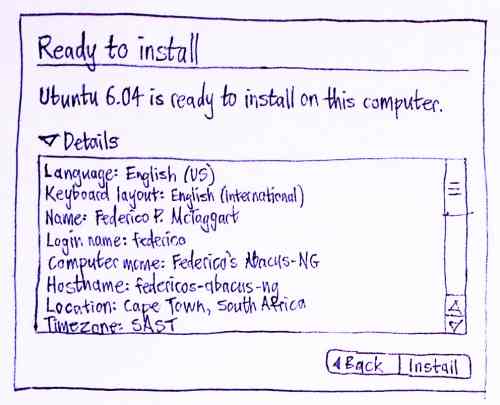 The final page summarizes the information entered in the previous steps, in a text box from which it can be copied for printing/e-mailing/etc. This box is hidden by default using an expander control.

The progress window contains a single progress bar that fills up only once. Partitioning is allocated 10% of the size of the progress bar; this may be tweaked if it is either too much or too little for most systems.

During installation of language packs, and only during that stage, a "Skip" button is present next to that text. This lets people avoid installing the language packs, without requiring a question to be answered about them. 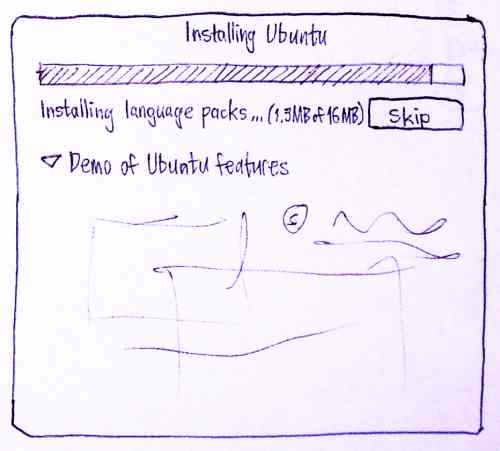 Future work: An animated demo of Ubuntu's benefits is shown during the installation process, à la Windows 95. The demo is in a section with an expander (expanded by default), so it can be collapsed for people who want to see just the progress.

I believe that both issues can be solved by borrowing infrastructure from oem-config, where I had to address similar problems and did so using a debconf protocol filter: debconf-using code (e.g. installer code) can be run unmodified inside a wrapper that runs custom user interface code rather than a standard debconf frontend, and translated strings can be extracted directly from the debconf database. -- ColinWatson

Aside from that, a quick glance over the Guadalinex code suggests that its user interface has reasonably good separation between frontend and backend: the frontend asks all questions up-front and then runs widget-set-independent backend code that feeds answers into the debconf database and performs the installation proper. (Integration with oem-config may suggest answers reaching the debconf database while the frontend is running, but that's OK.)

It has been decided not to include a page asking for the computer name in the installer, for several reasons.

If the page had been necessary, it would have appeared like this. 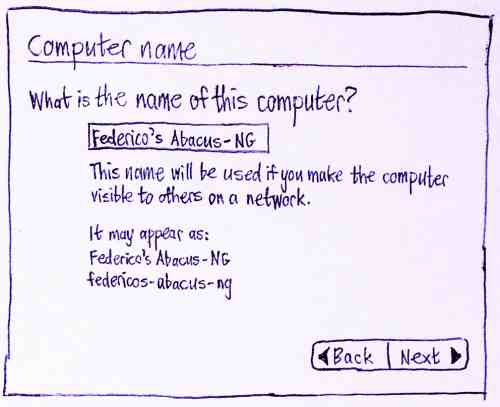 The field would have been restricted to ASCII characters. The name would have been used as-is for Avahi configuration, with a normalized version used as the hostname. The hostname would have had quote marks and brackets stripped, and other punctuation and spaces converted to dashes, this conversion being presented live during the input.

For alternative mockups of the "Personal information" and "Computer name" sections, see UbuntuExpress/GnomeUserInterface/Alternatives.