What do you think of Kubuntu 7.10? Keep comments brief, we usually can not respond to comments because there are so many but we do read every one.

* I regret to say that this release was a step back, and actually "converted" me back to Ubuntu (with gnome). No flame intended. There are just too many features that were a big deal in the overall Ubuntu release, but they were just included in Ubuntu and not Kubuntu. -Yoni

So not only Compiz does not work, but nothing 3D works with my ATI Radeon Mobility 9000 card which was working perfectly in Feisty with the Open Source driver. Yes, I agree this is serious! Gutsy has not been tested enough. As usual it is a nightmare for those having ATI cards. I take my share of blame for not having taking part on the HW testing, I just tested it in Virtual Machines.

I have been using Linux since 2001 and Ubuntu/Kubuntu since 2004. For the following reasons, I feel that Kubuntu 7.10 (Gutsy Gibbon) is a step backwards:

Don't get me wrong, I love Kubuntu. But, it just seems that functionality is slowly being replaced by someone's idea of "simplicity", which is not a good thing. Installing a new distro/release is a bit of work and I feel that developers should not compound that work unnecessarily.

There are a couple of sticky problems with Gutsy that I've found and from Googling, so have other people

I installed Kubuntu Gutsy i386, and this is my feedback: -- francesko

The installation went smoothly for me. I was disappointed with strigi, while searching for "my-file.pdf" (which exists) it returned a gazillion results, non of the first few files were pdf documents. I unistalled it and installed google desktop instead. --AChaudhuri

the OpenOffice splash screen isn't blue like this screenshot of Tribe 4: 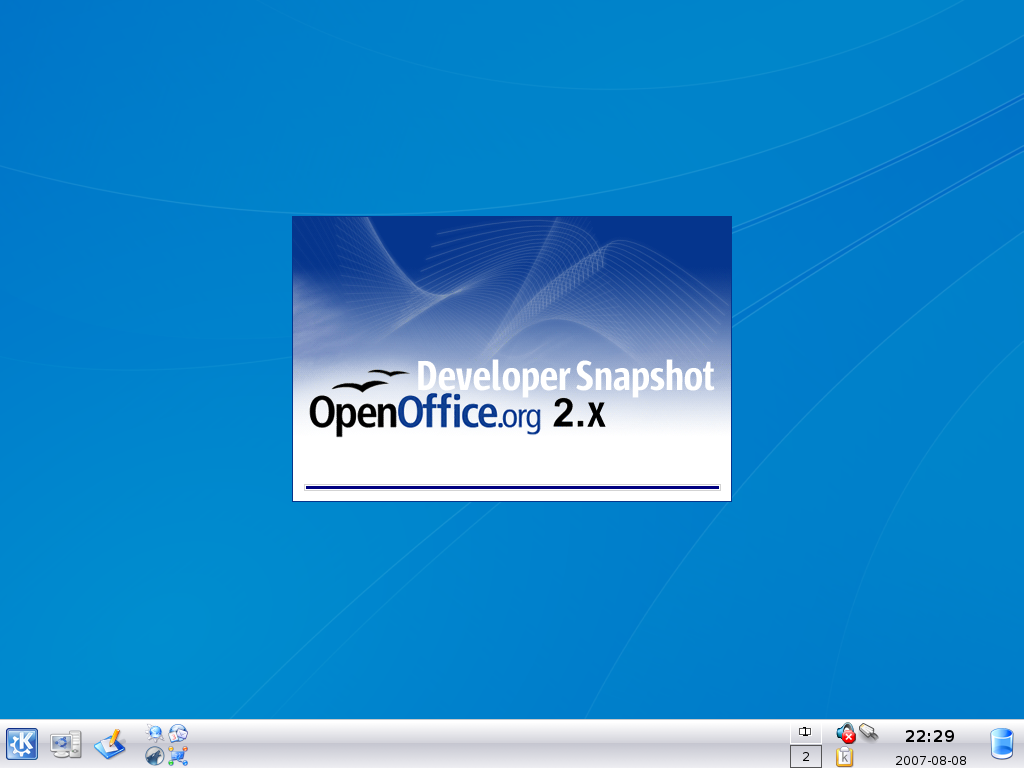 if I have a file on the Desktop, and I cut it and past it on Dolphin, the file isn't moved, but 'copied'!

kmail is behaving strangely. Whenever I check my imap account from some other client, I see emails being duplicated, I keep on deleting the duplicates and they reappear. So, I now use almost all of Kontact, except kmail. This is quite a serious bug. --AChaudhuri

I'm a long-term Linux user and have used Kubuntu since Breezy. I've upgraded from Feisty to Gutsy four days ago and these are some of my findings. Though they are very negative, I think that Gusty is an overall good release.

Upgraded several machines to Kubuntu 7.10 Gutsy. I like the distro but find 2 major annoyances :

Besides that stuff, I have nothing but positive things to say about Kubuntu. Its been my OS of choice now for the past year or so, and though I didnt see too much of a noticeable difference from the last version(im not a programmer or anything) besides the Dolphin addition and my vmware not working, I do love the work you guys are doing and appreciate having an OS as great as Kubuntu. Thanks for all the work -Supreme1012

Not to disrespect the hard work of folks here, but 7.10 is a step backward from 7.04 in my opinion. *First the upgrade problems: I got about two hours into the upgrade and got a core dump in the upgrade app. I don't remember the exact error message, I believe it was related to the install step for X11-common, but it left my machine unable to boot into a graphical environment. *After this, I did a fresh install of Gutsy. Here are my issues with the Gutsy Gibbon release: 1) Dolphin is the default file manager, and is seriously lacking in functionality compared to Konqueror. This weak app is missing what I would consider to be really basic stuff for a file manager, such as a location bar. 2) Virtualization didn't work for me. I couldn't boot my windows image with the version of QEMU present in 7.10, even though it works fine under Feisty. 3) File and directory permissions are really messed up, at least for usb devices. I mounted my Sandisk M230 usb mp3 player (Mass-storage class mode), and got strange permissions problems when trying to copy over songs. Even for folders that I had just put on the device, when I removed it and remounted it, I got permissions issues when trying to delete files. 4) Lack of good Compiz integration. This is supposed to be the killer feature of this release, and it isn't even enabled by default. After turning it on, I can see why - it's not ready for prime-time in KDE. Little glitches like the the "update" icon floating in its own borderless window, instead of being in the dock, for instance. *In the end, after spending a couple of days or so fighting with Gutsy, I ended up wiping the disk and reloading the *almost perfect* Kubuntu 7.04 (Feisty Fawn). I hope many of the problems with 7.10 get fixed before the next Kubuntu release. In any case, I don't think I will ever be so quick to upgrade again - once burned, twice shy.

My installation experience with small RAM workaround and problems with /etc/fstab and kaffeine.

Installed Kubuntu Gutsy from the i386 Desktop install CD (the image was verified).

Language for the installation was set to Finnish (fi_FI.UTF-8) and Adept failed to complete installing the (security) updates after the installation. I had to finish the package updates with "sudo dpkg --configure -a" from console (said "y" when it asked whether "/etc/qt3/qt_plugins_3.3rc" could be overwritten by the version from the updated package, what had modified that during Kubuntu installation???), otherwise the system was as installed from the CD.

Then I needed to set the language to Finnish from the KDE control center too, because most of the UI wasn't Finnish. After adding Gimp I need to add language-pack-gnome-fi too, Gimp translations didn't come automatically.

Then I tried to set kdm to autologin the person for whom I was installing the Kubuntu for, but couldn't because of bug 175909 (regression from a bug closed in 2005). Most of the time with the installation went to debugging & resolving that issue.

There are also some issues with Kmail which I haven't debugged yet, so in general Kubuntu Gutsy seems to be beta quality at best (security updates, initial language selection and basic tasks related to administration (getting rights from user for it) just have to work). I won't be installing this Kubuntu release near my own or anybody else's machine, hopefully Hardy release will have better QA.

Adept & kdebi was very buggy + got a seg fault or so on the live CD when trying to use the live CD to reboot/shutdown, etc.. Many, Many SegFaults in Apps. I still get hte bookmarks perm. error. :/ even after all updates. kdm sucked in this version After remocing adept and installing synaptic, then removing kdebi (or whatever) which would freeze up just like adept and installing the regular gdebi & of cource remocing aRts sound system (esp. after removing this), etc.. fixed many problems I had with this ver. of Kubuntu (my first Kubuntu ver. tho :)_). Also after updating to ver. 3.5.9 from the kde site it fixed a screensaver not working problem I had and also since the screensaver didn't work neither would pdigin set the away status after x min. :(, however again after updating it fixed those issues. Alas also after man. changing kernel versions and a few twesks - all is working well. Yes I removed konqueror as it sucks, dolphin rules

and is NOT sucky in this ver. of kubuntu like others have said.