Ubuntu has various interfaces dealing with power. These include a panel in System Settings (“Battery” for devices seldom plugged in, “Power” otherwise), a battery menu, alerts for low battery, and the ability to suspend or hibernate.

How long a device will run on battery, in hours and minutes, is much more interesting than what percentage charge the battery has left. For example, a 100%-charged battery may last wildly different durations depending on how old the battery is, what OS version is running, and what apps are running.

On a PC, Ubuntu can make a reasonable estimate of time remaining while the PC remains awake. Unfortunately, on phones and tablets, this isn’t practical — because battery drain varies so much when the display is on vs. off, when the phone is in vs. out of range, calls are in progress and so on.

Therefore, Ubuntu should treat devices with and without a SIM card differently when presenting battery charge, as follows.

Wherever it is represented, a chargeable thing should be represented by an outline icon that most closely matches the component or device: a battery, a mouse, or otherwise a generic box.

If it is a battery that is either missing or of unknown charge level, it should use the generic battery icon.

If the thing is fully charged and not discharging, the icon interior should feature a plug emblem (bug 850011).

If it is discharging, or if it is not known whether it is charging or discharging (bug 1470080), the icon interior should be filled from left to right approximately as much as the remaining charge. If it has less than 30 minutes left on a PC, or less than 20% left on a phone or tablet (bug 1410495), the fill should be red rather than monochrome.

Wherever a component’s percentage charge is shown, it should be rounded to zero decimal places and have no trailing space, for example “99%” or “100%”.

The color for a component’s charge level should follow a gradient from bright green (#00ff00) for 100% to bright red (#ff0000) for 0%. (This color should not be used in the indicator, however, as it would be present so much of the time as to be distracting.)

The brief time-remaining string for a component should be:

For example, if your notebook has two internal batteries — one fully charged, and one that will discharge in 22 minutes — and your wireless mouse battery is estimated to discharge in 27 minutes, then the menu title should represent the mouse. Even though the internal battery will lose power first, the mouse is the device that will lose power first.

The contents of the panel varies depending on the hardware and software. 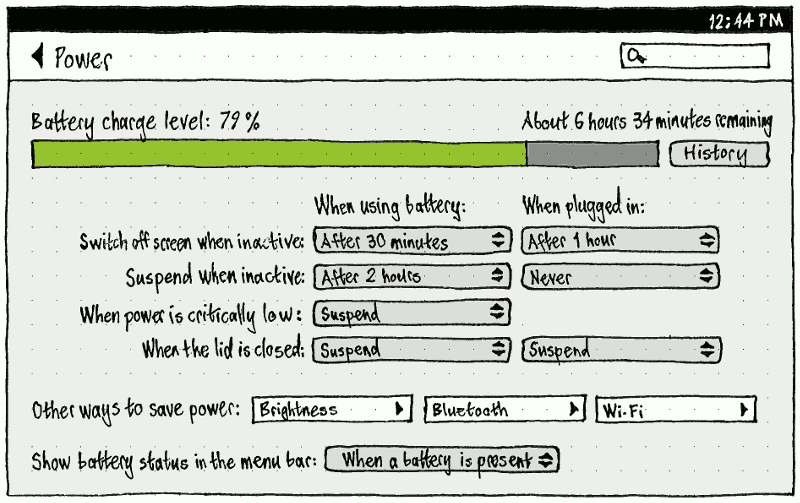 The “Charge level” (for devices without a power jack) or “Battery charge level” (for devices with one) should be shown as a percentage. The “Last full charge” should similarly be displayed to zero decimal places in the most appropriate unit, seconds minutes or hours (bug 1438535): for example, “48 seconds ago”, “1 minute ago”, or “61 hours ago”. When appropriate, the “Last full charge” row should instead read “Charging” or “Fully charged” with no time value.

The charge meter, when shown, and each point on the charge graph, should use the color for that charge level. On the charge graph, charge level while asleep should be shown as a dotted line, from the level just before sleep to the level just after waking. The Y axis should be unlabelled, because its meaning and range is obvious, with major tick marks at 0% 50% and 100%. The X axis should have tick marks for every o’clock that has passed in the past 24 hours, with major tick marks for the most recent o’clock and every six before that, labelled using the current time format but without minutes. For example, if you use AM/PM format and the current time is 4:51 PM, the labelled tick marks should be “10 PM”, “4 AM”, “10 AM”, and (the last tick mark) “4 PM”. In addition, yesterday’s range should be labelled “Yesterday” when there is room, and today’s with “Today”.

The battery indicator exists to indicate how much time you have left when a rechargeable thing (battery, UPS, mouse, iPod, Bluetooth phone, etc) is discharging, and conversely how much longer it will be before everything fully charges. On the PC, the battery menu exists to give you more detailed information, and to let you access power settings.

On the PC, everything that is accessible in the battery menu should also be accessed in the settings panel, because the menu may not be present.

On a phone or tablet, the indicator should always be present, because these devices almost always rely on battery.

Regardless of form factor, the indicator should tell you at a glance what you need to know most: which component will lose power soonest (and optionally when), or otherwise which component will take longest to charge, optionally how long it will take, and optionally its current charge level. More detailed information can be accessed inside the menu itself. On a phone or tablet, the component in question will almost always be the phone or tablet itself, though it may be an external keyboard.

The menu title should begin with the icon of the thing it is representing.

The menu should contain:

(If you are not logged in, and there are no chargeable components, the menu would contain nothing at all. But that does not matter, because in that case the menu should not be present anyway.)

The menu item for each chargeable component should consist of two elements.

If you are logged in, selecting the item for a chargeable component should open the “Device Information” window for that component (bug 1255655). If you are not logged in (at the login screen or standalone installer session), the item should be insensitive.

Unfortunately the Linux kernel does not provide real-world identifiers for multiple batteries in a computer; they have only serial numbers, and labels of the form “BAT0” and “BAT1”. So we cannot show useful distinguishing labels like “Battery (front slot)” in the menu.

This is a summary only; the specifications of individual items are authoritative.

In the guest session and live session, the menu should be identical to the normal session.

In the standalone installer session and at the login screen:

The brightness slider (bug 1289470) should exactly mirror the one in the Brightness settings panel.

“Battery Settings…” should navigate to the System Settings screen.

On the phone/tablet, the secondary text should be of the form “10% remaining”.

Hibernating or powering off automatically

The device should hibernate (PC) or power off (phone/tablet) if both of these things are true:

When a sleeping phone/tablet is connected to or disconnected from power, its display should turn on for the same duration (5~10 seconds) as if a hardware button had been pressed with no further input (bug 1348538).

In addition, when a phone/tablet is connected to power and you are not in Silent Mode, a brief sound should play to confirm that charging is in progress.

Neither of these should happen for a PC, because it is very often powered off completely at the moment when it is connected to power, and doing it only when it was powered on would seem inconsistent.