I, Scott Howard, apply for universe-contributor.

I'm an academic researcher with a PhD in electrical engineering.

I started by setting up a Debian LAMP/samba server for my lab around 2004. I installed Debian on my desktop to learn Linux, but switched when someone told me of this new distro called "Ubuntu." I've been using Ubuntu/Xubuntu since. After the release of Jaunty, I joined the bug squad and eventually bug control, participating in many hugdays as a triager, and I now review bug control applications and mentor a new bug squad member. I adopted the gnome-power-manager package for triaging, and triaged nearly every "new" GPM bug over the course of a month (see the chart below). While triaging the bugs I worked a lot with upstream, and started writing patches to fix bugs. I started writing patches for Ubuntu, and bringing upstream's patches to Ubuntu. Now I'm a triager/developer that can triage, write the patch, test it with PPAs, and then do the merge proposal with bzr on LP. Since GPM is a core package, I joined Ubuntu Science to get some "universe" experience. I now am a member of the MOTU Science team and have done triaging, bug fixing/patching, packaging, merges, syncs, upgrades, FFEs, and an SRU. I have upload permission to GNOME, maintain two packages in Debian, confident with git, bzr, PPAs, package building, new packages

I have upload rights to gnome (gnome-power-manager), just got approved as a Debian Maintainer, and maintain 2 (soon to be 3) packages in Debian. 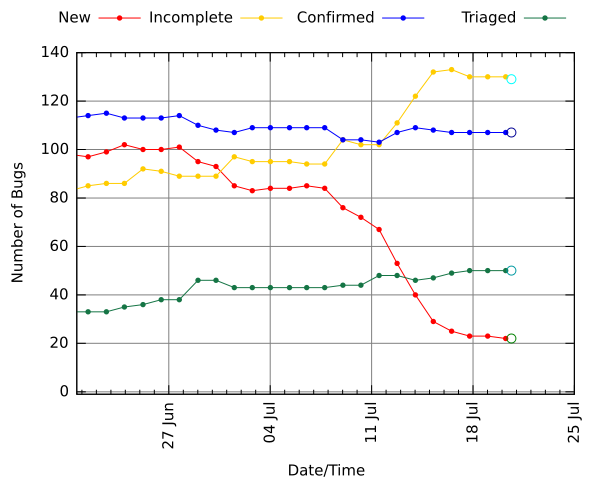 Keep the Ubuntu Science packages working, and work with Debian Science to keep both Debian and Ubuntu's science offerings the best that is available. I'm going to start the Debian new maintainer process.

When working with GPM, I saw the Ubuntu was user rich and developer poor. I felt "alone" triaging, patching, and testing some of the bugs. I found that this could be used as a strength - I learned to use LP to craft high quality bug reports that pin pointed bugs, and even proposed how to fix the exact line in the source code using the help from the users on LP. Frequently the upstream developers were not aware of the bugs and appreciated the precise fixes we could provide from LP

I've only worked with Scott once (see below), but this guy needs to be a MOTU

He knows his stuff and the type of packages he seems to work on a lot could really use the help.

I worked with Scott on Bug 471238, which was a Karmic SRU for Qtiplot. Scott was fast, thorough and very professional. He pushed the issue forward, was polite on IRC, and technical quite proficient for Contributing Developer applicant.

None that I could see.