Create a new web project for hosting searchable, browseable and editable documentation for the APIs that are used in Ubuntu application development.

The API data will be parsed from many different sources, pre-rendered into HTML, and stored along with meta-data about it in the database.

Users will be able to contribute snippets, linked articles and images to expand upon the generated documentation.

These models will be used to define the platform that application developers can target. A platform is the combination of libraries and APIs provided by a given release of a distribution.

This model will represent a reusable reference to a distro (Ubuntu, Kubuntu, Xubuntu, etc)

This model will represent a specific release of a distribution, and will be used to define what libraries and versions of them are available in that release.

This model will be used to group PlatformItems by areas of focus, such as Graphical Interface, Filesystem, Multimedia, etc.

This model is used to define a platform, it links API docs of a specific version to a specific Release

Will represent one of the available programming languages in the system

These models contain the API docs themselves, pre-rendered to HTML by the import process.

This model contains the pre-rendered HTML for an API element

These models contain searchable meta-data about the API elements

This model contains information about a programming language class, it's methods and properties

The frontend will have a number of Django models specific to Ubuntu, making use for the GDN data models.

Will link a tutorial or question on AskUbuntu.com to an api element

An uploaded image showing the visible result of an api element

The web frontend should be built using Django templates, wrapping the pre-rendered HTML for each API element with a standard header, footer and other navigation.

This project should use the community Django theme as much as possible, with site-specific css and javascript being added to the above web frontend code.

Paths will have two parts, the first will contain the Distro, then DistroRelease and ProgrammingLang. After that will come the Namespace and Element name:

Views should contain anchor links to all API elements on the page:

The main page of the site should provide a brief (on paragraph) text explaining the purpose of the site, followed by a list of DistroRelease records. This list will contain only supported releases (those that have not reached their expiration_date) ordered by release_date, with an associated screenshot.

The Distro Release page will list all of the PlatformItem records for the DistroRelease, grouped by PlatformSection. Each item will be presented by the GDN Namespace name, followed by links for each of the languages supported by that Namespace as defined by the LanguageNamespace data models.

Initial PlatformSections for Ubuntu are:

Here we break the library down into sections so the user can more easily browse them. We also provide a list of tutorials of general interest to GTK+ (these could be from the cookbook portion of the site. We may also want to include some general user-added documentation here (e.g. such as an introduction to GTK). A quick reference list of all the classes, enums and top-level functions is displayed on the left-hand side. 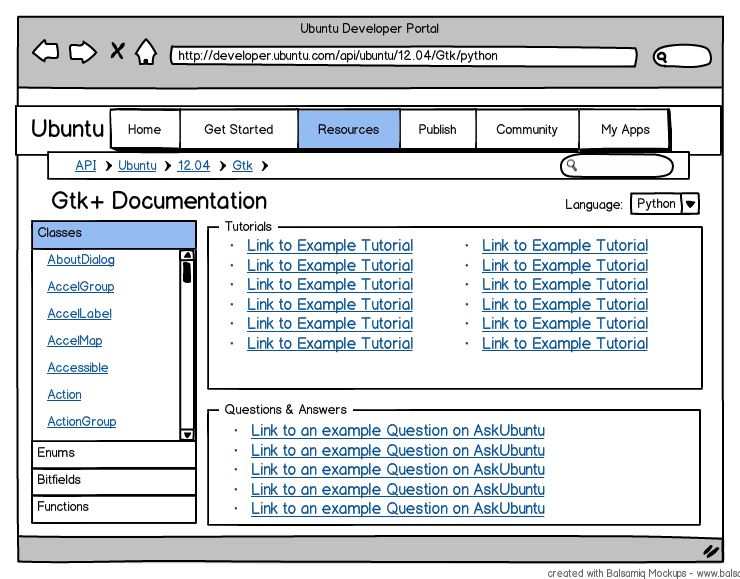 When a user clicks on a class, enum or bitfield we see the information page. This page has a number of features: 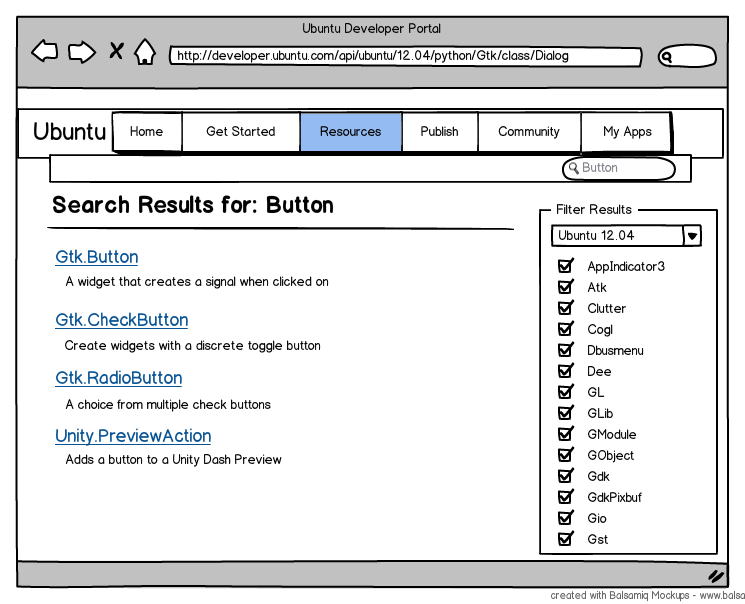 To edit content users will need to be in a particular launchpad group (for example the docs team could be part of the group) and users who have permission will see small edit button next to each field (similar to Launchpad). There inline editing can occur:

The site would support markdown format to make it easy for users to edit and submit content.

Given a Qt library XML file (qdoc DITA output), import its data into the database. If a previous version of the same namespace if specified, forward copy all related records (snippets, tutorials, questions and comments.