In order to make it easy for the user to migrate from a KDE 3 desktop to a KDE 4 desktop, without messing with the configurations, it is necessary to create a Migration Wizard which takes care of this.

The probably best solution to ensure that the wizard is always executed, is to have a kubuntu-startkde wrapper script which first checks whether migration is necessary at all1, to start the wizard as needed and as soon as it finished, to actually execute the startkde script.

In order to properly check which scenario applies, we need to have some special configuration file or a configuration value in an important config (e.g. share/config/kdeglobals). This can represent all 3 states:

If type detection returned state 1, the wizard has to find out whether KDE 3 or KDE 4 is to be started, this can either be done by different wrapper scripts, or by passing a special argument to the wrapper script (after all the wrapper script also needs to know which desktop to start, to invoke it's startkde script later on). Depending on the result of this check we either kick off a S12 for KDE 3 or S2 for a KDE 4 migration.

If type detection returned state 2 migration, the wizard first has to check whether we are actually starting KDE 4:

If type detection returned state 3 we don't have to do anything since .kde3 migration is done and .kde i used for kde4 already -> startkde.

The wizard just moves .kde over to .kde3 and writes a file/value which leads to a state 2 detection.

The wizard copies all files from .kde to .kde3

The wizard copies all updated files from .kde3 to .kde

As soon as the wizard finished successfully, the wrapper script just executes the startkde script.

Another important feature would be to re-import configurations from KDE 3.

Amarok isn't yet available for KDE 4, so one has to use the KDE 3 version. Once the KDE 4 version is out, one might want to import the most current configuration data from KDE 3.

A proposed solution by Riddell is to do this in the postinst script for every KDE 4 package, there is however one issue: some configuration data are fairly big (amarok, kmail) which leads to a very long dpkg lock and high disc usage, same applies to systems with a lot of users. Maybe an own configuration would be reasonable, so users can deactivate all postinst KDE 3 -> KDE 4 configuration updates if they want to.

For this to work properly we need reliable definition sets (i.e. someone has to find out where Amarok stores which data and write a definition file or something similar) as well as create a script to include in all KDE 4 packages' postinst or place the script seperately, to copy $config from .kde3 if it is newer than the one in .kde. 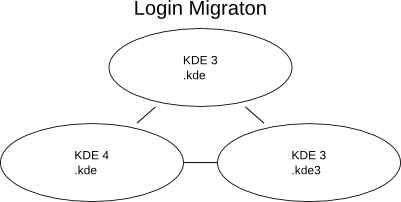 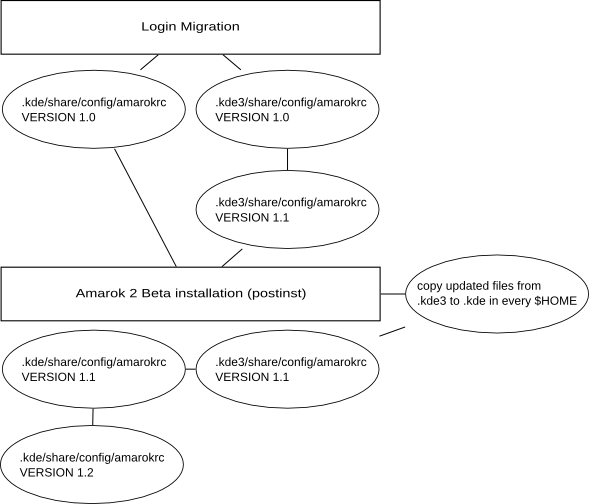