Implementation of fixes for most common usability issues in Ubiquity, and issues raised in Celeste Lyn Paul's usability study.

The Ubuntu installer is now much easier to use and navigate, thanks to a major usability overhaul.

There are a number of issues with the visual design of Ubiquity that continuously crop up in bug reports, complaints, and usability studies.

We will work to mitigate the issues of labels not expanding properly in the interface.

Historically, users have found the UTC/local question to be confusing and the time zone map to be unintuitive. The time zone map will be turned into a automatically scrolling viewport, rather than using a click-and-zoom approach: 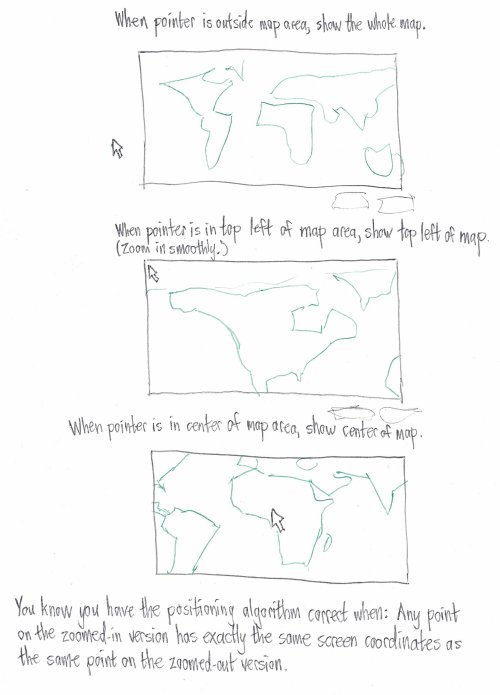 Pygtk widget implementation is available at https://code.launchpad.net/~ubuntu-installer/ubiquity/zoom-map-widget that now provides full-zoom mode (as in the picture above, by setting the full_zoom flag in the code) and partial-zoom mode. A third mode could be provided whereby the zoomed map pans only when the pointer is on the edge of the widget.

The time zone drop down list will be modified to branch out from geographic areas, rather than scroll.

If time permits, and a free data source is found, we will add timezone lines to the map.

allow use of smaller screen size

The installer has never fit well on the screen when the resolution is too low (#38442). Fixing this will involve

oem-config has much the same UI and may benefit from the same reviews.

Historically the code for adding users in migration-assistant has been complicated and prone to error. As the installer does not otherwise support creating multiple users at install time and the common case involves a single user, the multiuser support in Ubiquity's migration-assistant code will be removed, greatly reducing the interface complexity, allowing it to fit in a much smaller space, and killing off the origin of many common migration-assistant bugs. [Done]

This will be tried to see if works reasonably well.

Radio buttons for "suggested option" and "choose your own" will be added to the keyboard selection page to ease the confusion of selecting a keyboard when there are many variants.

The notes appear to have been left in the meeting room. I have the marker board diagrams and will post photos of those soon for added context.