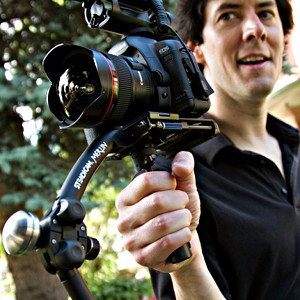 I'm the lead Novacut developer/architect. In bullet points, I am:

Some of my projects in Launchpad:

Ubuntu can easily become the premier platform for professional video production (e.g., movie and TV production). In addition to content-production, as Ubuntu's market share grows, it's becoming an increasingly valuable platform for content-distribution. This is where the rubber meets the road, and if we play our cards right, a huge opportunity to feed additional revenue into both the free-software and free-culture ecosystems.

That's exactly what we want to accomplish with Novacut, and we're approaching the problem from both sides. We aim to:

These are some IRC channels I tend to idle on:

MartinOwens - Jason is devoted to created interesting and useful programs and he's not afraid of getting right into the community and lending a hand in order to move things forwards. I've worked with Jason at UDS and online on various projects and can say that this is one hard working Ubuntu and free software dedicated individual who should be an Ubuntu member.

Jason is a committed and devoted hacker who has set a benchmark of how software development has to be done. For every feature he starts implementing he creates a bug on the launchpad and provides necessary guidance of what needs to be done if someoen wants to work using it. He has a very clear vision and is a ardent supporter of bazaar model of development. He has taught me Debian packaging and I would be forever grateful to him for giving me the first packaging class personally over IRC. I am glad that we have people like Jason in our community. manishsinha 2011-03-07 19:49:17

StuartLangridge -- Jason's a smart guy. I've had a number of interesting discussions with him about distributed projects and Novacut, and I'm confident that he's committed to not only his own project (Novacut) but also making that project be a first class Ubuntu citizen. He and I have discussed desktopcouch in detail, and he's provided both useful feedback and patches to the project to make it better, and the work he's doing to bring distributed video editing to Ubuntu is, in my opinion, a valuable addition to the project. I have no hesitation in supporting his application for Ubuntu membership.