To make it easier for people to choose the languages Ubuntu uses on their computer, the current “Language Support” window should be split in two. The primary window should let you choose the language used while you are logged in, and the language used during startup and login. The selection of which languages are actually installed should be relegated to a secondary dialog. Several other wording and behavior changes will also make the interface more learnable and more efficient.

The current “Language Support” window does not let you do the thing you most likely want to do with the only Ubuntu menu item labelled “Language”: to change the language Ubuntu uses while you are logged in. This setting is available at the login screen, during the few seconds in which you are entering your login details. But it’s not available at the point where you’re most likely to realize you want it, i.e. when you’re logged in and looking at an inhospitable language.

The current window does let you choose a “Default language for new user accounts and the login screen”, which likely causes frustration when people choose a language only to have the setting “stop working” as soon as they’ve logged in. We should provide both these settings, and make a clear distinction between them.

There are several other problems with the current interface: 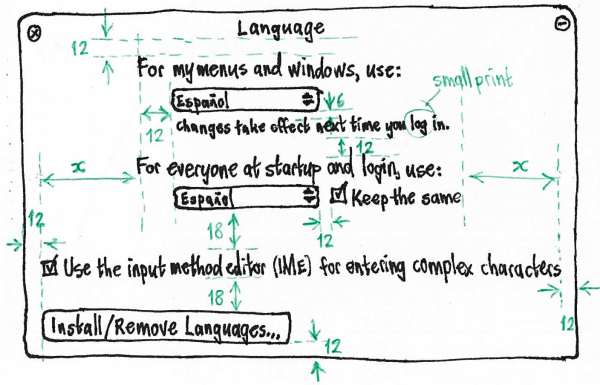 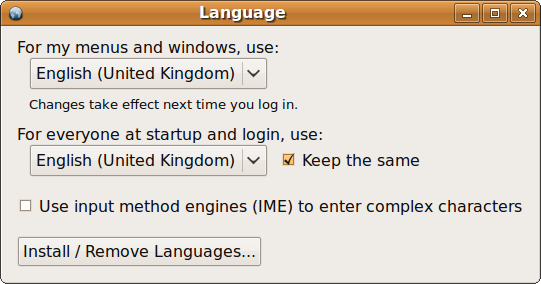 The main Language settings window should let you see and choose the language being used for your own session, to see the language for the startup and login screens, and — if you are an administrator — change that language too. (The startup+login language should also be used as the default for new user accounts, but this does not need to be advertised in the window.)

To help people who are trying to change the computer from a language they don’t understand to one they do, both language menus should present every language in its own language and script, regardless of the language of the current session. For example, “English”, “Español”, “日本語”.

If you are not an administrator, the “For everyone at startup and login, use:” menu and its label should be disabled, and the “Keep the same” checkbox should be both disabled and unchecked. However, the disabled menu should still show the correct language, to explain why the login screen is a different language from the rest of your session.

If you check the “Keep the same” checkbox, the “For everyone at startup and login, use” language should change to match the “For my menus and windows, use” language. Whenever the checkbox is checked, any change to either language menu should automatically change the other menu to match.

If you change the “For everyone at startup and login, use” setting (either directly, or via the other menu or the checkbox) while you are not authenticated, an alert should appear prompting you to authenticate. If you authenticate successfully, the setting change should be made instantly. If you cancel the authentication, the “Keep the same” checkbox should become unchecked, and the language menu should return to its previous setting.

The “Install/Remove Languages…” button should open a PolicyKit alert prompting you to authenticate (if you have not already), and if you have authenticated successfully, then open the modal “Installed Languages” dialog. 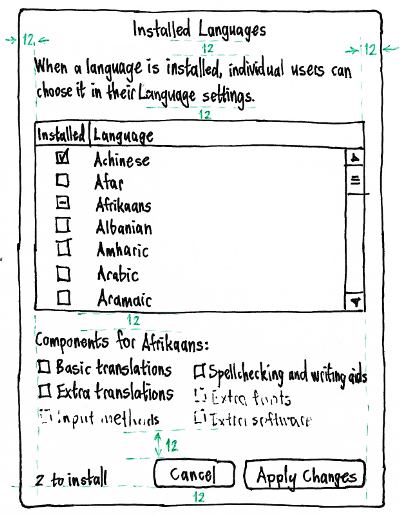 The checkbox labels should use sentence case, e.g. “Extra fonts”, not “Extra Fonts”.

The label for the checkbox group should reflect the language currently selected in the list, e.g. “Components:”.

The text at the bottom left should show how many languages will be installed and removed if the changes you have selected are applied. Examples:

The new language management dialog will be deferred to Jaunty+1. 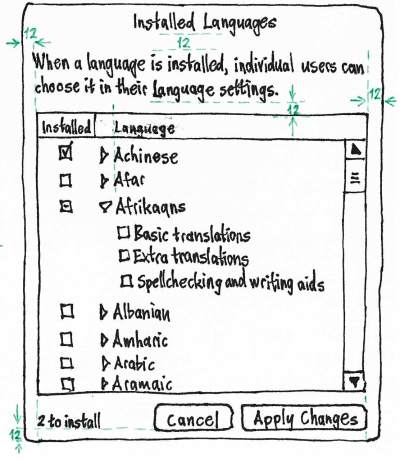 The expanded section for each language should show checkboxes for only the components available for that language. (That is, it should not contain any disabled checkboxes.) The checkbox labels should use sentence case, e.g. “Additional fonts”, not “Additional Fonts”.

mvo: the current code does not use policykit/dbus, there is a lp:~mvo/language-selector/dbus branch with some support. its incomplete, there is a dbus based package installer missing (packagekit)