At the April 2009 kernel team sprint in Lexington, it was decided that the Canonical Kernel Team will now hold bug days twice a month. This is a day for community members and developers to come together and work on a specific set of bugs. Working together allows us to share knowledge and give some much needed assistance to the Ubuntu Developers. It's a great opportunity to give back and get involved! The goal is to start a consolidated effort to address the number of open kernel bugs. Please refer to the associated bug day wiki's, linked under each section, for more detailed information regarding each bug day.

Please join us Tuesday in the #ubuntu-kernel IRC channel on FreeNode as we tackle this list of bugs together. 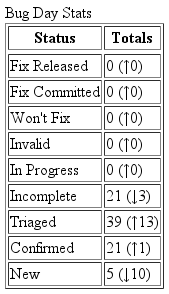 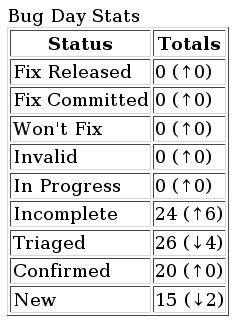 Incomplete with a response