This page is an adaptation of the Lenovo3000N100_0768 one, with support of the different nvidia and sound behavior. I will follow updating to fullfill ubuntu support on this great piece of hardware. RafaelPinilla 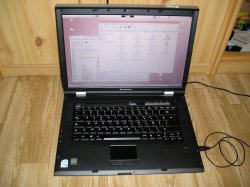 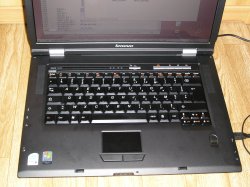 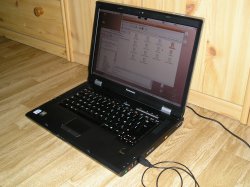 This laptop is quite well supported by Linux. Sound works perfectly in Feisty.

Steps to install Edgy on this laptop:

Don't need to pass any extra parameter to kernel for installation. All goes fine.

Nvidia proprietary driver works out of the box after installation.

Daniel Stone has made Edgy packages for the intel modesetting video driver and Xrandr 1.2. Thanks to this new driver, we can get rid of 915resolution, correct modes will be automatically detected. Also, Xrandr 1.2 allows you to manage easily your outputs at run time (no need to reconfigure Xorg.conf and restart Xorg). Xrandr will let you handle three outputs on this laptop: LVDS (the laptop's screen), VGA (the VGA output) and TV (the TV-Out). See xrandr's manpage for how to use it.

This is cool stuff, but still experimental, they may blow up your machine, use at your own risk!

The repository is here: (add this line to /etc/apt/sources.list)

You'll have to upgrade those packages:

And install this one:

If you want to go back to edgy's original driver, just uninstall the xserver-xorg-video-intel package. Xrandr will not work without it, so you'll have to reinstall edgy's packages (mesa, xrandr, etc.) if you want your Xrandr 1.1 to go back.

By default, the system controls itself the CPU frequencies (it gives more if needed), which is perfect for most people. If you want to control manually the CPU frequencies and governors with the applet, you must execute it with superuser privileges. In order to do this, run this command:

Sleep works fine in feisty, even with NetworkManager, which causes sleep to fail. Hibernate works fine too. 3D desktop seems to bug the process.

The snd-hda-intel driver is used for sound. It works out of the box with Edgy.

Internal speakers do not mute when plugging the headphones. A work-around consisted of unchecking the “External Amplifier” box in the sound panel applet, but it caused severe sound degradation. Moreover, it is not the right way to mute the speakers, it just disable an amplifier which causes the loss of quality.

I hacked a bit alsa-driver-1.0.14rc1 and wrote a little patch, not perfect but the result is still better than without. Here is how to install alsa 1.0.14rc1 with the patch:

Then reboot. You may have to unmute your sound card after the first reboot.

There is one issue still remaining: when Master volume if muted in sound controls and when you unplug the headphones jack, then it will unmute the speakers too (where it shouldn't). You'll have to remute them manually... For those who are interested in tracking it down, see the ad1986a_laptop_eapd_automute() function given by the patch.

Here is an alternate way of applying the patch to alsa without modifying too much the ubuntu installation :

and only snd-hda-intel was replaced with a working version (note that i dont think that using rc2 or rc1 change something but since there was some fix for other problems in rc2, i chosen this one

There are four Fn keys which aren't working out of the box, but user can set them with the setkeycodes command. There is also a special “Lenovo Care” button, which can be set via this command. However, I don't know yet how to affect the Fn keys to the task there should do (sleep, toggle WLAN, switch display and hibernate).

Here is an example of how to activate the Lenovo Care button (scancode = e034):

It will attach the keycode “129” to it, then you can configure it in Gnome keybinding properties (if you use Gnome).

In order to get the keys recognized after each boot, you must put these lines in an init script (in /etc/init.d/):

The fingerprint reader does not work out of the box. I don't know if it will be supported one day, anyway there is a wiki page about FingerprintAuthentication.

Here is a program using the fingerprint reader:

I have a segfault for the biologin program, but the basic driver works! Give a try to usbrunner. You can find it in both AES packages on this page. It will create a finger.xpm picture file in the same directory where the program is.

There is people at debian working on it too : http://wiki.debian.org/FingerForce

There is an integrated Webcam in this laptop. lsusb tells me that it's a Microdia (0c45:624f), which should use a SN9C201 driver. Currently it seems that there is no driver which supports it.

It seems that there are three or four devices for the card reader:

The card reader can take xD-Picture, MS, MS PRO, MMC, SD and SDIO cards. The xD-Picture card is not supported (and will probably not be supported for some time, since it's a proprietary format). Other cards haven't been tested.

Judging from the Lenovo website, there seems to be an enormous amount of different models even within the N100 0768 subtype, and these cover a wide range of hardware configurations. While the bulk of this page covers the B9G model, I can report the following differences in using the A53 model with Ubuntu 6.10 and kernel 2.6.17-11-generic: