What is LoCo Lint?

LoCo Lint is a tool to help the members, administrators, and the LoCo Council better use Launchpad. LoCo Lint allows structured input, and simple questions. The rest will be done by the script.

Installing the tool should be easy. LoCo Lint is not in the Ubuntu repositories, so you will have to add a PPA to install it. These commands should take care of it:

LoCo Lint is now installed on your machine.

The first time you run LoCo Lint, you will need to set up the Application. Run the command

You should now see a screen that looks a bit like: 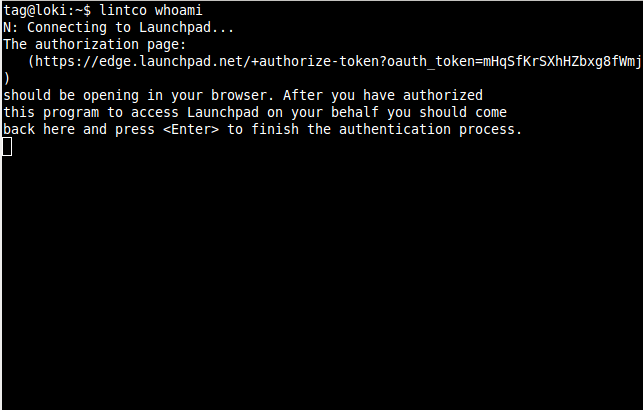 You will now need to setup lintco's access to your Launchpad profile. Lintco will now open up your favorite web browser, in an effort to set up the access levels. The page loaded should look a bit like:

You will want to click on "Change Anything". We will need to deal with private bug reports, so we need this access. Don't worry, the code is nice. Please review it for any security issues you have. Click on the button ( as shown below )

Good, now after you click it, you will move on the the last page, which looks a bit like:

Head on back to the terminal, and hit enter. You're now set up and ready to use lintco.

This section will cover the basic usage of lintco -- LoCo Lint's main tool.

Reporting Issues with a LoCo Team

LoCo Lint is able to file issues ( with your permission ) for the LoCo Council to respond to. All the issues filed will be private! We'd rather like these reports to be honest, and to the point.

The advantage with using Launchpad over IRC or Email is that you will be able to watch the progress on the issue, rather then just sending in a complaint and hearing back later.

To file an issue with the council, just run:

The first section of output will be working to figure out what LoCo teams you're on. Since there is a small issue with Launchpad's API ( and not exposing bits of it ) this may take a while, depending on how many teams you're on. Thanks, wgrant for helping me work through this, though.

The output should be similar to mine, but not with my name

At this point, you may enter a number between 0 and the last element. If you are not on any teams, it will default to lp:~locoteams.

Let's say I would like to report an issue with Ubuntu Ohio. I then type 3, and hit enter.

I may now enter the "body" of the issue that I would like to raise. Here's an example:

After the last line ( where there is a period on it's own line ), the app will take the text, and send it in as a ( private ) bug report against the loco council.

Now that We've got the Input, LoCo lint will file the bug. You should first see output that looks like:

Then, after it's done, you should see

Check out the demo bug Here.

In addition, report-issue is able to accept up to two arguments, the first for the team to file against ( this saves time, looking up your loco teams takes a while ).

This will still ask for the report via stdin as usual. If you have a prepared report in text format, you may also give it the file path, such as:

The more arguments you add, the faster it is to send a report. Please use this with care, and only send issues that need to be reported.

Finding out who is the contact of a team

LoCo Lint is able to go out and find who owns a given team. It will either return the owner of the team ( if there is a single owner ), or the top-level members of the group that owns the LoCo. This should work for most use cases.

Let's run it a few times and see what we get!

To kick off a lookup against the loco team "ubuntu-alaska", run the command:

The output should look like this ( I've removed Jim's email, when you actually run it, it works better

Sweet. You'll notice it also made a note that the team name is formatted wrong. This is more for the Administrators of the team, and the LoCo Council.

Checking to see if a LoCo Name is Well Formatted

There is a bit of locolint that checks LoCo names to see if they are standard ( and normalized ) or non-standard. There are a lot of non-standard teams, but hopefully this will make it easier for people to check if their LoCo's name is right or wrong.

Let's run them against LoCo Lint to check!

Looks good! Be sure to use this to test that the LoCo team you're creating is actually in the correct format!