The media viewer application for mobile devices. This is not the spec for the underlying engine (e.g. gstreamer, helix, etc). The media player for UME will have a finger-navigable UI capable of viewing photos, playing music and videos, and using either the gstreamer or helix media engines with a common interface to them. The UI will follow the recommendations in the UI Style Guide

Screenshots at the bottom

There are some existing media applications but none seem to cover all of the features needed and be tailored for a MID, so a new UI is being written. The goal is to simplify the media management on the MID and provide a single place for viewing and listening to media.

Gstreamer and Helix media engines will be supported with dynamic discovery of the content types supported by whichever engine is present at runtime. Helix support is being included primarily for DRM solutions.

1. Photos. A user opens the media viewer and clicks on the "Photos" icon (currently a camera). The thumbnail view of all the photos in the top-level folder are displayed. The user can scroll through the thumbnails and touch one to see a bigger version. The user can click the "full screen" button to see the picture full screen.

2. Photo Slideshow. A user wants to create and view a slideshow of their pictures. By default, if the user is in a folder and clicks "Play" button, the pictures currently shown in the thumbnail view will start showing full screen as a slideshow starting with the one selected or the first one in the folder if none are selected. The user can create new slide shows by selecting the "New slideshow" option on the left (not currently implemented). User can assign one or more songs to play during the slideshow and also set the length of time between pictures.

3. Video. A user opens media viewer and touches the "Video" icon (currently a director's scene tool). All of the videos in the top-level folder are displayed as thumbnails with a frame from the movie, or user-defined jpg image showing. User scrolls through thumbnails and picks desired video. User touches video and it begins to play in the area of the thumbnails. User can use the buttons at the bottom to control the play, pause, rwd, fwd. User can also click "Full Screen" to show the video playing fullscreen.

4. Music. A user opens media viewer and touches the "Music" icon (currently a treble clef and song notes icon). All music is displayed in an alphabeticallhy-organized list. User can change the way that music is viewed as list or albums. User can scroll through list and select the song they want. User touches the icon and the song starts to play. User can pause,play,fw,rwd the music using the buttons at the bottom of the screen. (Eventually visualizations could play when music plays).

4b. Music viewed as albums (TBD). User can select to view the music as albums. The thumbnail view to the right then shows albums in a row at the bottom and the list of songs in each album above in a list. User can touch albums and see songs, scroll through albums, etc. Albums may eventually be scrolled with fancy 3D effects.

5. Music Playlist (TBD). User can create a playlist of their favorite songs. User clicks "new playlist" button when in Music mode and adds songs to the playlist (not yet impl).

6. Internet Radio 6a. (manual) User clicks "Open URL" button at the bottom when in Music mode and can type in a URL. The user clicks "OK" and the media player connects to that URL attempts to play the streaming media assuming that codec support exists for it. 6b. (from browser). See #7.

7. Player content from web. User browses to content on a website using the web browser. User clicks the MP3, non-flash video, or streaming audio or video link. Media Viewer is launched and the media content is played by the Media Viewer. If user wants to continue browsing (while music plays) the user can toggle back over to the Web Browser and continue browsing without closing Media Viewer.

The entire scope of media management is large, from the first time a user obtains some content to consuming it on the device. The following section describes the full spectrum with the ones outside the scope of this application shown in red. Additional functionality may be added as time and resources permit.

The GUI is drawn by Glade Interface Designer. The media viewer and gstreamer D-Bus engine are written in python, so many python binding libraries are used in media player project, such as gtk, dbus, pygst, gobject, optparse, etc. A serial uniform of D-Bus interface has been defined, and all the media engines should follow this definition for their D-Bus interface. 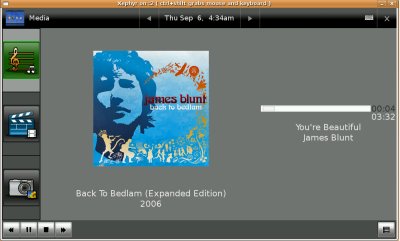 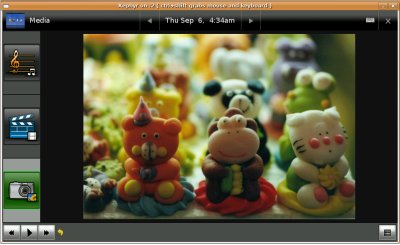 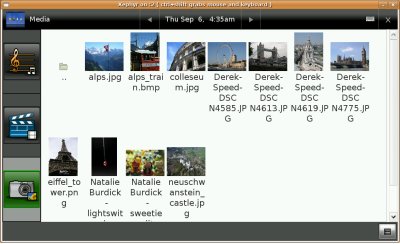 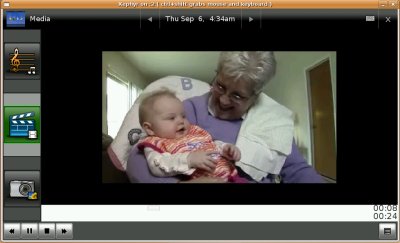