Some mobile devices and kiosk systems will be touch-screen operated with no physical keyboard. These need an on-screen keyboard that works well on the small form factor.

onBoard is lightweight, flexible and uses Cairo for fast and flexible rendering. Several keyboard layouts should be provided for different devices and preferences. OnBoard supports layered keyboard layouts and transparency. The following mock-ups are examples of what can be done with the onBoard code, not direct suggestions for final layouts.

As boring and inefficient as it is, Qwerty is something people will expect. To reduce the space requirements numbers and symbols should be moved to a separate layer. Qwerty keyboards on small devices are usually best used with the stylus as the keys tend to be small.

A keyboard that looks and works like a mobile phone keypad takes up much less space but is also less efficient in use. As on a mobile phone, there are several letters on each key. Press a key several times in a row or for a certain interval to get the second and third letters. The advantage is many people are already highly skilled at this form of text input.

This 5x7 key keypad contains all the letters in a typical alphabet plus some symbols and modifier keys. As with Qwerty this keypad will likely require use of the stylus. 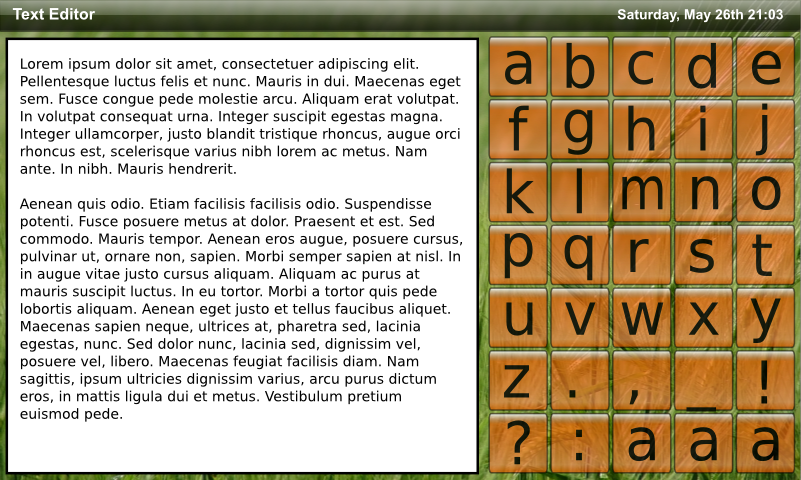 This 4x5 keypad only has the 20 most commonly used letters of a given language (in this case English; source). The remaining 6 letters combined are only needed once every 5 keystrokes. These can be found on the 'sym' layer along with numbers and punctuation. Combinations of sym and shift yields 4 layers with 80 characters (of which 52+ are lower and upper case alphabet). The advantage of this keyboard is that it is small but can still be operated efficiently with the thumb on one hand. 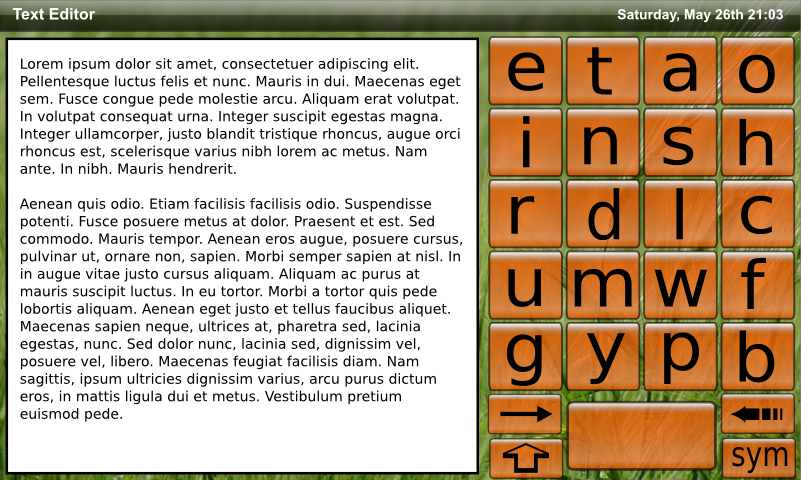 For larger passages of text, input efficiency is important. The full-screen keyboard can be used with both thumbs. The keys 8x4 keys are big and easy to hit, while the symbol layers are needed less often than in smaller layouts. The keyboard would sit on top of the editor application and thereby grab the screen input. A button is provided to quickly hide the keyboard. 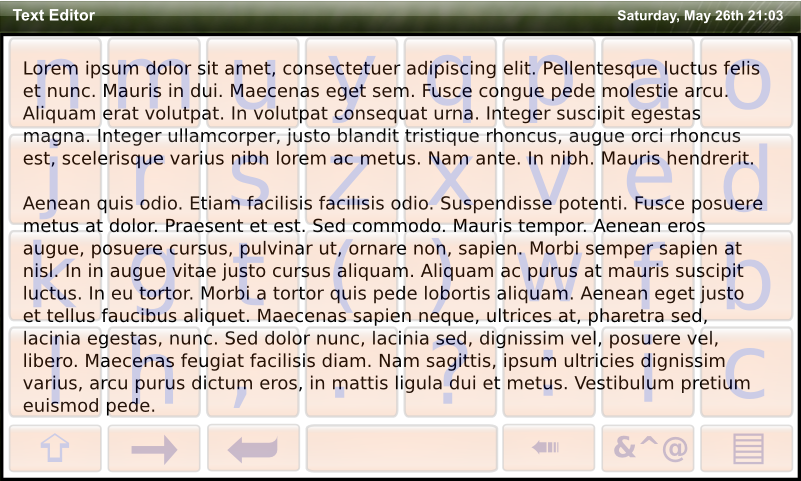 Alphabets with over 50 base characters will require different layout concepts. Multiple modifier keys can be used in combination to give a large number of characters with few keystrokes.

BenjaminPineau. What about Asians input methods (SCIM, anthy & co) ? Will CJK people have a way to input in their language ? This plan doesn't appear to provision such a need.