This functional specification proposes the addition of PPM package into the UME apt repository to solve the Mobile-Internet-Device specific power policy needs.

By adding the ppm implementation, a new mechanism for defining device power profiles will be added to the UME technology pool. For the most part the operations of the PPM will be seen by the end user, but eventually new control panel applets and/or status bar indicators could provide additional controls and/or information about the device power state.

A classic example would be a control panel applet that would provide a UI for placing the device into "Airplane Mode", which would trigger the device to turn off all radios (per federal air regulations) and also enable various low level power saving settings to enable the end-user to use their device for as long as possible.

What is needed is a flexible power policy manager that allows users to select multiple policies, and easily modify those policies to fit their system. The system should leverage existing system power management capabilities, such as Advanced Configuration and Power Interface (ACPI). It should also allow users to write their own power management code for new hardware. Most importantly, it should be a system-wide policy manager that focuses on more than just the CPU frequency.

The Framework The PPM breaks down power policy management by using plug-ins, layers, and modes. 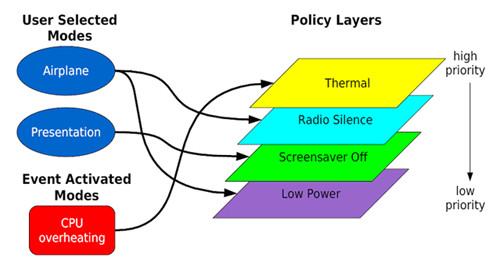 Example layer 2 A second layer, dealing with thermal issues, might:

Which layer takes precedence? The thermal policy layer would have the highest priority, to make sure that the system doesn't overheat. 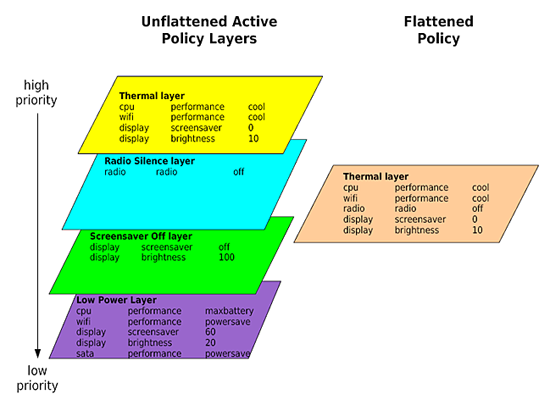 Code example A layer file would look something like this (first release is simple text description):

The source tree for the ppm is available in a public git tree via: http://www.lesswatts.org/repos/projects/ppm.git/

The implementation is split into:

The PPM package does not present a UI, but as soon as the PPM is available in UME then a moblin-applets control panel applet will be added that allows the user to set airplane mode.

This is all new code.

N/A since this is all new code.

A functional spec for the PPM is hosted on the project home page: http://www.lesswatts.org/projects/power-policy/


Testing will not explicitly cover individual device policies, but device specific policy files will be created and exercised for a handful of devices in order to meet the functional testing goals stated above.


NOTE: It is the device vendor / solution creator that will need to craft device specific policy and potentially PPM plug-ins. Since the PPM is general purpose, it is impossible to test for the infinite number of devices that might hit the market.

A standard mechanism for measuring system power utilization needs to be adopted before an optimal power policy can be created. The lesswatts project is working towards this goal.