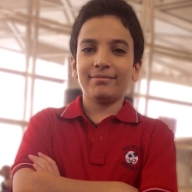 For updated information about me visit: http://about.me/mohameedalaa

I want to learn more in programming, learn bug fixing and applying patches, also I hope to be an ubuntu developer.

I'm using Linux since I was 7 years old, as well as I have a big knowledge in linux.

I am an active member of my native loco team (ubuntu-eg) and ubuntu-sa team.

Translated some projects to Arabic. for example : ADeskBar

Active Arabic Translator. you can see a list of all my translations here

I advocate Open-Source and Ubuntu whenever possible.

I help users on ubuntu-eg community.

I stay for long durations on the ubuntu-eg, ubuntu-sa IRC channels and I support users within it.

I support users on ubuntu-eg Facebook group and I help fix their problems.

I spread the knowledge of open source in my friends and my family.

I publish ubuntu live CDs and ISOs for my friends whenever possible.

I'm the maintainer and developer of Indicator Prayer Times a prayer times and hijri date indicator applet for unity .

congrats for my team :)

Learn how to Fix bugs and apply patches.

- Mohammed is one of the most active members in our social media outlets as well as the support squad. He is a very active and hardworking member of the loco, not to mention he is our youngest member. We are definitely proud to have him in the loco. Mohammed Gamal

- The first time I knew that Mohamed was only 13 years old I was really astonished, because of the high activity and good support he provided especially on our facebook support group. He is always engaged in conversations, learning, supporting others and actually started doing some development on his own. I am definitely proud to know him and would recommend him to be an Ubuntu member. Ahmed Toulan

- Mohammed is highly active with Egypt LoCo through giving support and participating in online events and enthusiastically evangelizes the community. Though he is young, he looks to be a future developer and he showed a great ability to help others inside Ubuntu-EG community, whether through giving support, helping others to migrate and spreading the word. When it comes to the geeky stuff, he is like a sponge, always trying to learn more and get more involved. He currently maintains 2 great apps, Mosally and Indicator-Prayer-Times. He'd be a great addition as Ubuntu Member. --ashams