OneConf is a mechanism for recording software information in Ubuntu One, and synchronizing with other computers as needed. In Maverick, the list of installed software is stored. This may eventually expand to include some application settings and application state. Other tools like Stipple can provide more advanced settings/control.

This will enable to solve several scenarios to allow a user to synchronize the list and the settings with other Ubuntu systems as needed:

(Out of scope for maverick: Scenario E.

An updated design for the Ubuntu Software Center 5.0 layout is now in the USC specification.

In Ubuntu Software Center’s “File” menu should be a section with “Save Inventory…” and “Inventory on Ubuntu One…” items.

“Save Inventory…” should open a “Save Inventory” save dialog. A locally-saved inventory should include the package name, repository (only if non-official?), and package version (only if forced?) of every package installed on this computer. 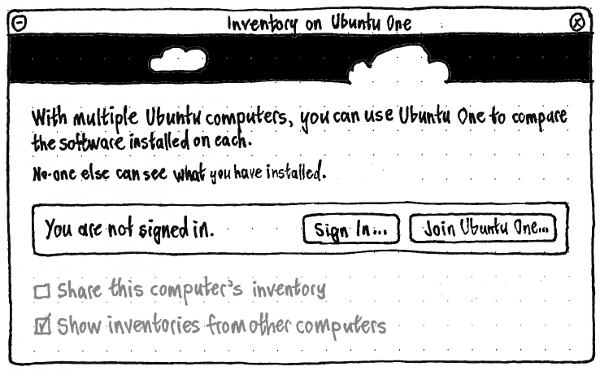 The window should have primary text: “With multiple Ubuntu computers, you can use Ubuntu One to compare the software installed on each.” And secondary text: “No-one else can see what you have installed.”

Status text should be displayed at the trailing end of the window, opposite the two checkboxes. The status text should use the secondary font size, and its baseline should line up with the baseline of the checkbox label (regardless of whether a spinner is present).

For “Share this computer’s inventory”, the status text should be:

For “Show inventories from other computers”, the status text should be: 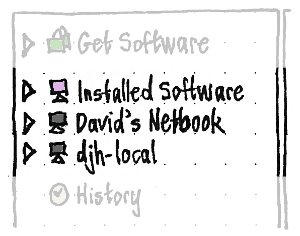 In the navigation pane, the Installed Software group should begin with one item for the computer you’re using. If “Show inventories from other computers” is checked, the group should also have one item for each of the other computers that are sharing their inventory on your Ubuntu One account. For each computer, the icon should represent that computer as much as possible, including a miniature of the background picture currently set on it. The label for the current computer should be “Installed Software”, while the label for the other computers should be their hostnames. Is there a better label we could use? 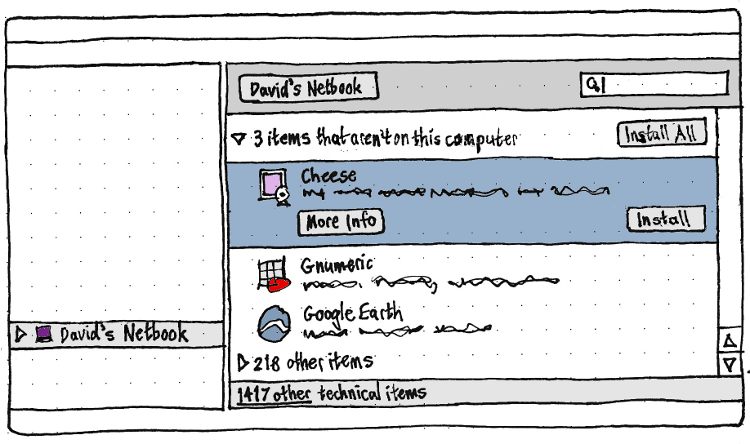 When another computer is selected in the navigation pane:

Implementation: Being worked on by Didier Roche.

Future work for this feature:

Some testing available at: https://wiki.ubuntu.com/OneConf/Testing

Storage is made into couchdb, which gives for free the ubuntu one synchronization.

A dbus service enables to ask for the previous lists, and to update them in desktopcouch. Another call will give the list of installed applications/codecs only.

We will store all package names in desktopcouch with a marker for automatic installed packages and one for application not in default.

Indeed, when showing the list to the user, we only want to get the list of applications the user actually SELECTED to install. We don't want to show packages automatically provided by the default Ubuntu install or dependencies of the packages that the user selects for installation. This way the user can restore his applications on a newer version of Ubuntu without getting dependencies that are possibly no longer needed. Furthermore, the ubuntu-desktop and ubuntu-netbook case on two computers (scenario B.) is addressed.

The algorithm in "Annexe: algorithm for detecting list of installed package" tries to tackle this issue by a stupid heuristic.

We also can add a marker to associate with the PPA list from which the app comes from.

The design will be created by mpt.

Some random ideas was: http://people.canonical.com/~didrocks/oneconf/sc.png

This should be optional and only if network connection is available.

The user should be free to install some or all of the applications from his list of saved applications. When appropriate, we can simply present the user with a list and he can check the packages he wants to install. This allows the user to opt out of reinstalling applications he are no longer interested in.

NOTE: This should be optional. Default is « install all »

Design will be provided by Michael Forrest

Missing packages from the heuristic (to add to whitelist)

Appendix: An algorithm for detecting a list of installed packages

This script detect CLI and graphical apps, for apps not installed by default. It adds some whitelist as well for popular codec and things people usually install which aren't applications.

It can be interested to set the state of some applications dynamically so that switching from an app to the other is possible.

Following a conversation in empathy can be complicated, but we can for tabs for instance store/follow open tabs in chromium/firefox.

Others ideas welcome, but state storing will be complicated to achieve. We should at least for maverick make a short list. 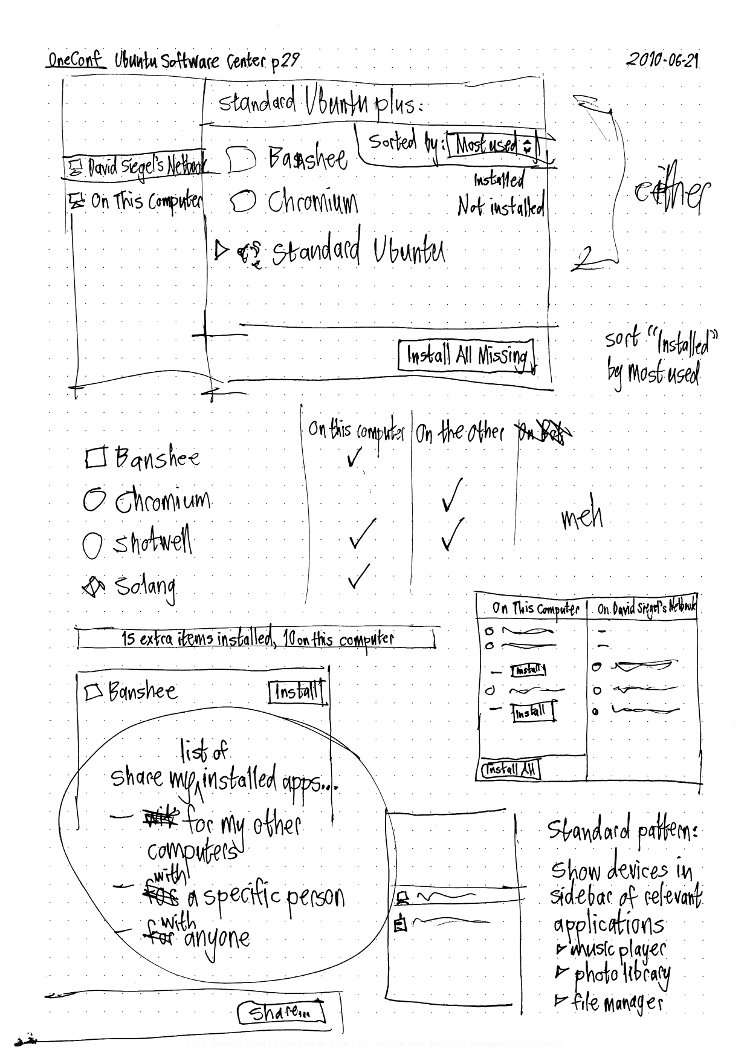 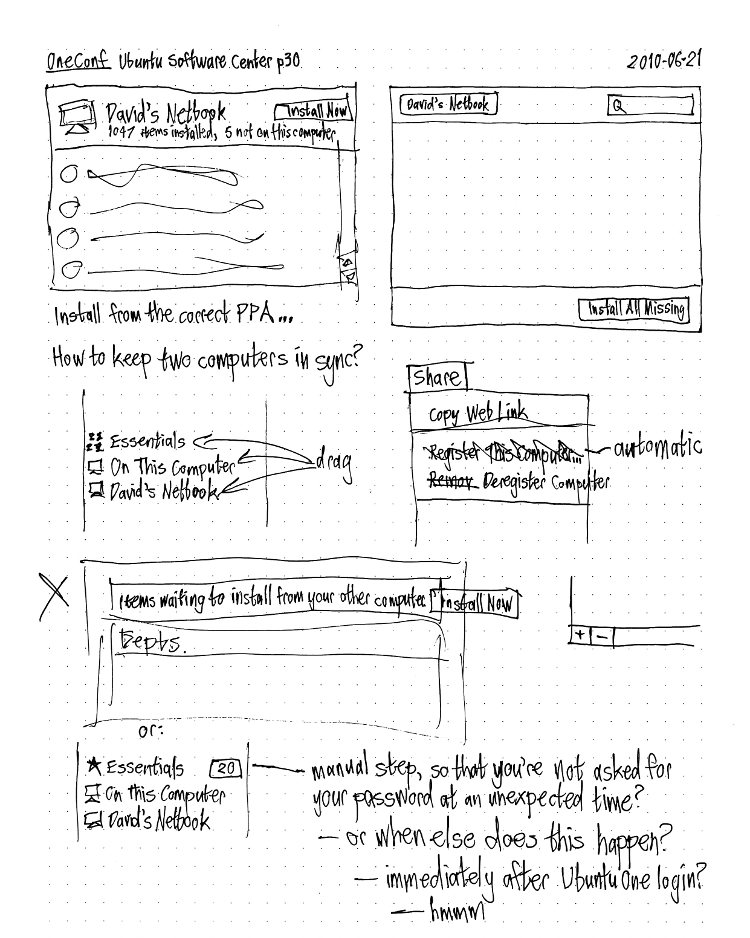 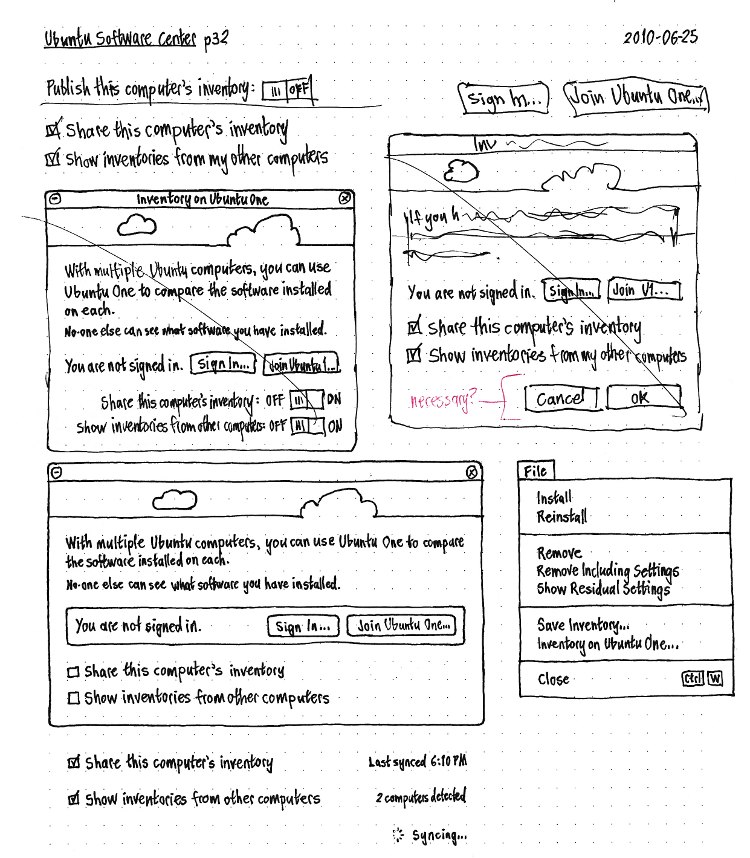