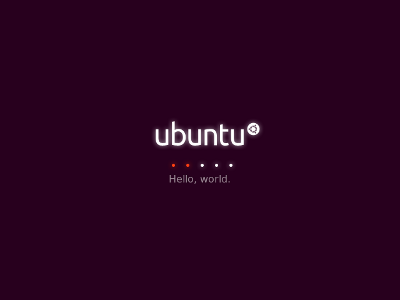 Plymouth is the application which provides the graphical "splash" screen when booting and shutting down an Ubuntu system.

Note that on Ubuntu, Plymouth is considered to be the "owner" of the console device (/dev/console) so no application should attempt to modify terminal attributes for this device at boot or shutdown.

plymouthd runs in one of four modes which are set by specifing the appropriate command-line option:

This allows Plymouth to display potentially different content based on whether the system is starting or stopping.

The plymouthd daemon attempts to read the following files at startup (the first file it finds takes precedence over any other):

This tells plymouthd to use the "script" splash plugin. This plugin allows the graphical splash experience to be scripted using Plymouths own scripting language (hence the name).

Checking Plymouth Can Run in the Initramfs

If this works, to exit the splash screen you'll have to type the following "blind" (and note that backspace won't work, but CONTROL-c will):

To shutdown your system:

Note that "shutdown -h now or "halt" cannot be used since Upstart is not running in this scenario.

If this works, to exit the splash screen you'll have to type the following "blind" (and not that backspace won't work, but CONTROL-c will):

To shutdown your system:

Note that "shutdown -h now or "halt" cannot be used since Upstart is not running in this scenario.

You can experiment with Plymouth after your system has booted. To start the Plymouth daemon:

Plymouth is now running, so we can have some fun:

Note that when you run the "show-splash" command, two windows pop up. This is because Plymouth simulates a dual-monitor setup.

To stop the Plymouth daemon:

This section is for advanced users only.

If you want to see the text-based boot messages (which use the Plymouth "details" plugin, press the ESCAPE key at any point when Plymouth is running. Note that the ESCAPE key acts as a toggle, so you can keep switching between graphical and text mode as required.

To have the boot start in "text mode" as early as possible, remove "splash" from the kernel command-line in grub.

Updating the grub configuration manually is a potentially dangerous operation and can result in a machine that fails to boot without intervention. Do not attempt it unless you understand exactly what you are doing.

You can set Plymouth to overlay internal debug messages (which will also be logged to a file) by adding the following command-line option to grub:

For older releases such as Maverick (10.10), hold down the SHIFT key rather than the CONTROL key to access the grub boot menu.

Plymouth will log all output sent to the console to a file. By default, the data is logged to file /var/log/boot.log. If Plymouth is running in debug mode, debug messages are logged to /var/log/plymouth-debug.log.

Note that plymouthd buffers all messages until told that the disk partition on which the logs are to be written (in other words the partition containing /var/log/) is writeable.

The Upstart job /etc/init/plymouth-log.conf is used to accomplish this by calling:

Used to prompt the user for an answer, echoing the answer text as it is typed. The answer is by default echoed to stdout to allow it to be piped to another command which expects to read the password on its stdin. Example:

Similar functionality is provided by a combination of "plymouth message" and "plymouth watch-keystroke".

Used to prompt the user for a password securely (password text is not echoed). The password the user enters is by default echoed to stdout to allow it to be piped to another command which expects to read the password on its stdin. Example:

The Ubuntu Plymouth theme supports a "special" message that allows mountall to display fsck progress messages ("fsck is 20% complete"). You can make use of this functionality by using a special message format: