Ubuntu has two systems for controlling whether users and apps can perform particular tasks.

If an app tries to access any of these interfaces, it should be subject to permission:

“Video recording” should be separate from “Camera” so that:

Therefore, if an app has permission to record video, it should have access to the microphone when (and only when) it is recording video.

(In Ubuntu Touch, sometimes an app needed access only to a single stored item — for example, a single contact or a single photo. In this case, the app accessed it through the content picker, rather than asking for access to all items of that type.)

So that apps are identified consistently in permission prompts, lists, and elsewhere:

All these prompts should take the form of a dialog that contains:

(The app icon, ellipsized label, app ID, and publisher ID are to protect against one app spoofing a different app.)

The layout of the prompts forms a sentence similar to structure “{app} wants to {do something}”. In some languages it may not be grammatically possible to construct a sentence this way. If so, in that language the prompt text should instead be a complete sentence of its own referring to the app above: “This app wants to {do something}.” Each prompt text string should have a translator note explaining this.

For all these prompts, because you are likely not expecting it, neither button should be default.

For all prompts that show a list of permissions:

Installing an app with required interfaces

If all the interfaces have installed implementations

This prompt should appear before the software begins to download. 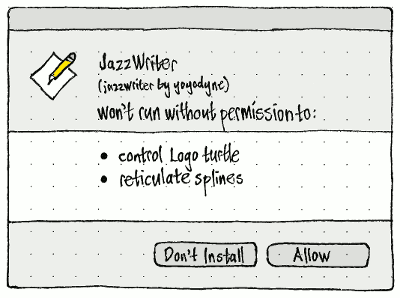 If any of the interfaces do not have installed implementations

This prompt should appear before the software begins to download. In rare cases, this prompt will appear immediately after the previous one. 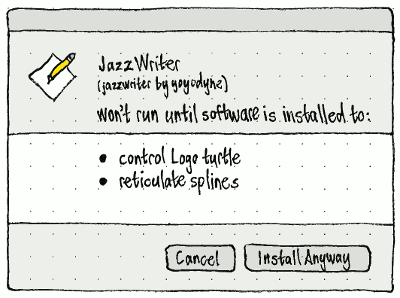 Launching an app with required interfaces, any without an installed implementation

This is the unusual case where you chose “Install Anyway” above, still didn’t install the needed software, and then tried to launch the app regardless. (Or you installed the app while having implementations of all necessary interfaces, and later removed one or more of the implementations.) 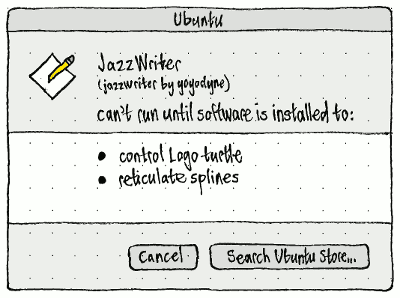 This dialog should be parentless, and therefore it should have “Ubuntu” as its title (the entity perceived to be responsible for launching apps).

App tries to use an optional interface at runtime

To prevent an app DoSing you into submission, if it tries to access an interface and you have previously denied it, it should silently be denied again. It’s then up to the app to either do without, or to plead with you to change it with a button for opening the relevant System Settings screen.

If you have not previously denied it, a prompt should open.

If the interface has an installed implementation

To avoid clickjacking an “Allow” click, the buttons should be disabled for the first two seconds that the prompt is open. For visual reassurance, a determinate spinner should fill over that two seconds.

If the interface does not have an installed implementation 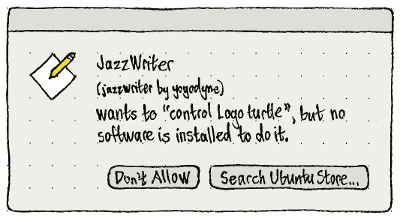 As well as launching your snap client to the appropriate search, “Search Ubuntu Store…” should deny the app permission (to avoid blocking its UI for the whole time you are browsing). But the app should automatically be removed from the blacklist, so that it can prompt again, when either (a) 24 hours has passed or (b) you’ve installed any software that provides the interface.

When you make a choice, in any of those prompts, to allow or deny a permission, that app should be added to the relevant access list(s) in System Settings (if it wasn’t there already), with its toggle switch state corresponding to your response. If an app is uninstalled, the setting should be cleared, so that it doesn’t show up in the permission lists (bug 1389775) — and so that, for lower-knowledge users, reinstalling works as a way of correcting a mistaken decision.

“App Permissions” is the global list of installed interface permissions, and apps that have access to each.

This list alone could be a minimal implementation, since it at least provides access to each app×permission combination, though some will not be where people expect to find them.

“View by app” should be the default selection, since for the most privacy- or security-concerning permissions, users are likely to look in the relevant tab (Location, Camera) or panel (Sound, Networking, or Printing) instead once app permissions are integrated there.

When “View by app” is selected:

When “View by permission” is selected:

Why did we take this approach?

Older versions of Android ask you to grant access to every permission an app might need before you install it. This is poor design for two reasons.

Second, an app might need a privilege only for an uncommon function that you personally will never use. Asking for that permission before installation would give you the wrong idea about how invasive the app is.

Both these problems are addressed by apps asking for access privileges at the moment they need them. It is still possible that an app might ask for a privilege needlessly, or without enough explanation on launch. But if so, you would likely downrate and/or uninstall it.

A request for authentication should have: 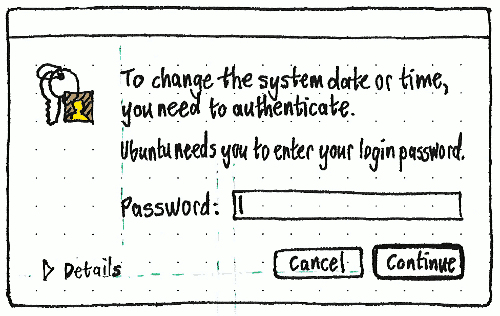 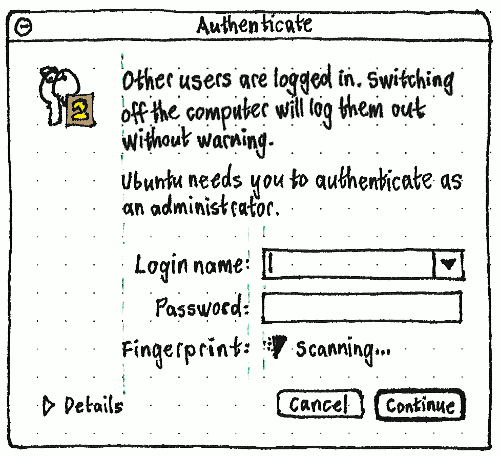 The authentication prompt should vary in appearance depending on whether it has a parent window, who you are logged in as, who you need to authenticate as, which authentication methods are required, and whether you previously authenticated unsuccessfully.

If the request for authentication has a parent window, and that window is still open, then the alert should be modal to the parent window (fixing bug 420641 and bug 877265) and should have no title.

Otherwise, the alert should have the title “Authenticate”, and should not be modal to anything (see bug 797960), so it should be minimizable.

As long as full-screen programs and screenshots are both allowed, it is impossible to style an authentication prompt in a way that prevents spoofing by a program running on your computer. For example, a system-modal shell-integrated prompt could easily be spoofed by taking a screenshot, displaying it full-screen, applying the same visual effects the real prompt does, and embedding an imitation prompt. If a baddie’s unconfined program is running on your computer, you’ve already lost.

What we can do, however, is to reduce the feasibility of spoofing the prompt on a remote Web page. We do this by using something that you know but Web sites don’t: the icon of your Ubuntu user account.

Therefore, the icon for the prompt should be the standard keyring icon, overlaid in its bottom-right quarter with your Ubuntu user account icon.

(This is still subject to the Simon-says problem: you have to notice that the icon is missing to realize that it’s a spoof. But it’s better than nothing.)

After an authentication error, the icon should be the standard error icon, overlaid with your Ubuntu user account icon in the same way.

The primary text of the alert should be the message for the action.

Next should be whichever credential fields are required for the user account, action, or group. “Password:” should be a standard password field. If a fingerprint or smart card can be used either for identification or authentication, “Fingerprint:” or “Smart card:” should be a slowly-animating scanner icon with the text “Scanning…”, replaced by a checkmark icon and the text “Scanned” once it is.

When the prompt opens, the first credential field should be focused, for example the “Password:” field if there is no “Login name:” field.

“Details” should always be collapsed by default. Expanding it should reveal a two-column table in small font, of “Vendor:”, “Program:”, and “Action:”, aligned with the credential fields above. Only the “Vendor” value should be a hyperlink to the vendor’s Web site. 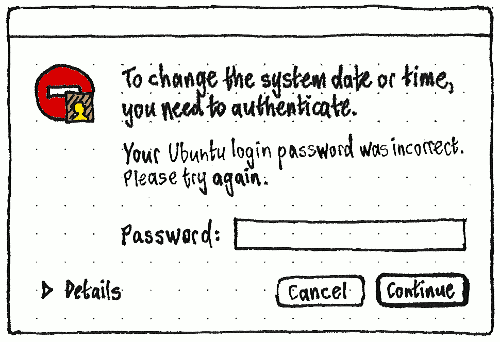