This is a WIP document

But there are several remaining issues:

In the below schema, imagine that PSU#1 is faulty. Now what if UPS #2 reaches low battery, and so cannot provide power anymore to the only valid PSU? The CLC will crash! 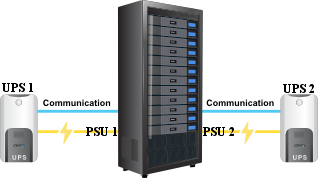 Moreover, with Cloud systems being more and more deployed, infrastructure tools are needed to ease deployment and management of the power infrastructure. A complete visibility of the power-chain would also provide more advanced features.

Each server has 2 PSU, each PSU is connected to an outlet of a PDU, and finally each PDU is powered by an UPS. 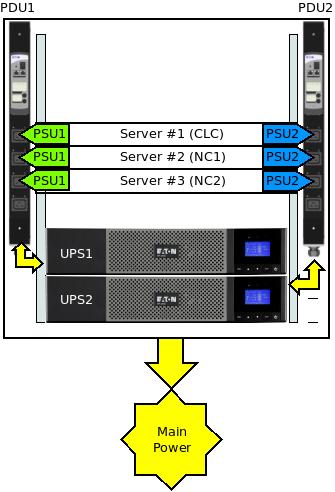 An example PowerChain for the CLC would be:

This specification defines the remaining tooling and missing pieces required to provide a complete infrastructure power management to Ubuntu systems, easily and by default.

You can have subsections that better describe specific parts of the issue.

This currently allows to generate support files for USB systems like hotplug and hal (both obsolete), udev and UPower at distribution (ie 'make dist') time.

This mechanism will be extended to SNMP information, and will allow to generate new headers and files, to create:

The following devices and systems will be supported:

Note: local PowerNap instance may also be discovered and considered.

The base idea is to publish NUT services on the network, through mDNS, using Avahi.

The idea is to have avahi-publish started along upsd and/or upsmon, and publish NUT essential configuration information.

This point is still under discussion: Augeas lenses for NUT, along with the various Augeas bindings and tools may be sufficient.

A high level Python wrapper may however be considered.

The idea behind the PowerChain is simple: there are many links in a power-chain:

Having a consolidated view on the whole allows real HA and SmartGrid features.

This feature requires data acquisition from the above devices, and a powerchain-aware monitoring system.

Links will be single linked to its parent.

As per the above, the interest for a NUT PSU driver is real.

To achieve this, the creation of a 'nut-psu' driver, using OpenIPMI, would for example expose the following NUT data:

Measurement data from the PSU are also be considered Commands, like on, off, reboot will also supported by NUT.

NUT provides an automagic mechanism that allows to declare hardware support information, like USB VendorID:ProductID and SNMP ones, to be declared only once, in the NUT driver. These data are then extract, at dist time (ie 'make dist' operation, used by maintainers to generate .tar.gz or alike) to create various support files, for: HAL and hotplug (deprecated), udev, UPower and for the upcoming nut-scanner.

An interesting point is that NUT is already serving as a knowledge base for an external project (UPower).

Considering this, a generic fence-snmp-pdu could be created, using automatically extracted SNMP information from NUT drivers, to deal with the many NUT supported SNMP devices.

This section should describe a plan of action (the "how") to implement the changes discussed. Could include subsections like:

This features is part of the NUT roadmap for 2.8.0.

Implementation has already started, and can be tracked on:

USB scan is mostly functional, along with local NUT devices detection. To test it:

The exact implementation will vary according to the init system used (sysV, upstart, systemd). For sysV, add a function to the NUT initscript(s),

Implementation of a Python module should be done in 'scripts/python/module/PyNUT.py'. The class should be named 'PyNUTClient'.

Packaging will happen in Debian, and will then be synchronized in Ubuntu.

With the 2.8.0 NUT release (around september), the following things are also scheduled: