The Lucid music store project aims to deliver the ability to purchase music from within a desktop music player. The overriding requirement of the project is to minimise engineering effort. This will be achieved through the usage of off the shelf solutions with minimal modifications. Only changes classified as blockers will fall within scope of this project. No effort will be expended towards improving the user experience of the default off the shelf components.

Changes to the TBD store

Changes to the music player 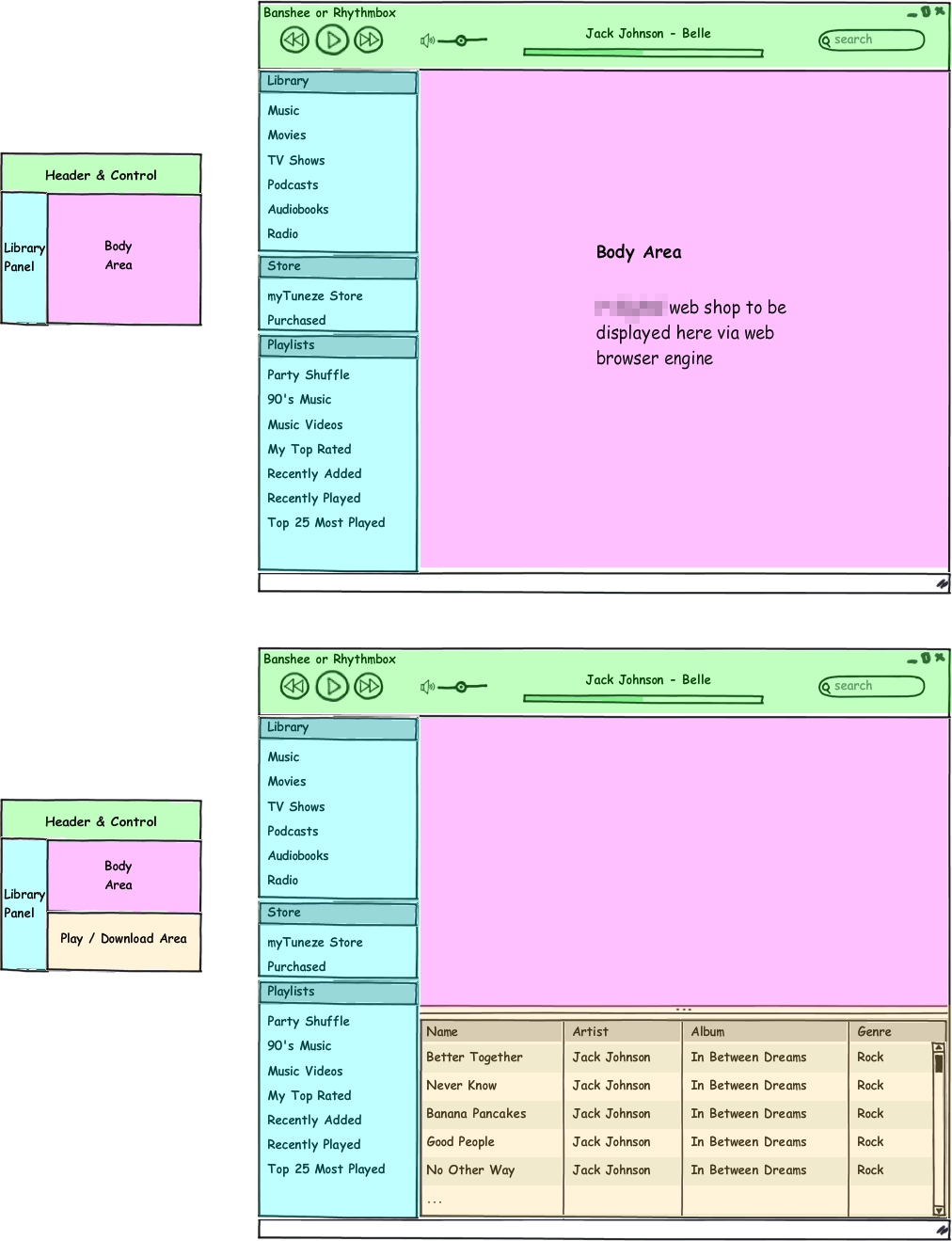 Important aspects of customization to consider

This should cover the _why_: why is this change being proposed, what justifies it, where we see this justified.

You can have subsections that better describe specific parts of the issue.

This section should describe a plan of action (the "how") to implement the changes discussed. Could include subsections like:

DieB: great idea. but pls use webkit for banshee too, since more and more browser-engines would give me more and more work to secure them and webkit is incorporated in gnome already (or use the gecko-engine, since it is also already on board)

AlexandreP: Not everybody use ~/Music as its default music directory. A user can select it's library location in Rhythmbox and Banshee (and probably in Amarok too, for Kubuntu users); downloading music in ~/Music if it is not the defined library location in the music player is, IMO, not logical and does not respect the user's choice. This plugin could download music in (1) the location defined by the user in its music player, or (2) to the location defined as the default Music directory in ~/.config/user-dirs.dirs, or (3) in Ubuntu One's folder, if this service is going to be integrated with Ubuntu One. My preference is to #1 (and I don't understand why changing the library location in RB/Banshee does not change the value of XDG_MUSIC_DIR, but that's another story).

ChrisH: Will UbuntuOneMusicStore be a retail front for other organizations (e.g. Amazon)? This is an important consideration because some of those organizations will not sell music downloads to some countries. For example, Amazon Canada does not sell music downloads and Amazon.com will not sell to Canada. HDTracks will only sell in the USA. Pandora will only work in the USA. I'm not sure what the nature of distribution agreements underlies this issue but offering a service to purchase music online that only works in certain countries would seem to be somewhat contrary to openness. On the other hand, if the UbuntuOneMusicStore will work universally, that would be a cool and amazing thing!

Pietro Battiston: Depending the details of the rhythmbox store interface, this may not be a blocker: still, it makes sense to point out that ~10% of online music sales consists in classical music (~12% for Amazon, at least), and that https://bugs.launchpad.net/rhythmbox/+bug/245281 is still open (no "composer" tag).

Samuel Sarette: Are we likely to see Amarok integration? I hear such things are very straightforward.