This is a living specification for graphical configuration of Grub2.

The “System” category of System Settings should include a “Startup” panel. 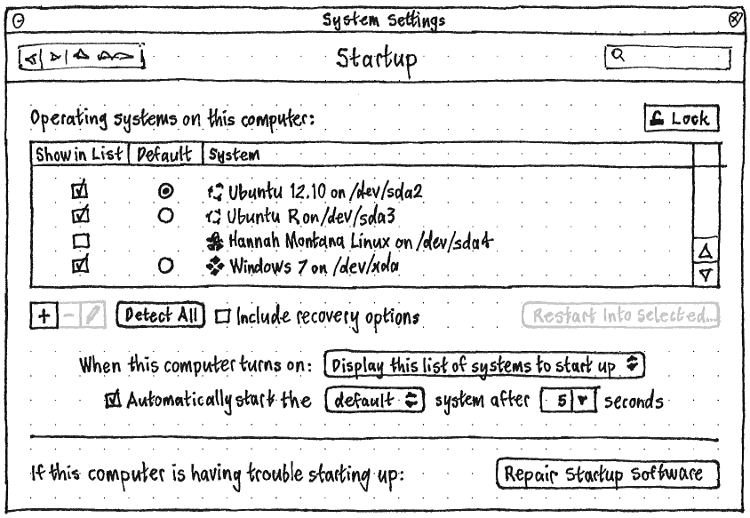 Whenever the panel is locked (as it should be by default), all controls except the “Unlock” button should be insensitive.

Whenever “When this computer turns on:” is set to “Use existing custom configuration”, all other controls — except the “Unlock” button, and “Repair Startup Software” and its label — should be insensitive.

“Operating systems on this computer”

The “Operating systems on this computer” list should show the union of those currently listed in /etc/grub.d/ — whether commented out or not — and those found the last time os-prober was run (if at all) since the panel was opened. Any system that is in the list, but that os-prober can’t find, should have a

Every system in the list should have a “Show in List” checkbox, which should be checked if the system is in /etc/grub.d/. (Checking it should add the system to to /etc/grub.d/.)

“Detect All” should run os-prober and repopulate the list accordingly, with new items being checked for “Show in List” by default. (So if you then close the settings panel, it should be equivalent to running update-grub.)

“Restart Into Selected…” should be sensitive whenever a system is selected in the list. It should open the standard Restart dialog targeted at the selected system (for example, “Are you sure you want to restart into Windows 7?”).

“When this computer turns on”

The “When this computer turns on:” menu should have three options: “Display this list of systems to start up”, “Start up automatically unless Shift is pressed”, and “Use existing custom configuration”.

The “Automatically start the” menu should have two options, “default” and “last used”.

The “seconds” combo box should have options “2”, “5”, “10”, “60”, and the current GRUB_HIDDEN_TIMEOUT or GRUB_TIMEOUT value if that is a different positive number.

The initial states of these controls, and of the “Automatically start” checkbox, should reflect the contents of grub.cfg as follows. If the contents of grub.cfg does not match any of these possibilities, then “When this computer turns on:” should be set to “Use existing custom configuration”, and until you change that, the rest of the panel (except for the “Lock” and “Repair Startup Software” buttons) should be insensitive. 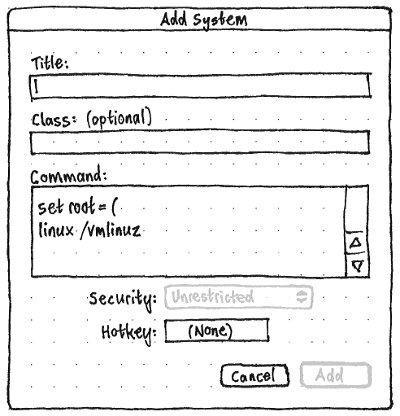 In the “Add System” dialog, the “Title:” field should be focused by default. “Title:” and “Class: (optional)” should be empty by default, and “Command:” set to useful boilerplate.

The “Security:” menu should be set to “Unrestricted” and insensitive until security is implemented in the GUI.

The “Change System” dialog should be the same as the “Add System” dialog, except with a “Change” button instead of an “Add” button.

If Ubuntu is installed on a partition but Grub is not installed anywhere (for example, you’re running from a live image on a computer where Windows has overwritten Grub), then the usual contents of the panel should be replaced… TBD