This is an incomplete specification for Ubuntu should handle data storage media and devices.

On a phone with Ubuntu installed:

When another device tries to read your storage

If you connect (or someone else connects) your locked phone to a device that tries to read its storage, it should be denied.

If you connect the phone while unlocked:

So that you can undo this decision, the “Security & Privacy” screen in System Settings should have a button for “Reset Storage Access…”. This should prompt you for your passcode/passphrase, then clear the choice for all previously connected devices. 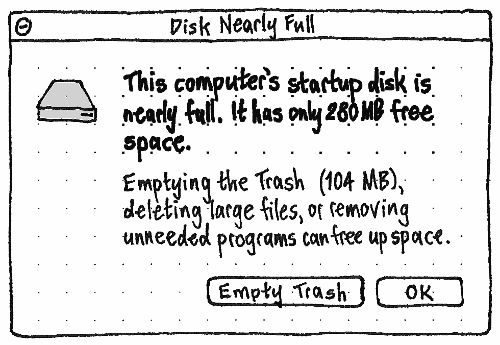 A storage warning or error condition should be presented in an alert box. (It is important enough that it should not disappear by itself, but it should still be possible to do other work while it is open. Compare with the “Battery Low” alert.)

Unless otherwise specified, the alert should appear whenever the warning state is in effect, and either:

In particular, an alert should close by itself whenever the warning state is no longer in effect.

This condition is when any non-removable, non-hotpluggable partition has both less than 1 percent and less than 50 MB free space: 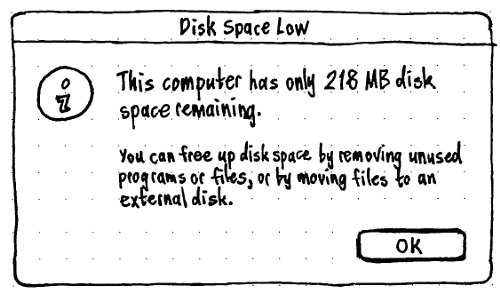 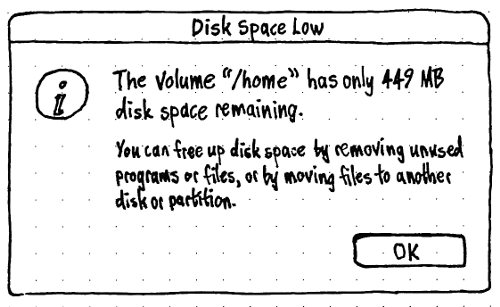 On the PC, the text of the alert should differ depending on whether there is more than one mounted partition usable for storing files on, and on whether the nearly-full partition has any items in the Trash.

When you are logged in and your Trash contains items using at least 0.2 percent and at least 10 MB of the disk space, then:

Otherwise, when the disk containing / has both less than 5 percent and less than 250 MB free space:

When you are logged in and your Trash contains items using at least 1 percent and at least 50 MB of the disk space, then:

The alert should switch between these two overall states, if appropriate, without closing and reopening.

Future work: Automatically free up disk space or inodes by deleting the contents of /var/cache/ ~/.cache/ or by actually calculating which folder/files use up a lot of inodes due to spamming the filesystem?

If Baobab is installed, an “Examine…” button should be to the left of the “OK” button. “Empty Trash”, when present, should always be the leftmost button.

On the phone, for now we have no general interface for deleting unwanted files. So the only help we can offer is, if you choose “Details”, to navigate to the “Storage” screen for more information.

Disk out of inodes

When no more inodes are available on a disk:

Should we also have a warning for when the disk is nearly out of inodes? If so, how nearly?

When a disk is reporting Smart errors:

“Eject” should be present only if it is not the startup disk.

Should we have intermediate steps towards “will fail soon”?

Future work: Offer a migration function that will copy all files from one disk to another, restarting before and after if necessary.

“Eject” should be present only if the Raid array is not being used as the startup disk.

This alert should appear only once, not repeating.

This alert should appear only once, not repeating.