This script will open gedit, enter "hello, world" in the edit window and save it as hello.txt. Check for the existence of this file to confirm that the script has worked correctly.

Dogtail ships with a script recorder that allows you to quickly record test cases, saving them in dogtail-python format. These will often need to be edited by hand afterwards to craft more useful test scripts but the script recorder is a great way of generating the bulk of the script.

To play back the script you have just recorded, simply click the Play button on the recording GUI. If the playback fails at any stage you should run the test script from the command line to get further information about the failure:

Failures in playback occur quite frequently and are often caused by the test system itself (including the system slow-down it causes) but may also represent a shortcoming in the accessibility support of the application being tested. The former can often be worked around by structuring the test differently or inserting pause statements.

Next we consider two recording examples, one which works as expected and one which gives an error when played back (on Hardy at time of writing)

The following screen shot shows a recording of the act of changing the view mode of the calculator from Basic to Advanced. 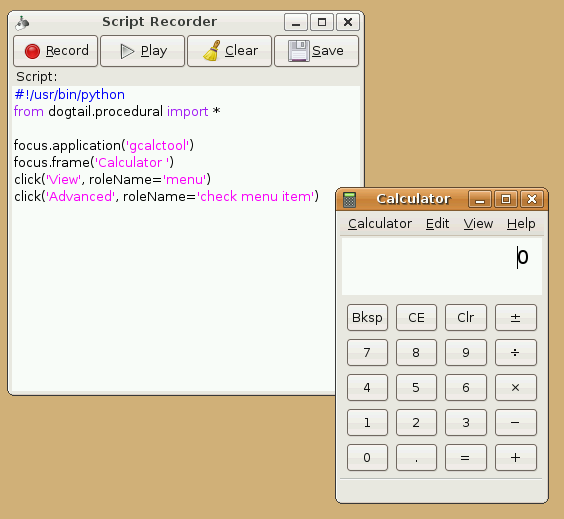 Changing view mode of the calculator

The script records and plays back as expected both in the GUI and on the command line.

In the next example we try adding 1 and 1 with the calculator. It records fine, but fails to play back. In the GUI ('Play' button) it just fails silently while on the command line it produces useful errors we can use to start debugging. 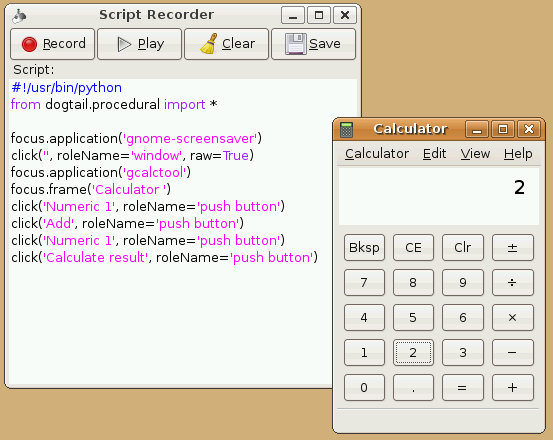 A simple recording of adding 1 and 1

TBD: write a more in-depth description on how to debug scripts that fail, including filing bugs against the test system (dogtail) and the application being tested. Also describe work-arounds to get the script running, like inserting timeouts or using keyboard shortcuts.

Beyond just getting the recorded script to work you might also wish to modify it to add functionality that is not possible to record. This may include adding loops for stress testing or combining several recorded snippets to produce longer tests. [write more detail on this]

You may want to read /usr/share/python-support/python-dogtail/dogtail/procedural.py to get a feeling for the API, though it is somewhat tricky Python code.

Some notes on the dogtail API:

Sample program to do a simple Gedit test

Save this as as gedit.py: