I think the current Ubuntu logo doesnt have enough character and is therefore not memorable enough...its nothing compared to a big X, or a colourful flag of Windows, which is why I'd like to suggest a new logo that has something todo with the name, the african name. The first time I heard "Ubuntu" I immediately thought how great it was that there was a supermodern technology (ie. linux distro) called something really primitive&old (ie. old african word), an interesting contradiction. How about if the logo reflected the actual name with an african medicine man's mask?? Something everyone associates with tribal africa, but in contrary to past suggestions is not discriminating in any way. It would make this distro much more memorable and interesting through this contradiction!

"the short marketing concept" We need style and trend to make ubuntu a stylish package, a PRODUCT, not an operating system, and outdo other products in style, as all distros/OSs have similar technology, you can only differentiate yourself with style!!

We need to aim for YOUNG people (highschool, college) because these people tend to be...

Here's the first of two final versions...final 'till anyone has any suggestions or shows any interest.... ubuntulogo

the second is simplified from a suitable "application icon" to a "product logo", thanks to feedback off the ubuntu forums... This one would probably be the most likely to get accepted as a mascot/logo. Due to it's assymetrical/wonky nature I think it shows ubuntu's less serious side very nicely, like their release names...(a side to things that most linux distros dont have). It also, through its imperfection, suggests "I'm only human"... that being the theme of ubuntu: linux for human beings!!! 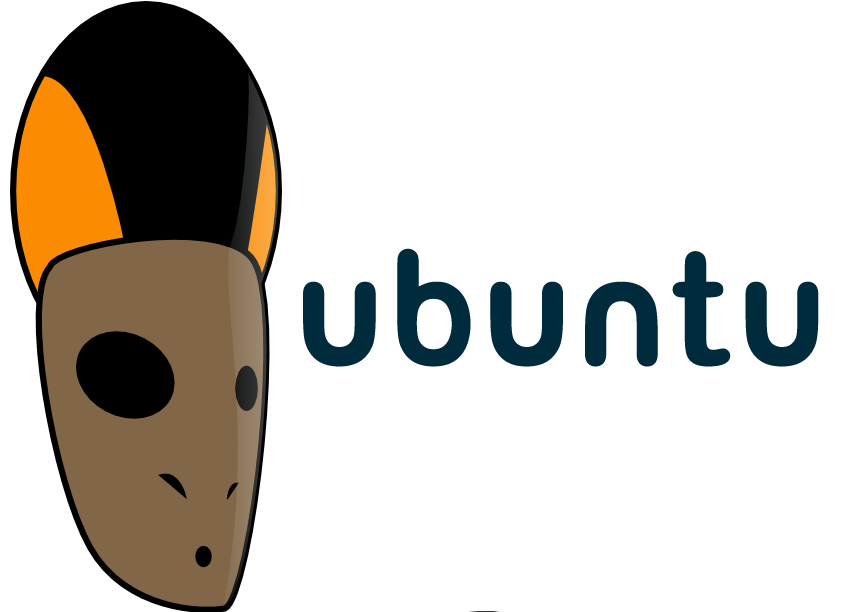 If not, maybe as an Ubuntu Mascot? "Ubuntu the Medicine Mask" (thats his name as of now...) could "help" people in Tutorials (like the old paperclip in MS Word...)? Maybe he'd be useful for promotional artwork? Boxcovers? Leaflets?

"the long marketing concept" I think the main thing about this mascotte is that it aims at young people... I myself am young (17) and I know for sure that none of my friends would EVER consider of switching to Ubuntu from Windows (okay, most of them dont know about it) as most of them dont want to be a computer "freak". So I think if Ubuntu could be cool/stylish, even cooler/stylisher than windows, they would switch! They would see it as a PRODUCT, not just as an operating system, and even better: a product they WANT and that's FREE!! Ubuntu could get the youth with this mascot! I think this is the only way of getting switchers, or even outdoing other Linux distros....having more STYLE, as this is freely available and easily implemented, unlike shiny user interfaces and fancy new technology... Most young people consider it an additional hassle to switch and there's no REASON to justify this added hassle, as windows can do everything just fine, and in some places, like IM, which is incredibly important and Gaim totally fails at, much much better. So we need to make a REASON for them to switch to OUR product: our product being cooler/stylisher than both all other distros and also windows that theyre using at the moment, and we need to make ubuntu a PRODUCT, instead of a operating system, removing the mental "i dont want to be a geek" block in their heads... we can do this by making the whole thing not marketed as an operating system, but as an experience...ubuntu, the african experience or whatever, just not ubuntu linux for human beings

If Ubuntu were seen more as a product, as a cool product, and not as some faceless, geeky operating system, then people would more likely, most especially younger people who we should target, to take into account the added hassle of switching, format/install and finally stay on Ubuntu. Ubuntu should be trendy.

Think outside of the box, people, make some art with character! Make some art that will make ubuntu so stylish, people (especially, YOUNG people) will want to switch to it as a cool (and also free!) product, and not only geeky types (myself included, of course) who want/like the OS.

The reason young people like Mac OS X so much is because it is stylish!

The originals are in SVG, email me if you have any interest... bahamutdunkel@hotmail.com

a simple version of the original medicine mask... medicinesimple

here's my latest&greatest, but also last suggestion: a medicine mask in the mac osx style...probably not useful, but fun anyway... medicinemac

Here's a thumbnail of the original... scales well, dunnit?? thumbnail

Here's the original quick concept done with my tablet... concept

Well, I don't think your logo will be accepted. Probably people will claim that the logo portrays all Africans as wild savages or someone feels insulted or something. Anything related to cultural heritage is usually off limits because people feel they need to tiptoe around history and cultures to avoid upsetting anyone. That said, the logo looks professional in ways of craftmanship, and I really like to slogan "Join the tribe". -- MikkoVirkkilä

I don't agree that the maskot skales well. Better too just keep the logo we've got, and establish it.

I like the first mask but not the simplified masks (rather too whimsical). I much prefer the original Ubuntu logo - distinctive, simple and tasteful.

I struggle with "what's up with the name" which almost 50% of reviews say at some point combined with "african mask." The current "out there" name with relatively conservative logo works better. This of course depends on who we think is the target market.

Distros don't usually have mascots. That said, I do like the mask idea, I mean mascots are fun and help build community support.

The current ubuntu logo ties in very elegantly with the meaning of the word ubuntu. Ubuntu , in Southern Africa, means brotherly -ness, neighbourly -ness or helping your fellow human beings. The root of the word 'buntu' literally means human being from which the word bantu - meaning 'a human' is derived. Ubuntu is literally about helping each other, or caring for your neighbour. The best known icon of ubuntu is Nelson Mandela who has brought about reconcilliation in South Africa. B.T.W. it was Nelson Mandela's birthday on the 18th of July and incidentally Mark Shuttleworth (founder and chief sponsor of Canonical and Ubuntu Linux) was born in Welkom, about 70km from where I am currently writing this message.

Given the above illumination of ubuntu as well as the appropriately themed current logo of three human forms (in different shaded colours btw) holding hands, my guess is that the logo for Ubuntu Linux is not going to change in the immediate future.

Wow! Didnt know that! thanks for the info! I'll leave it up anyway though, as some people seem to like it, and even if it isnt in the spirit of ubuntu, its definitely "cooler" than the current one, meaning that it would appeal more to younger people...

2005-11-16: I really like the second logo (the chaaman [sorry, don't know how to spell it :P]). I agree that it could be a great mascot as of a guide, some helping tool to learn Ubuntu (the distro and it's programs), a "Clippy"-like. But I have also to agree with the others: it wouldn't be a good Ubuntu logo replacement. It is too 'complex', unlike the window of Windows or the big X of MacOS X. You may also think of the giant yellow McDonald's 'M' arch, which is something really simple and that stays in mind, unlike, say, the Burger King's logo. I think the actual Ubuntu logo (the 3 friends' circle) is simple and clear and does its job very well; the chaaman could be used in tutorials, as a sympatic character or mascot that is here to help us

Nikolai is this what you mean, Alexandre&Pascal?! 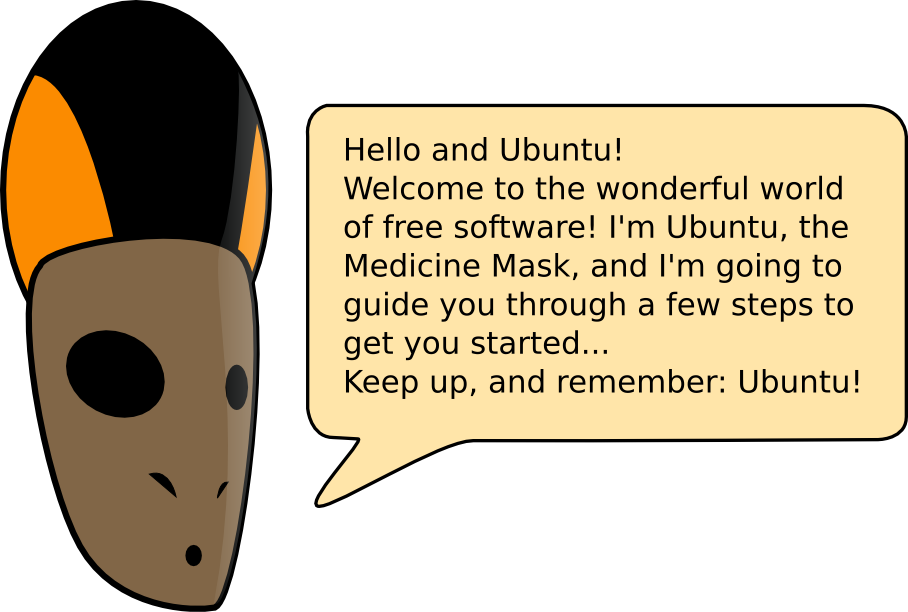 2005-11-19: I agree with Alexandre. The Ubuntu Medicine Mask is a great idea, and if well animated, it can help new users get into ubuntu, and will make ubuntu appealing to everyone. Always remember that in big Operating Systems, there's always a tutorial at the beginning, and it should have one in ubuntu. The UMM (notice the funny pronunciation) is really a plus. -- PascalPotvin

SaschaBrossmann 2005-12-24 02:29:04: While the mask may sure look stylish (though i associate e.g. not only african tribalism but also a christian bishop with mitre) it still lacks several qualities that are needed in a good sign to use in an identity. Especially one of a mass product like Ubuntu which needs to be able to be communicated to an extremely heterogenous public in respect to cultural background, education, age, etc. This requires amongst others extreme simplicity, universality (e.g. across cultures!), recognisability, scalability & cross-media fitness (from screen over small b/w fax header to large colour poster etc.) and *still* needs to communicate something particular important about the project. Unfortunately this normally leads to rather restrictive requirements which might result in something which could be considered a little bit more 'boring' than something which can be executed within a more focused frame. Consequently, I consider the current sign to be rather succesful at the given task and highly professional work (the idea of togetherness seems very well abstracted) which is anything but easy to top. Even as someone who has done identity work for some rather succesful and well-sustained larger projects i currently wouldn't dare to significantly touch it - lest replace it. Adding a kind of mascot is another kind of story, though this should ideally be also directly identifyable as an offspring of the current identity. Still, before that one should IMHO think about possibilities to re-use the current logo (or parts of it) for such purposes. Maybe it can be made to 'come alive', somehow?

One more thing, slightly OT re "The reason young people like Mac OS X so much is because it is stylish!": i do agree on the importance of a certain stylishness if you want to appeal to a younger (i.e. < 35-40y) crowd. Nonetheless, the success of Mac OS X cannot solely be attributed to stylishness but much more to said stylishness paired with rock solid and well concepted interaction design (resulting in high usability). This is about much more than just looks, as it needs to be considered at the very core of software design. And that's what makes the real difference and keeps people using something. Having the stylilsh looks without the interaction won't do. (NB: i don't think that Ubuntu should copy Mac OS X behaviour, which sure has its own flaws. It needs to get better than that, actually. And that's were the really hard work waits.) -- SaschaBrossmann 2005-12-24 02:50:13

Is this some new level of sarcasm or what? I wouldn't try using an OS with a logo/mascot like that. At least I wouldn't want to. It's weird, ugly and other things undescribable with words. That thing scares people away and can make things only less appealing. And it's far away in the opposite direction of cool. I like the idea, though, but other suggestions for mascot, please and thank you. No medicine masks. -- [Skiessi] 2021-06-22 11:56:57