As reported in the Fridge, Ubuntu won the Golden Penguin Award at LinuxWorld Expo 2006, playing against the Novell OpenAudio team. The Ubuntu team, consisting of volunteers Jorge Castro, Corey Burger and Canonical's Malcolm Yates, led the scoring from the very beginning and despite the Novell team's strong showing the the 3rd round, Ubuntu finished ahead. Congrats to all the players. See more at the Fridge: http://fridge.ubuntu.com/node/508

LinuxWorld Expo in San Francisco recently finished, and both the Ubuntu community and Canonical had a strong showing. Both booths were very busy, with many people discussing how they used Ubuntu or thanking us for making Ubuntu. The .org pavilion booth, run by the Ubuntu California team, was busy demonstrating Ubuntu 6.06 and all the great Ubuntu books currently out, while the Canonical booth focused on working business-to-business relationships.

At the GNOME booth, Ubuntu and GNOME community members Jorge Castro and Corey Burger helped the GNOME Foundation spread the message about how great GNOME was, which included showcasing the many great features coming both in GNOME 2.16 (due in Edgy) and beyond. Anecdotal evidence suggests an overwhelming number of visitors to the GNOME booth ran Ubuntu.

More information and a full listing can be found at http://www.ubuntu.com/security

There were no updates to 6.06 this week.

Glade 3 was uploaded this week. A description from the GNOME Journal "The GUI designer tool that has been building your GTK+ applications for years is back with a completely new generation of homegrown Free software. Supporting all the widgets in the GTK+ 2.8 family, gnomeui widgets, the GNOME canvas widget, and a whole new feature set; this new tool is sure to raise a few eyebrows."

This week we profile Peter Moberg, who is currently working on two tools for Ubuntu as part of SoC.

His first tool, called Panel Switcher, is designed to make switching panel layouts, even quite complicated ones, very easy. Implemented in Python and pyGTK, you can find more information at https://wiki.ubuntu.com/PanelSwitcher .

Session Backup, his other tool, allows a user to save and restore multiple GNOME sessions. As it stores the data in a zipped file, it also allows users to migrate that information to other computers. Also implemented in Python and pyGTK, you can find more information about Session Backup at https://wiki.ubuntu.com/SessionBackup .

In the most recent developer meeting - 17 August at 23:00 UTC in #ubuntu-meeting - the developers planned the list of topics to be discussed at next week's Development Sprint in Wiesbaden, Germany.

A number of features were reported as implemented or complete, including:

The desktop team is keeping very busy with bug triaging and fixing - and could use your help!

This week's full Launchpad news is at https://lists.ubuntu.com/archives/launchpad-users/2006-August/000536.html

We'd be honored to have you with us.

As always, the Bug Squad needs more help. If you want to get started, please see https://wiki.ubuntu.com/HelpingWithBugs 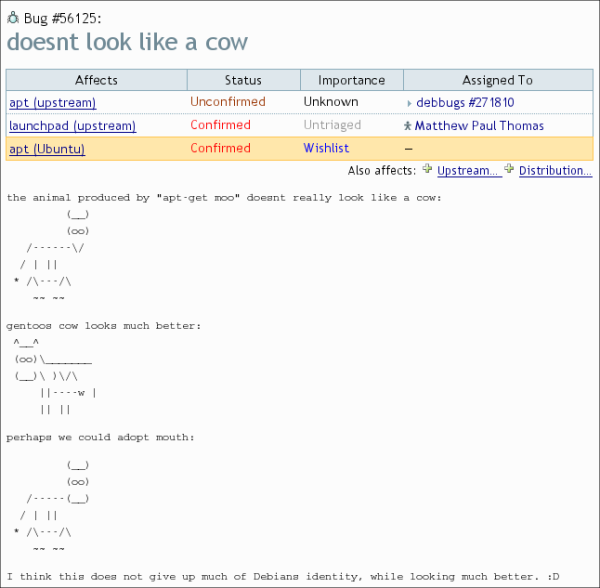 OSnews recently covered Bug #1, the "Microsoft has a majority marketshare" one. You can read more information at http://osnews.com/comment.php?news_id=15554

Ubuntu and Other Distros Rolled Out to American Students

Feature Of The Week - GNOME Deskbar

Deskbar allows you to embed an incredibly powerful search interface in a GNOME panel. Search across multiple search engines, enter an email address to send email, jump straight to a web page by entering the URL, or open files and folders by entering the path. There really are too many features to list. To see them all, and what's in store for future versions, visit Raphael Slinckx's blog at: http://raphael.slinckx.net/deskbar/

To add the Deskbar applet to your desktop just right click on an existing GNOME panel, select Add to Panel, and select it from the applets listed in the Accessories section. 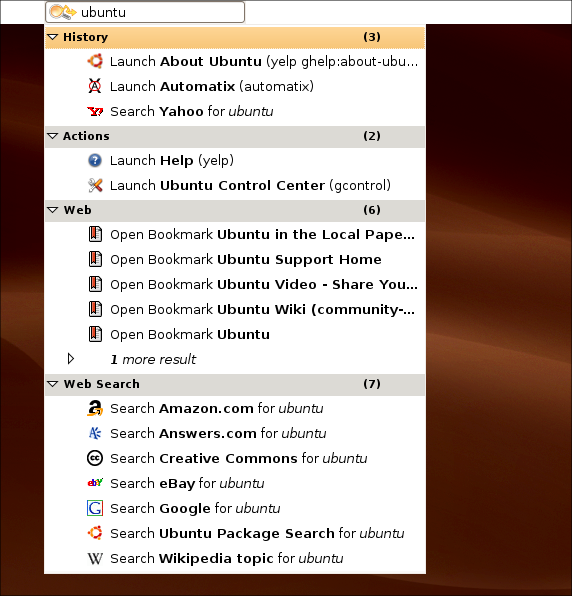