The Canonical distro team and a couple of community developers met for a week's hacking in Wiesbaden in Germany. Much feature work was done as we came to the Edgy feature freeze.

On the Thursday local IT consultancy company CC GmbH, who run Kubuntu on all their desktops, invited us to their offices and cooked us a South African dinner in their impressive kitchen. The dinner was commented on as "the best food we've ever had at our conferences".

Backports have been reopened this week, thanks to Colin Watson adding support in our archive manager Soyuz.

Scott James Remnant unveiled his new init replacement, upstart, this week. Sounds exciting, you say! Rather watch grass grow, would you? Fear not, Scott has told all in a long blog post, including about why you should care, the design, what upstart does currently and why not initng/launchd/SMF/something else. Upstart is currently only in universe, but as Scott explains in his blog post, upstart isn't quite ready for replacing sysvinit quite yet, but expect it go live in Edgy within a few weeks.

There were no security announcements this week.

There were three updates to X.org this week, backporting various patches as well as dealing with the breakage mentioned above.

Yaboot was also updated, to fix booting with XFS.

There were also a whole lot of backports, as mentioned above.

Matthew Garret uploaded a new version of X.org this week, which enables compositing by default. Quinn Storm, of compiz.net, has also begun working with the Ubuntu team to work on compiz in the Ubuntu repos.

Oliver Grawert has uploaded a new version of ltfsd, which enables local device support, otherwise known as being able to plug a usb stick into the thin client and have it show up on your desktop. Ubuntu's LTSP has also been updated to use this new code.

Brandon Holtsclaw uploaded Amarok 1.4.2, which adds DAAP support, MTP media devices (devices that are part of Microsoft's PlaysForSure use this, including players from Creative and others), custom last.fm stations and more.

As always, this is only a small fraction of cool and rocking new apps uploaded to Edgy in a single week. If you think we missed anything, please let us know.

Ken Wimer, the Kubuntu Edgy artist in chief, has been busy working on new artwork. The O2 theme has a definite purple feel to it is looking lovely.

Simon Edwards has reorganised the layout of System Settings based on ideas from Usability Ellen.

The kde-guidance package has gained a new power management applet in Edgy. This replaces the klaptopdaemon used in previous versions of Kubuntu. Try it out and let us know of your experiences.

We have added a KDE version of the HWDB client. This programme uploads anonymous information about your computer to our database at http://hwdb.ubuntu.com which can then be used in bug reports and helps us know more about our target hardware.

An interesting trivia question was spotted today on Washingpost.com: 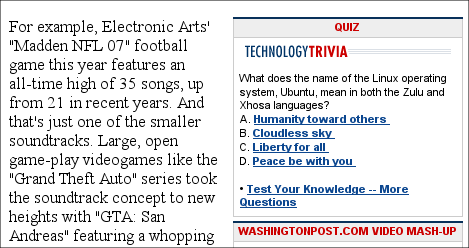 And the buzz continues. Technorati.com, which indexes over over 52 million blogs lists Ubuntu as its fifth most popular search: 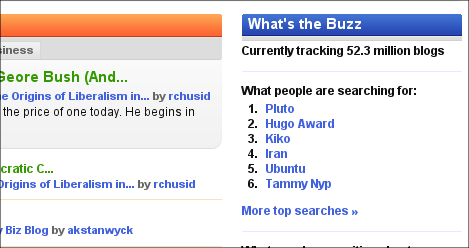 You can search for Ubuntu related blog posts at http://www.technorati.com

Thunar is the new lean and fast Xfce file manager. The first stable release will be included in Xfce 4.4.0 but it is available, in beta form, in Xubuntu 6.06. To install Thunar on any other flavour of Ubuntu, you can install it from Applications > Add/Remove and select it from the applications listed in the System Tools section. Of course, you can also enter sudo apt-get install thunar in your terminal and install it as well. Visit http://thunar.xfce.org/index.html for updates, screenshots, a feature list, and information about ways you can contribute to the project.