In 2010, Canonical created the Unity project as part of Ubuntu, aiming for a consistent and beautiful session-level shell implementation. From the very beginning, Unity's concepts were tailored with a converged world in mind, where the overall system including the UI/UX scales across and adapts to a wide variety of different form factors.

Note, the original project reference for Unity8 was UnityNext. As the project progressed, the name UnityNext has been replaced with versioning references. To help understand versioning and references to Unity are as follows:

To be clear, the same concepts described as the original Unity are still valid. Unity will still be a shell, with a launcher, indicators, switcher, dash etc. Many of the UI design concepts are effectively applicable to Unity Next with recent additions of stylistic improvements, which have been born out of the Ubuntu Touch Developer Preview effort, being extended by new key features such as the notion of the "side stage".

With convergence in mind, we also revisit our choice of technology. While the desktop version of Unity has been built on top of Nux, an attempt at an OpenGL-only toolkit, all of the other incarnations of the Unity shell have been developed on top of Qt/QML. In the past, we have chosen Nux over Qt/QML (version 4.x) to address our requirements for the ability to provide sophisticated UX and effects by leveraging pure OpenGL whenever necessary. However, with Qt5/QML2, we no longer see the need for a custom OpenGL-toolkit, as Qt5/QML2 allows us to easily access raw OpenGL features and performance. More to this, our experience with Qt5/QML2 during the Ubuntu Touch development was very positive, and we feel confident that it allows us to deliver a sophisticated UX across all form factors. Unity Next was developed largely using Qt Modeling Language (QML) on Digia's Qt framework.

With this particular shift in focus to Qt, it provides an opportunity to also revisit our approach to window management and composition. On our Ubuntu Touch Developer Preview we have initially relied on some modifications to the Android facilities. However a solution is needed to fulfill our Unity Next "look and feel" requirements across all devices, phone to desktop to TV. The solution decided upon is a related Ubuntu project known as Mir.

Unity Next will focus on two large efforts on the path to delivering an entry level Ubuntu Phone and eventually cross device convergence:

The ultimate goal of the next generation of Unity is to fulfill the following three requirements:

Translating this to a more technical level, the next generation of Unity needs to take the following requirements into account:

Note: the Unity Next project does not encompass Core Applications for Touch

Unity Next from a project perspective is about completing the shell UI implementation on Qt & integrating on top of Mir. Unity Next consists of effectively the same components as previous Ubuntu Unity releases, as outlined in the following diagram (please note that the spread component is not depicted for the sake of keeping the diagram readable): 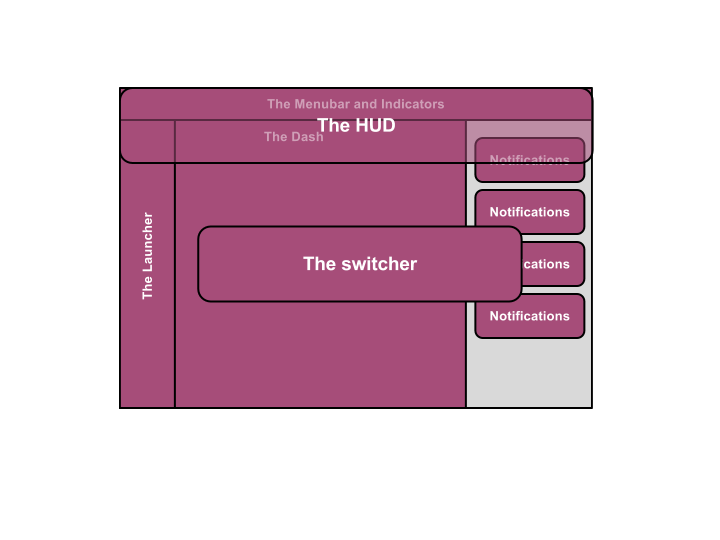 note: the term Panel is also used to refer to the component Menubar

This section defines Unity’s tasks and design with respect to managing the shell components introduced before and its scope with respect to integrating with the rest of the system. Please note that we focus on the main areas of functionality here, and do avoid too much detail for the sake of presenting a consistent and easy to understand overview. Given this (overly) simplified view of the world, Unity is essentially a state machine that is composed of the shell elements as sub-states. More to this, Unity is event-driven and alters the state of its subcomponents as a reaction to arbitrary incoming events. In this respect, events can either originate from input devices, timers, animations or the surrounding system. In essence, Unity is a controlling instance and takes care of synchronizing any required state transitions.

The state of the launcher and the menubar contains another pair of state, modelling whether these elements are hiding automatically or whether they are pinned and do not alter their state of visibility automatically. In case of both the launcher and the menubar, if their state is set to auto-hide, these elements are drawn overlayed on top of application surfaces. In any case, the flags need to be maintained per application instance and surface to allow a user to select on a per-application basis.

Next, we need to explore Unity’s scope with respect to application/window management and how it needs to be able to define behavior for focus selection, window placement and event propagation.

To implement the HUD functionality, Unity needs to be able to query any actions associated with an application instance, and be notified if these do change.

Unity in its role as the shell needs to be able to intercept the event stream before any sort of input event has been dispatched to ordinary applications. More to this, Unity needs to be able to consume input events and prevent those from being propagated further to either system level components or to ordinary applications. To this end, Unity needs to know about a so-called InputManager that allows for registration of input filters.

Managing multiple monitors will be an essential task of Unity in that it is responsible for presenting a user with ways to specify monitor arrangement, display mode (clone vs. multiple desktops) and a primary display. To this end, Unity needs to be provided with a component, we call it DisplayManager, that is responsible for detecting any changes to the current monitor/display configuration and to switch on/off specific displays. Please note that this component should also report changes in orientation to the display.

Inter- and intra-application data exchange is an important part of the overall shell user experience. Here, we normally do consider two different mechanisms to initiate the data exchange and for identifying data source and target, i.e.:

The overall operation can be split in two steps: First, the user specifies the data source and the actual data to be exchanged, and second, the user identifies the data destination. Once these steps are complete, the actual exchange operation starts, including format negotiations between source and destination and actual data exchange in the case of drag’n’drop. For copy’n’paste, a decoupled model will be deployed, without any sort of communication between source and destination. From Unity’s point of view, the actual exchange mechanism is unimportant and it only cares about the first two steps carried out by the user. To support these steps, we introduce a DataExchangeManager that abstracts away the implementation details and provides Unity with functionality to keep track of current operations, where each operation is identified by a source and a destination.

Unity heavily relies on animations and smooth transitions to provide an appealing and responsive UX to users. To make sure that animations and transitions are perfectly synchronized with the rest of the system, Unity needs to know about a tick and a time source that is valid for the overall system. Both should be abstracted to account for future changes and to help with testing.

Putting together what we have said so far in a diagram, the inner core of Unity becomes well-defined functionality-wise. For the components described before, implementations are provided by Mir and we achieve a very tight integration of the shell that in turn allows us to deliver a shell implementation that fulfills the requirements stated in the very beginning of this document. However, as we have clearly stated our expectations regarding the components provided by Mir, we can still test both Unity and Mir in isolation in a very efficient and straightforward way and only need to consider sophisticated full-stack testing for any remaining integration issues. In particular, Unity Next will rely on and have exclusive access to the rendering capabilities offered by Mir. 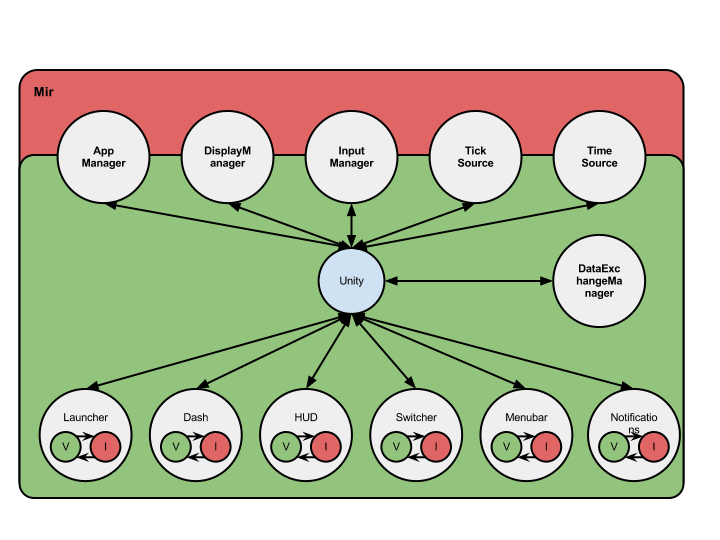 In this respect, Mir acts as an abstraction layer that allows Unity to easily move across different form factors. 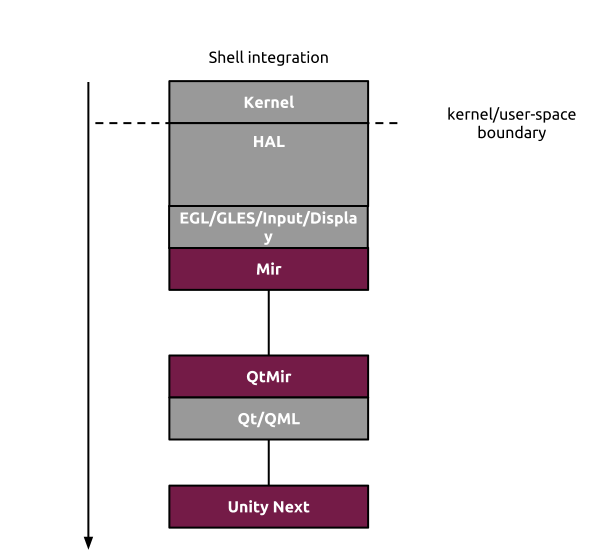 Applications are offered with the following means for deeply integrating with the Unity shell:

Applications can provide the shell with a way to describe the menu that should be displayed on an application’s dock icon. This menu is displayed next to the dock icon whenever the user expresses the intent to reveal them. As with the main menu, the respective actions are parsed and processed by the HUD searches for later search operations executed via the HUD.

The Unity shell offers multiple “stages” that an application can be run in. Here, a stage corresponds to a certain area of the screen together with stage-specific interaction schemes, stage-specific focus semantics and stage-specific display constraints. Applications will be able to transition between different stages and can express their capabilities in this respect. 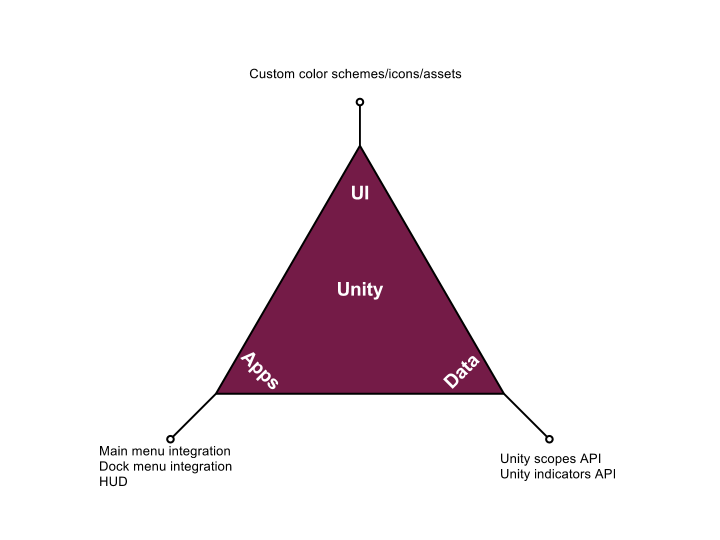 A Unity scope is an entity that renders a certain data source searchable and accessible to the Unity dash. More to this, it allows for surfacing content to the user, where content is consciously kept broad. It could be music, videos, pictures, applications, weather forecasts or something completely different. To achieve this goal, a scope provides means for querying the data source, returning search results in a well-defined schema that is shared with the Unity dash and its lenses. Search results from multiple scopes are then post-processed, rearranged and finally presented to the user.

In Unity shell UI, an indicator graphically represents the state of an application or subsystem, e.g. network status. Indicators are icons or labels that have a menu associated with it. The menu provides more specific status information as well as commonly-used actions to change the state, e.g. connection to a wifi network. Depending on the form factor, indicators are displayed by some kind of panel or menu bar in the shell. However, the actual logic for an indicator resides on the subsystem or application side in this context called indicator service provider. Unity exports the service data across the process boundaries into the shell UI and renders the menus. One single indicator service might export multiple indicators.

COMPLETE: Target of having a first level/functional integration of Mir & Unity8. While complete this integration happened in midsummer rather than May.

COMPLETE: Target of having a Mir-Unity8 code base that could be taken to product on a Phone.

It may be helpful before going further to visit the project and look at the Dependency Diagram towards the bottom of the topic-u-unity-ui blueprint, which essentially reflects all work feeding into achieving convergence. This is currently planned out for our 14.04 release.