This page describes methods for installing specific Software in the current 64-bit Long-Term Support edition of ubuntu, including adding specific repositories and commands. The current version is 14.04

Some of the choices here are based on my specific hardware and preferences. They are documented in order to allow other users to install some, or all, of the software. The instructions assume that the current version has been downloaded and an initial clean install has been completed.

This section identifies the setup for Software Sources.

The Software Sources page has five tabs. My recommended settings for the tabs are shown below. In order to change your settings, select the item that you wish to change. For the first time you change an item, you will be asked for your password.

The Ubuntu Software tab should be set as shown below: 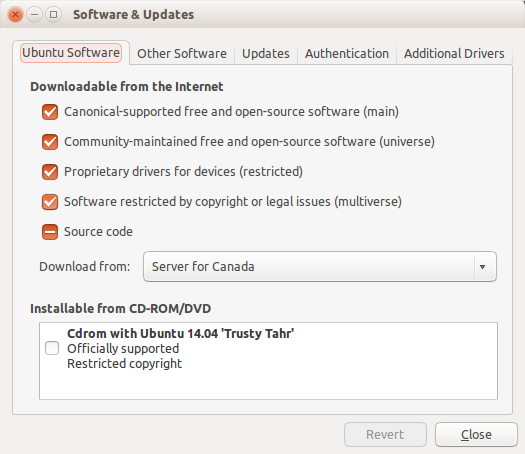 On the Other Software tab, ensure that the Canonical Partners Repositories are enabled. Any other changes to the entries in this tab are managed by adding or changing Repositories, which will be described as needed in the remainder of this documentation. 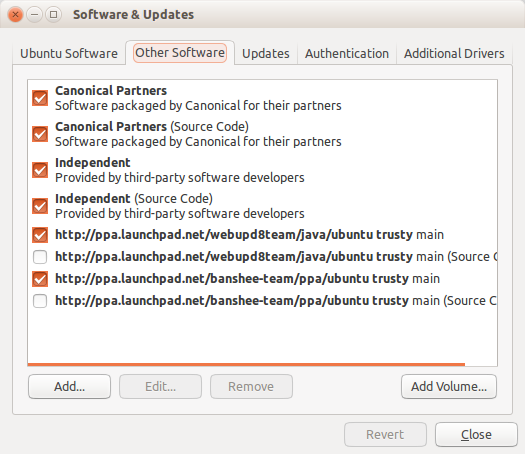 The Updates tab should be set as shown below: 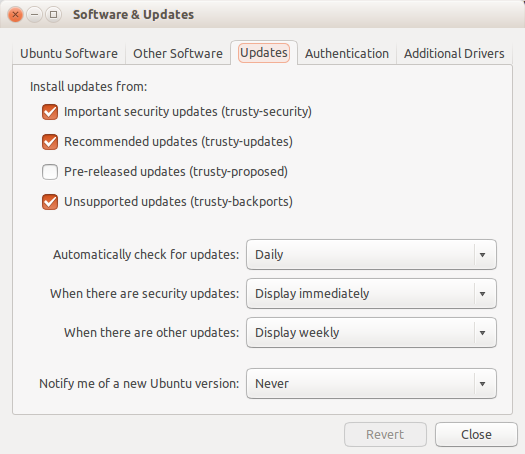 Authentication contains the keys that are used to verify that software being downloaded does come from a recognized repository. These keys are managed when additional repositories are added.

A sample Authentication tab is shown below: 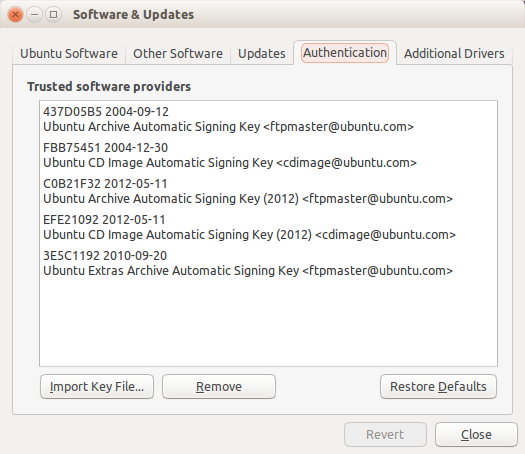 I have an nVidia graphics card. There are a number of ways to add the drivers for these cards to an Ubuntu installation. For my purposes, I do not need the latest and greatest. The drivers in the repository are satisfactory. They can be added using the screen below: 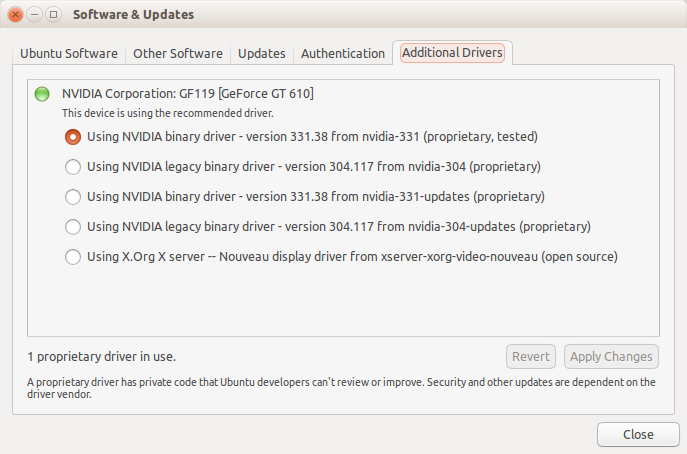 There are two components to Oracle Java - the JRE (Java Runtime Environment) which is used to execute Java programs and the JDK (Java Development Kit) which is used in the development of Java programs. Java was first created by Sun Microsystems. The original software license allowed for Linux distros, including Ubuntu, to maintain the packages in their archives, simplifying the installation. Oracle Corporation purchased Sun Microsystems in 2011. The license terms for Java have been changed in such a way that Linux distros can no longer directly maintain the package within their archives.

To add this PPA, copy the following text into a Terminal and execute:

There are two current versions of Oracle Java - Java 7 and Java 8. Only one should be installed.

I like the look of the Faience GTK theme, built by Matthieu James. He has set it up in a PPA, which can be installed as follows:


After the next reboot, the Faience theme can be selected using the Unity Tweak tool. The installation instructions for the Unity Tweak Tool are provided later in this document.

There are several media players that can be used in Ubuntu. In particular, Banshee and Clementine are two that I have used. Either one may be installed from the standard respository, but both also provide PPAs that provide updated versions.

Banshee supports multiple discs and has a clean interface. There is some controversy within the Linux community about this project, since it uses mono. I have no issue with Microsoft. More information about the mono controversy can be found in the following article: Why is Mono so Controversial.

The following commands are used to install Banshee from an updated repository:

Clementine supports multiple discs and has a relatively clean interface. This music player does not use mono and works very well. This is the one that I generally install.

The following commands are used to install Clementine from an updated repository:

Google Chrome is a web browser developed by Google. The code is proprietary. The major reason that I use Google Chrome is that it contains an updated version of the flashplayer software from Adobe. Adobe has abandoned further development of flashplayer for Linux (see the following article: Adobe Abandons Linux in ZDNet), but is developing for Google Chrome.

Care must be taken in following the instructions - the Repository will be added twice. It is critical that the duplicate entry is removed.

Once these are completed, open the Software Sources. In the Other Software tab, check for two entries for http://dl.google.com/linux/chrome/deb/. One of these entries must be removed.

The standard Repository contains specific versions of Application packages, such as LibreOffice. Security updates are applied, but very rarely are the packages updated to later versions. This provides stability, but does not allow access to updated features.

In my case, I prefer to have access to updated features, but I do not want to be at the bleeding edge. Most of the applications have PPAs setup in ubuntu that contain stable backports. In other words, if LibreOffice releases a new version, then the team reponsible for LibreOffice in ubuntu will test it and may provide an update that can be used in the current Ubuntu release.

The following are the archives that I use to provide relatively stable updated versions of selected software:

There are two ways to add an archive:

This is software that is installed from the repositories and the PPAs.

This is the additional software that I typically install from the Repositories. Each item may also include other items to be installed. For example, the mozilla-plugin-vlc will also include the Video LAN Client (VLC) software.

If the Source Settings and Repositories are set as shown above, then the following command will install all of the suggested software. This can be copied from here and pasted into a Terminal. During the installation, there will be one license agreement confirmation for Microsoft (the additional fonts).

This is software that is not installed from the repositories.

Fluendo Group is a company that specializes in the creation and distribution of gstreamer codecs for various audio and video formats. The benefit of using these is that they include a license for the codec. They include codecs for Windows Media Lossless format and several other proprietary formats. The fees are very reasonable (IMHO) and I have been using them since 2008. They recently have been included in the Ubuntu store. Their website is http://www.fluendo.com. The licenses are purchased for a specific term. During the term you may download and install any updates to the number of computers covered by the license. I don't run virtual machines, so I don't know how the licensing works in that environment.

Once paid for, you may go to their download page and download the appropriate file for your system (either 32-bit or 64-bit for your distribution). Once the download is complete, you then double-click on the file to install it. It will be installed using the Ubuntu Software Center.

Prior to installing Eclipse, ensure that the Oracle Java software has been installed and is the current version.

This is a general purpose IDE used for development. This is installed directly from the website (http://www.eclipse.org), since the version of eclipse in the repositories is not current.

These instructions have been updated to Eclipse 4.4 (Luna).

When this installation is complete:

If you have a LightScribe enabled disc drive, then there is software available that will allow you to prepare disc labels in Ubuntu. The software is no longer being actively developed,but can still be downloaded from third-parties.