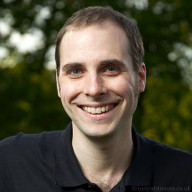 By day, I'm an IT Manager at a Further Education College in the UK. At night I am a photographer (and have started a wedding photography business) and media geek. I live in Hampshire, in the UK and started using Linux whilst at university in 2001. I've been using Ubuntu since 2006.

I have been one of the creative team behind the Ubuntu Podcast from the UK LoCo since its beginning in early 2008. Over 1.5m downloads later, the fortnightly show has developed a loyal audience from around the world. Our listeners are a mixture of developers and newcomers and we have received several e-mails from people who have found their way into Ubuntu as a result of listening to the show.

I am one of the principal organisers of the annual OggCamp event. Although not strictly an Ubuntu event, there is a large Ubuntu presence from the UK LoCo and the last two events have had Ubuntu install stands and include a live recording of the Ubuntu Podcast.

I am a member of the Ubuntu UK LoCo and attended two Linux Expos in London to staff the Ubuntu community stand.

I gave a talk on media production on Ubuntu as part of Ubuntu Open Week. I also gave a talk about our experiences with the Ubuntu Podcast at LugRadio Live 2009, OSSBarCamp Dublin and BarCamp Soton.

I attended UDS-Intrepid and UDS-Jaunty to conduct video interviews with developers, track leads etc. and publish them on the Ubuntu Developers Youtube channel.

I blog about a variety of Ubuntu-related stuff.

I was a judge on the Ubuntu Free Culture Showcase community artwork competition for three releases.

I was chairman of Hampshire LUG for two years and programmed a number of talks about Ubuntu in that time. I gave talks on installing Ubuntu from scratch and wireless networking on Linux among other topics.

Plans for future contributions, eh? Well, these are the plans I have at the moment:

Tony has been (apparently) tireless in his commitment to events like OggCamp and in creating important community resources like the Ubuntu UK Podcast. He's also a tremendously nice fellow. andypiperuk

Tony has persistently, over about seven years, produced and run the Infopoint Project site, which has been the justification and the grounding basis for my own activity of Infopoint displays at the monthly Bracknell Computer Fairs (6 years and counting)(original concept from Jono Bacon). Without the visibility of the site, it would be difficult for me to maintain the Infopoint 'branding'. I am delinquent in not keeping my entries anywhere near up to date, but the site is hugely important to me and the ongoing advocacy work. Thank you Tony! (alan cocks) candtalan

I've known Tony for around 8 years now, initially through his work in our local Linux User Group, then through our work together on the Ubuntu UK Podcast and more recently OggCamp. Tony is quietly enthusiastic, conscientious, friendly, accommodating and reliable. Tony was one of the first people I approached when setting up the Ubuntu UK Podcast and since the very first day Tony has made a significant and sustained contribution to the team. Without him the podcast would almost certainly not exist, and would not have the arguably high quality content and audio production values it does. -- AlanPope

Tony has been doing a fantastic job on the podcast communicating Ubuntu to the UK. His presentations on podcasting have been seen by a wide audience and inspired others to start podcasts and improve their production quality. A great member of the community and the ideal candidate for membership. -- alanbell 2011-08-31 17:22:46

Tony is one of the friendliest blokes you could meet, meaning that he can easily diffuse tension and encourage others, so everything he's involved in is that bit more pleasant to work on. His enthusiasm and positivity are contagious. His work on the Ubuntu UK Podcast alone should qualify him for Ubuntu membership but he also has a record of years of other experience and contributions both to Ubuntu and the UK open source community. -- matthew.revell 2020-08-07 19:39:18

Tony is one of the most laid back people I've ever met when it comes to running a conference, I've had the pleasure of working with him for the last 2 years with OGGCamp and he has also taken part and spoken at OSSBarcamp. His attention to detail makes working with him means there are never any hiccups, but also it's fun taking part in events with him. He also encourages others to get involved by way of UUPC and even helped to get me on the podcast! czajkowski 2020-08-07 19:39:18

I've known Tony for some years now; he's always been enormously helpful both to me and, I've seen, to other Ubuntu users both in person and on the YK loco IRC channel. His work as part of UUPC has also been a great source of Ubuntu news. sil 2020-08-07 19:39:18

I am proud to say that whilst never meeting Tony face to face, he is the first person within the Ubuntu-Uk podcast team I would wish to have at any meeting - a friendly, knowledgeable human being with technical skills as the cream on the cake . suprengr 2020-08-07 19:39:18