This is a Google Summer of Code 2010 project.

jobs-admin, in short, is a replacement for services-admin in gnome-system-tools but written with Upstart in mind. jobservice is a generic dbus backend for jobs-admin which talks to Upstart and manages service-level settings.

jobs-admin is a new application intended to replace the lost functionality of services-admin during the Upstart transition. It provides an user-friendly way to enable, disable, and change settings of services and jobs. jobs-admin is available at System > Administration > System Jobs.

services-admin, a part of gnome-system-tools, exists for the purpose of simple service management. It uses system-tools-backends to handle the work of enabling and disabling services, and is able to use multiple backends. However, these backends are assumed to conform to a certain model that uses runlevels as a primary concept. Upstart does not depend on runlevels and so does not fit into this model very well. Attempts to implement Upstart support in system-tools-backends were unsuccessful or required strange workarounds.

After discussions with the maintainer of gnome-system-tools, we will create a new set of utilities to manage services, keeping Upstart in mind from the beginning.

As services-admin used to be available on the default CD distribution, it would be nice to see this available on-disc as well to bring back simple service administration.

The current target systems are Maverick and Lucid (latter via PPA). We can assume that both will have some version of Upstart available and that both may still use some System V scripts.

jobservice exports available jobs over DBus in a manner that is easy to implement in any application. It abstracts the different service backends into one interface, removing the complexity of using services in an application. An average Maverick system using jobservice would have both upstart_0_10 and sysv backends active, but an application doesn't have to know to be able to use it effectively. jobservice will use PolicyKit for controlling access to job management.

jobs-admin is an application that can take advantage of jobservice, and is the main application used when managing services/jobs.

Both jobservice and jobs-admin are implemented using Python. This ensures a small file size while being easy to develop and debug.

jobservice will read "service-level settings" (SLS) from a system directory such as /usr/share/jobservice/sls. SLS files will have an XML-based format (for easy i18n) and will contain information on service setting names, descriptions, types, value constraints, and other variables needed to automate service configuration. Initially, jobservice will ship SLS files for common system services.

This specification is being implemented by Jacob Peddicord as a Google Summer of Code 2010 project.

The jobs-admin UI is a simplistic GTK+ interface: 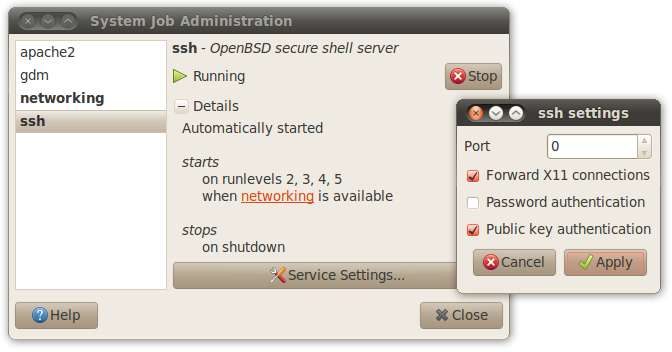 The main window on the left contains the main job listing (left) and job details (right). From this window a user can view information about when the job starts or manage it on their own. Clicking the "Service Settings" button will bring up the dialog on the right, which is dynamically generated from service-level settings shipped on the system.

The interface is not final; the provided screenshot above is a Glade mockup.

jobservice is only used over DBus, and does not provide any graphical interface other than the occasional PolicyKit popup.

Both jobs-admin and jobservice are new projects and do not require any changes to other packages.

Since service management has been absent from Ubuntu for several releases, there is no data to migrate. Users should be instructed to find the utility under System > Administration > System Jobs.

Tests are planned via PPA once ready.

Other packages that ship a service should also ship a service-level settings file for jobservice to parse and jobs-admin to present to the user. If a SLS file is already shipped by jobservice, the new package should add a "Replaces: jobservice" line to the packaging to overwrite the file.