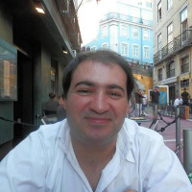 I've been working in IT for 17 years, taking several roles related with software development, but also systems administration.

I've been early on involved with the Portuguese community, in several ways, my first attempts to participate date at least as early as of May 2005 (https://launchpad.net/~diogo-santos).

Most of my contributions have been in organizing or contributing to organizing within the Ubuntu Community, both in Portugal and Europe, but also in promoting Ubuntu, and establishing relations with other Free Software communities, organizing and helping the organization of small monthly events, and bigger events at national and European scale, and representing Ubuntu-pt and UBports.

Over the time, I participated both on technical and the social events organized by the Ubuntu-pt Team, or where the team joined. 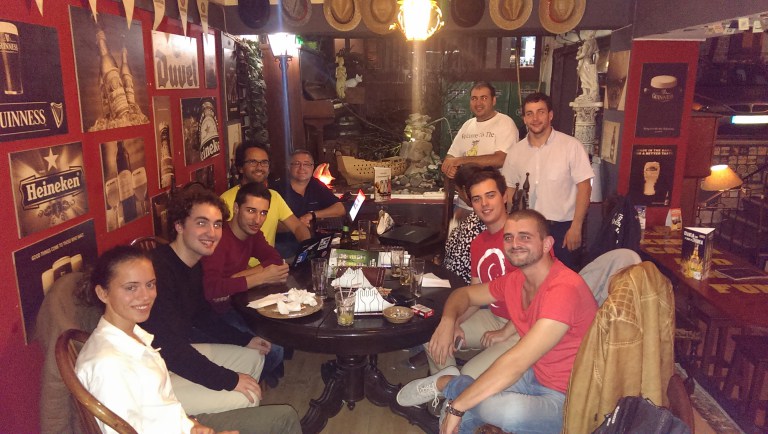 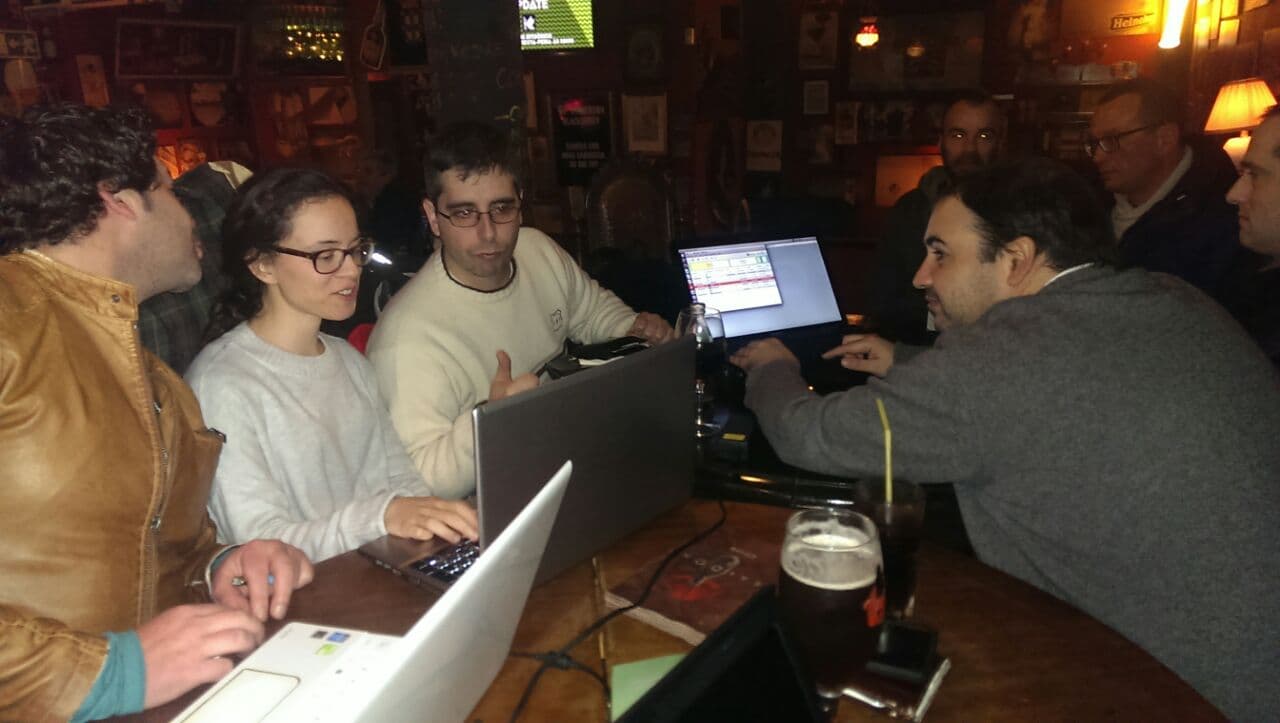 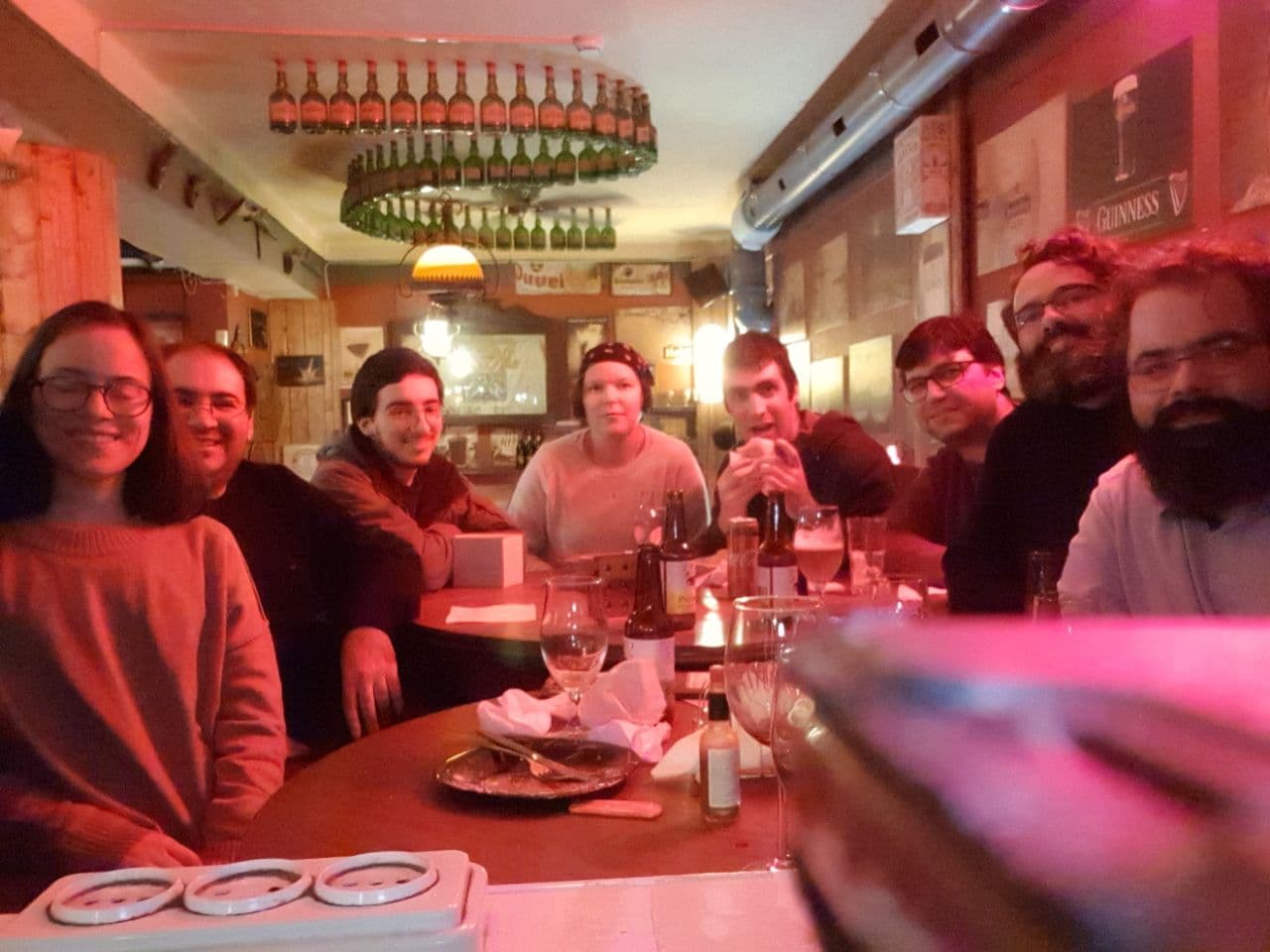 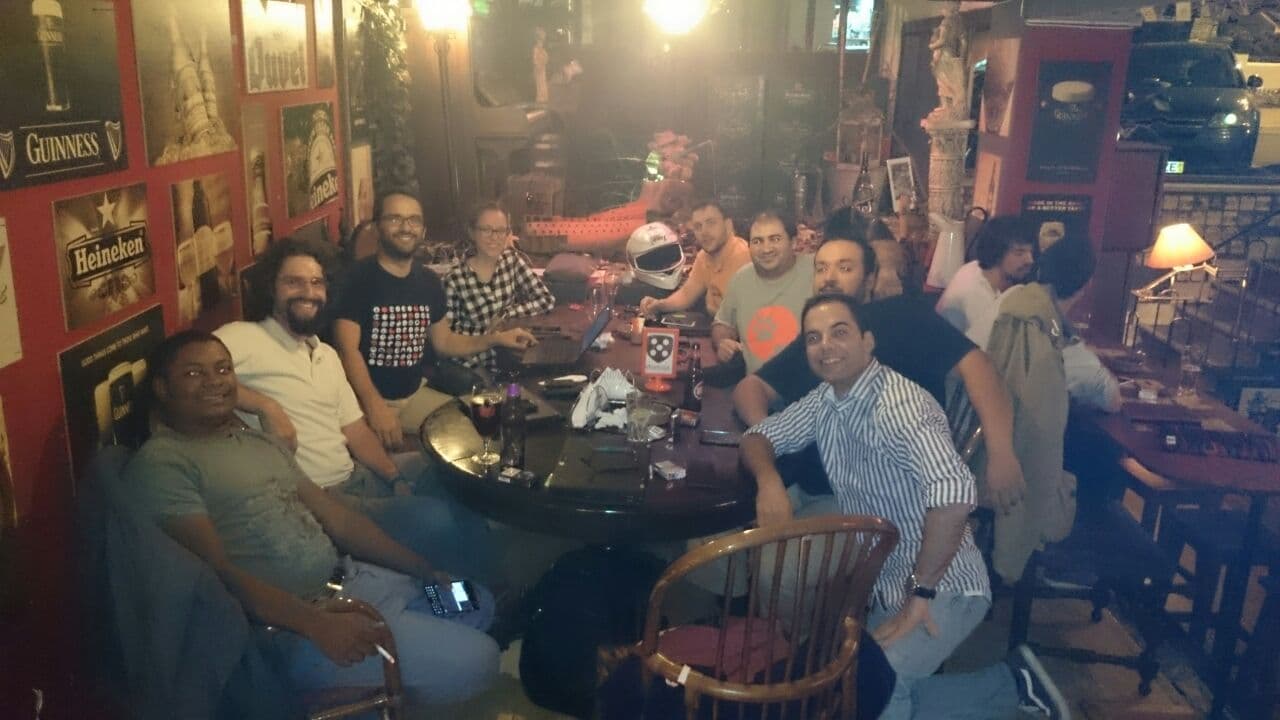 Some of the most relevant contributions

I'm unable remember the date and timeline off all things I've done to promote Ubuntu, and for the Ubuntu-pt community, but here are a some that I can (thanks to all those that assisted me with that):

In 2011, I was already joining technical and social events of Ubuntu-pt, such as the one that jneves and igama organized for the Ubuntu Global Jam in April. 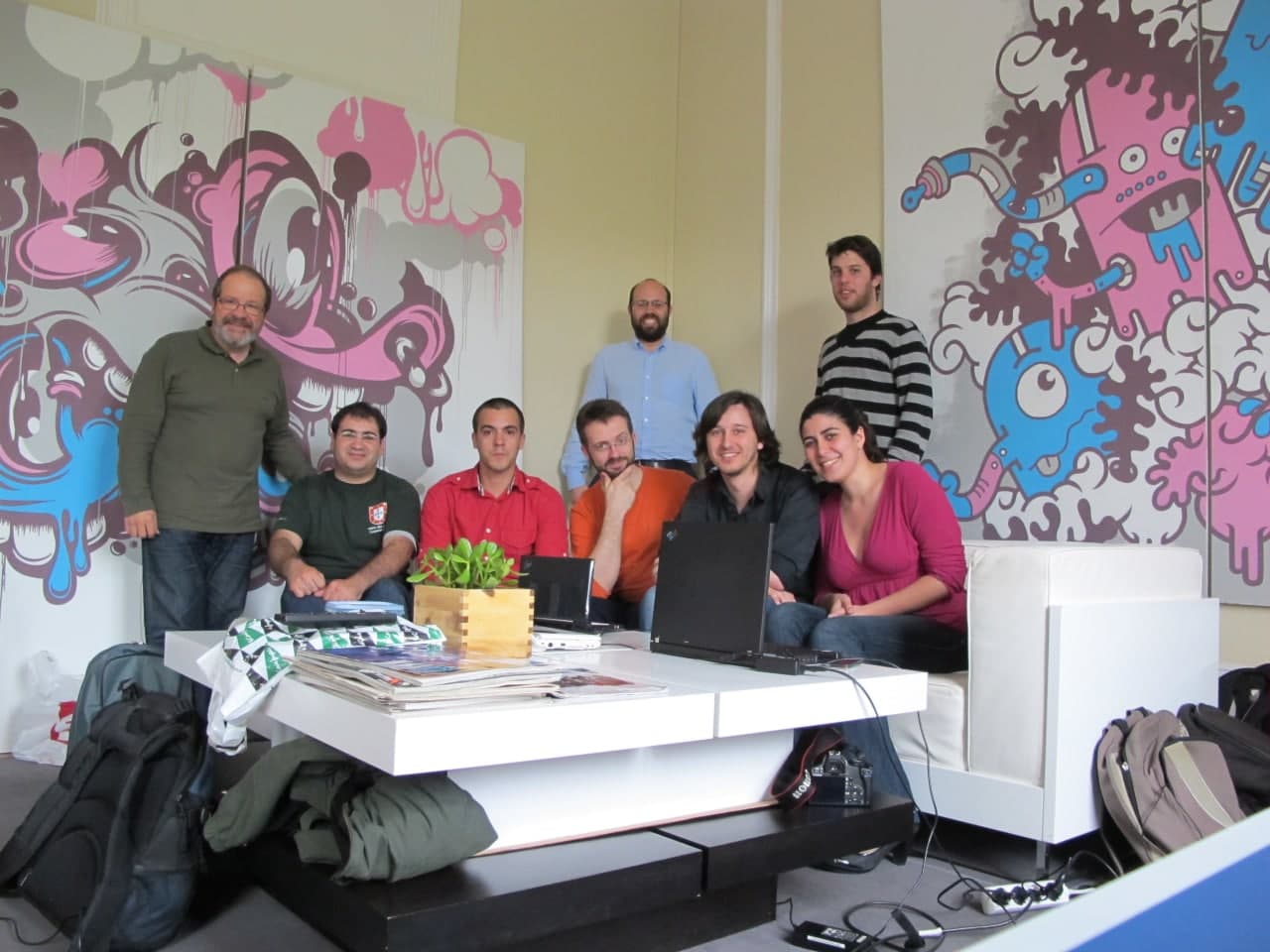 At the Ubuntu Day at ISCTE (2014), co-organized by the the ISCTE (a public university in Lisbon) ACM Chapter, and the Ubuntu-pt Team, I managed one of the multiple tables to discuss Ubuntu and related topics. 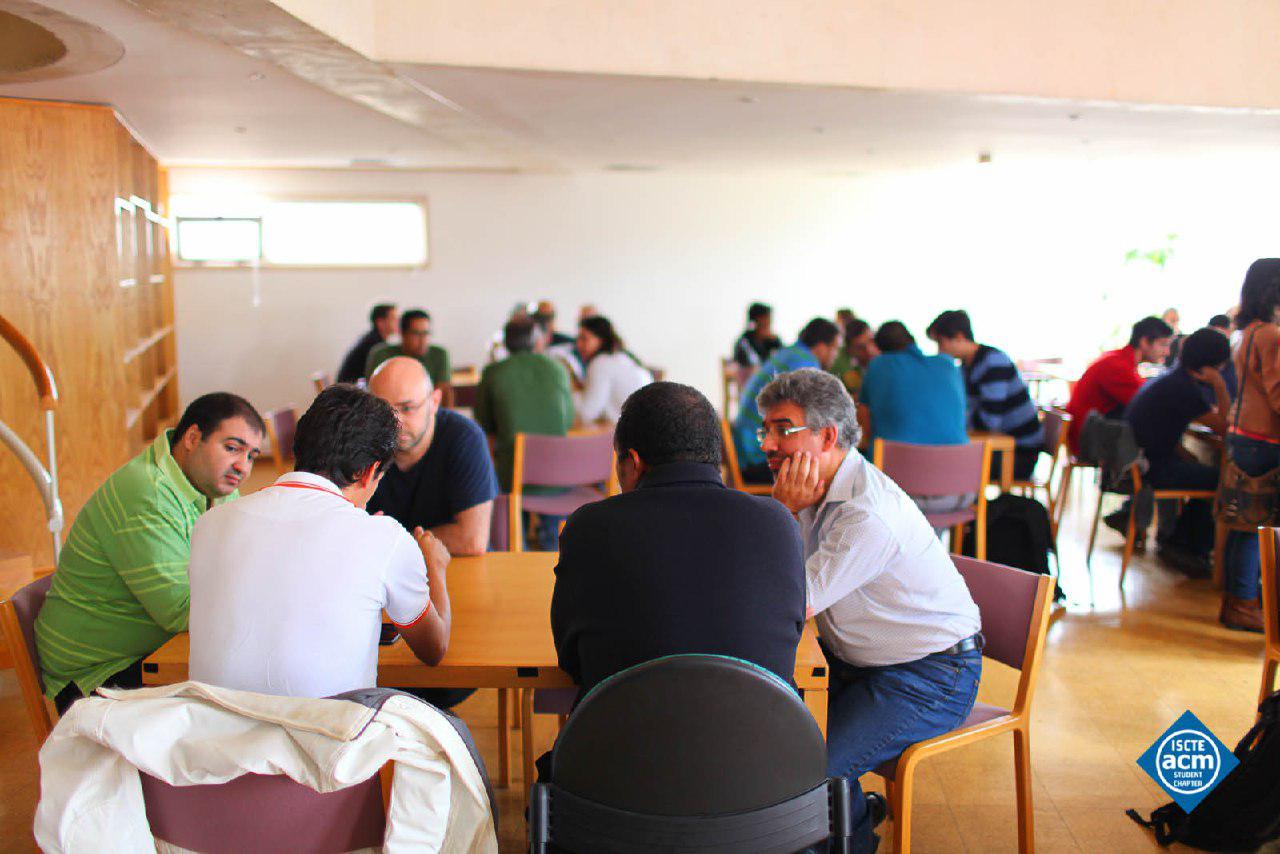 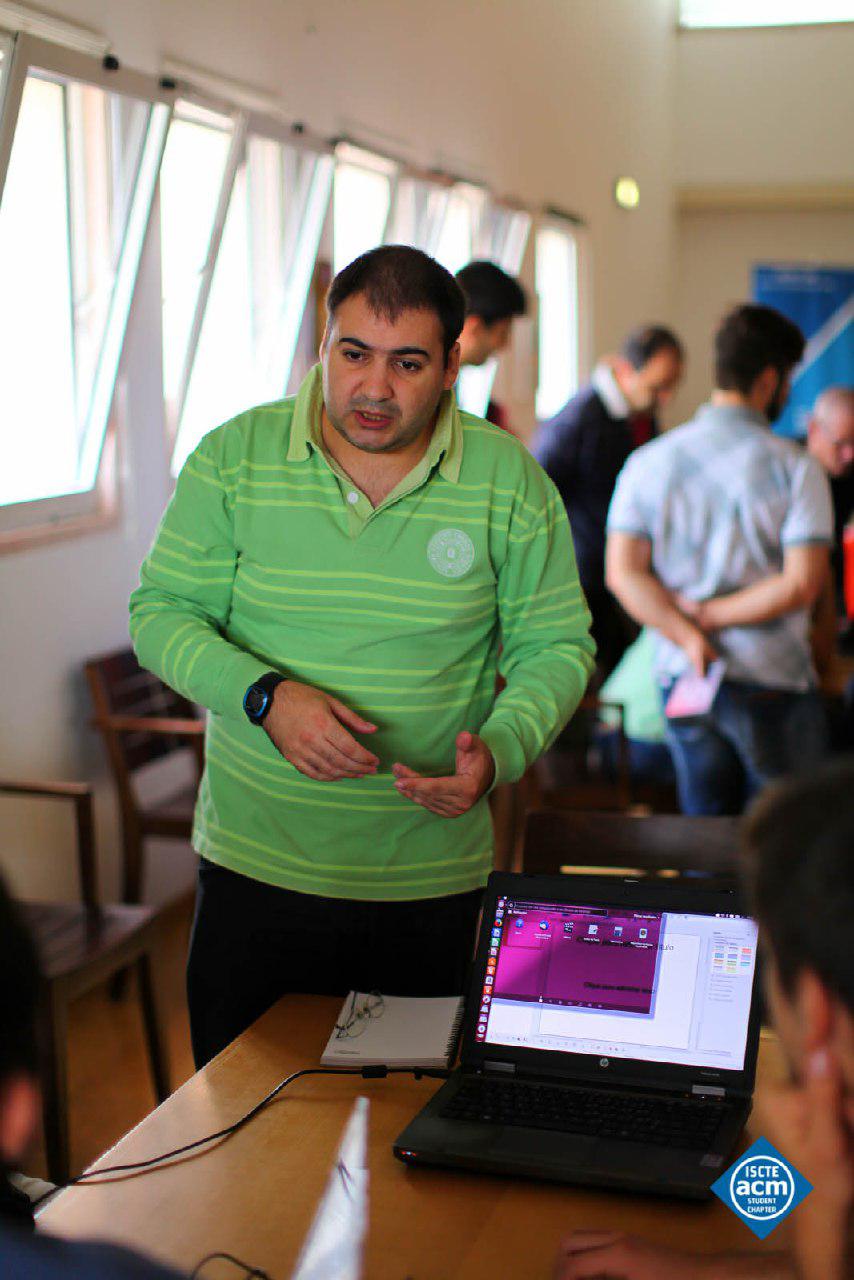 Besides multple onthly meetups of Ubuntu-pt, I and two other members of Ubuntu-pt attended Ubucon Europe 2016, where the Portuguese Team members established a long standing relation with several other LoCo, with the UBports Community, which help facilitate several Europe wide community activities, including the organization of further editions of Ubucon Europe. 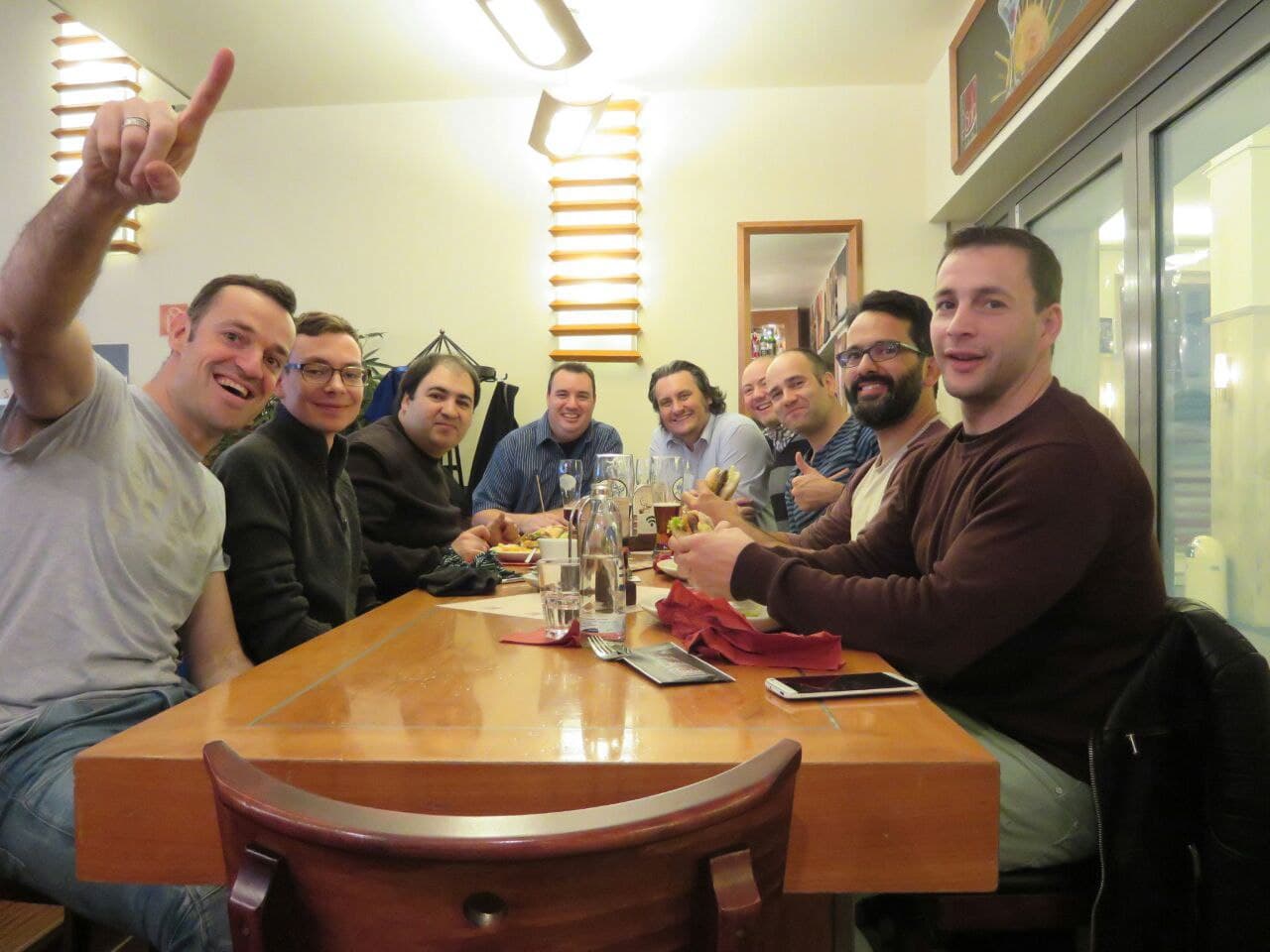 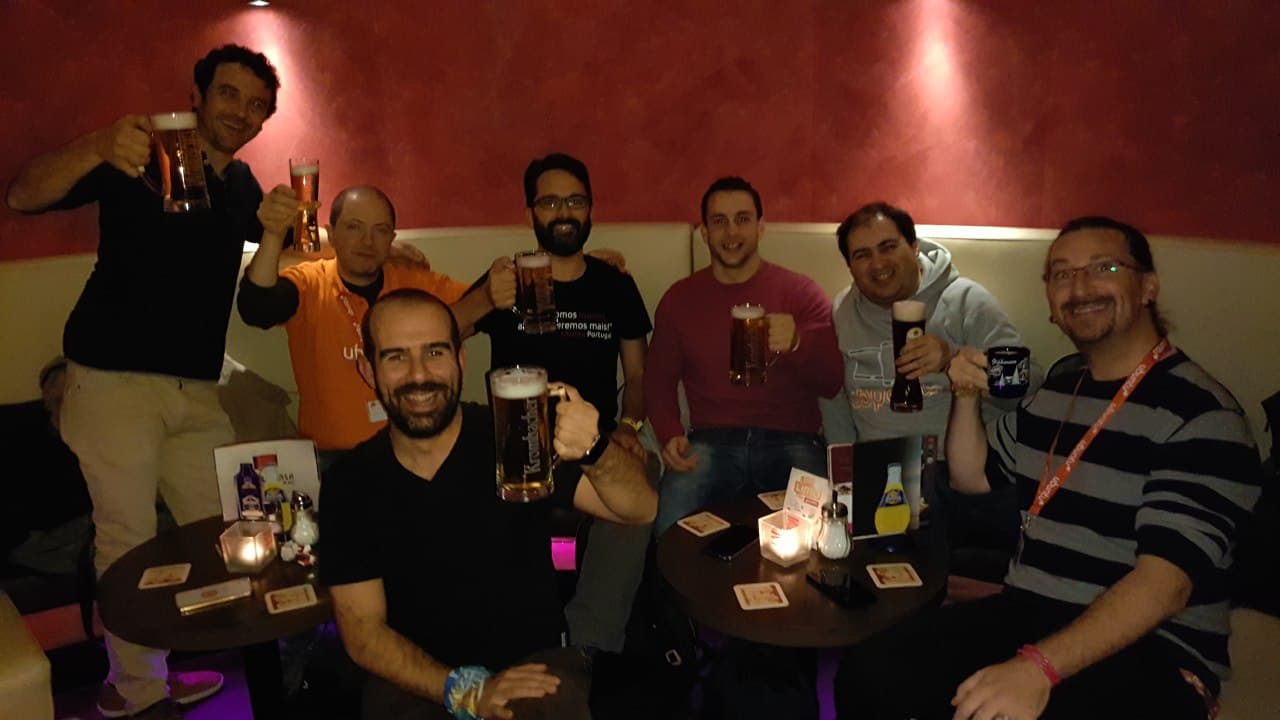 I became one of the Ubuntu-pt community managers for the Ubuntu Touch Portuguese user community which organized on a Telegram group, which on a latter was integrated within the UBports Community as the Portuguese Language Group (including many people from overseas that speak Portuguese) co-managed by Ubuntu-pt and UBports.

In May, me and tcarrondo, started producing Podcast Ubuntu Portugal, which debuted to the public on the 12th of June.

At FOSDEM 2018, I for the fist time organized an Ubuntu Community Dinner as an official FOSDEM Fringe event that was joined by community members from several European countries, Ubuntu Desktop and Mir team members

I helped founding and became President of the Board of the Ubuntu Europe Federation (an Association of European Ubuntu LoCo), in order to help Ubuntu LoCo taking care of bureaucracy and promote cross LoCo cooperation.

At Ubucon Europe 2018 I was a speaker, recorded a Live Podcast, and co-hosted a meeting of the Ubuntu Europe Federation.

In 2018, I organized a gettogether/meetup to celebrate an OTA update of Ubuntu Touch, with the participation of the Canonical Mir Team where we had the opportunity to strengthen the relation between both groups and fostering cross project contributions. 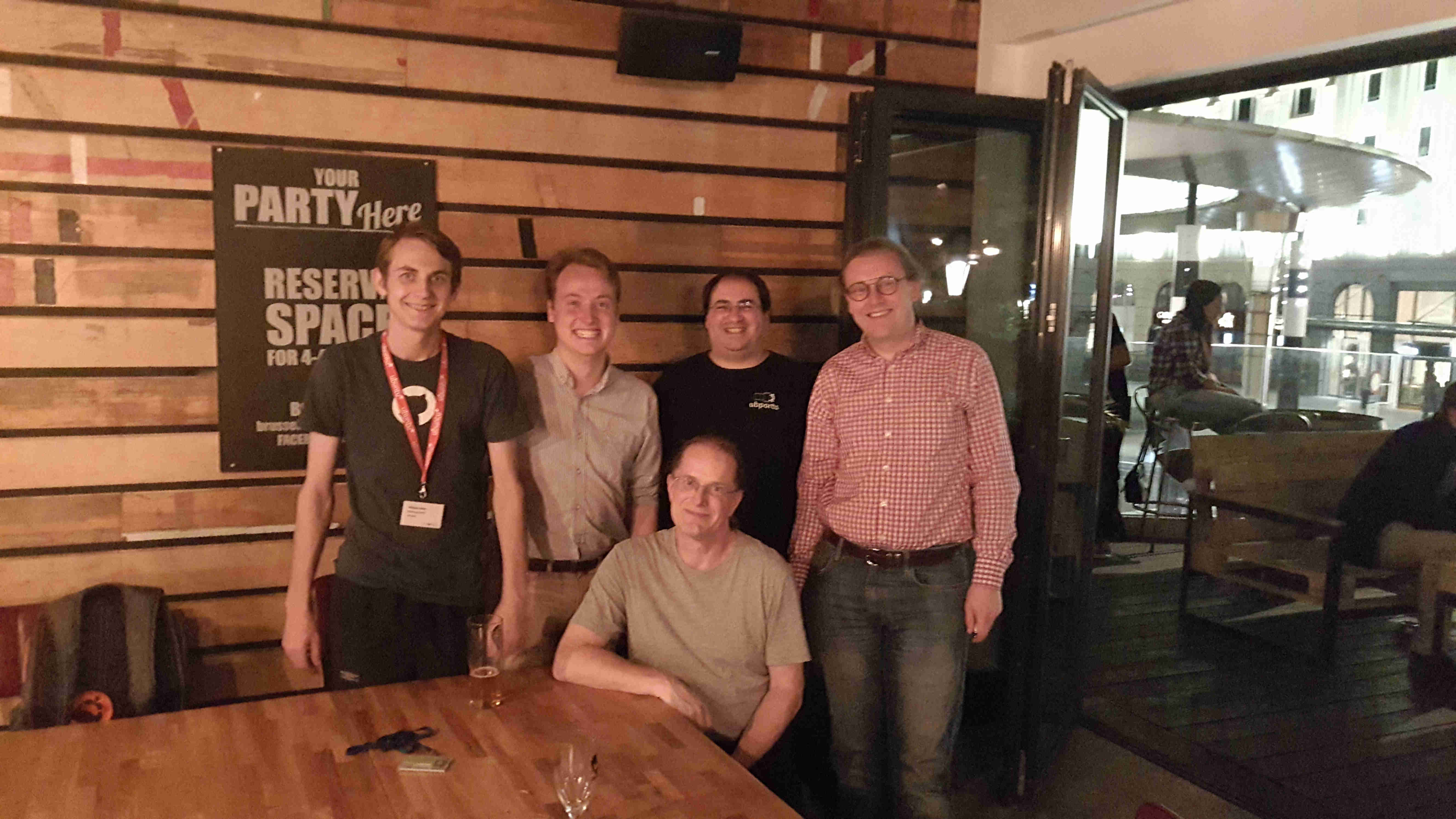 In November, I made presentation about Ubuntu Touch and UBports at the Festa do Software Livre 2018, which was co-organized by Ubuntu-pt, and where I also helped manning the Ubuntu-pt both, and where me and tcarrondo where interviewed by Linuxtechpt Podcast, due to our history of contributions to the Ubuntu-pt Team and Free Software Community.

In April, I was one of the speakers at Ubucon Portugal 2019, with a talk about Ubuntu Touch and the UBports project.

In May, I was in Paris helping manning the UBports Community both at the Ubuntu Party with ~cm-t.

Made a presentation to the Ubuntu-pt Community about UBports and Ubuntu Touch.

I made available my Jitsi server for hosting all the Ubuntu-pt monthly (online) meetups. I presented/co-presented on introduction to the official Ubuntu tools to contribute to Ubuntu (launchpad, Ubuntu SSO, AskUbuntu, Wiki), and processes like out sign the Code of Conduct, etc... We also played SuperTuxKart and celebrated the Groovy Gorila Release.

Contributed with functionality feedback and user testing uNav 3 ahead of the release, the GPS navigation app for Ubuntu Touch.

I was a speaker at the 2020 Official Digital Ocean Hacktoberfest Celebration EMEA, presenting UBports and Ubuntu Touch to developers.

Contributed for the QA the UBports Installer.

I've known Diogo since the early days of the Ubuntu Phone project. He always helps point people in the right direction. Diogo is also always represented at Ubuntu community events such as UbuCon Europe. He even helped organize such an event. I had the pleasure of participating in several podcast episodes on various shows with Diogo where we talked about Ubuntu and the community. I am surprised that he is only now applying for Ubuntu Membership, he has been a valuable member of the Ubuntu community for many years. Make him a member

I only can say one thing: Diogo has to be an Ubuntu member!

I'll not meet a guy with so much passion about Ubuntu and its community as Diogo has. He is always trying to help, he is always involved everywhere. Then, I wouldn't say +1 for his application, I would say +1000! -- costales

In a scale from 1 to 10 Diogo is an 11 on the Ubuntu passion level! He is in constant evangelization of everyone around him, always in the right word/advice. I share with him some projects like the Podcast Ubuntu Portugal, that he challenge me to do with him and until now is being quite a ride... Thanks for everything, bro!-- tcarrondo

Diogo is so passionate for Ubuntu and privacy, that it is not somewhat surprising to know the number of projects he is involved and the amount of things we deals with regularly. Diogo has been a key stone in the Portuguese Loco, helping to spread Ubuntu, despite living abroad. Furthermore, he has played a key role developing Ubuntu Europa, a federation to help organize european LoCos. He connects often with third-party associations to help organize and defend what he thinks are the best interests of all open source communities, Ubuntu included and being a priority that he tries connection too often. For that alone, he is more than deserving of his Ubuntu Membership. It has been a pleasure to coordinate the efforts of the Portuguese LoCo and I know we will be working together on many ends. -- gsilvapt

Diogo not only promotes and understands Ubuntu, but he lives Ubuntu. He is a self-motivated advocate who dedicates his time to improve the whole community. From hosting audiocasts to running meetups, Diogo loves getting together with people and sharing Ubuntu. He has be instrumental in supporting UBports and keeping the Ubuntu Touch project alive. I look forward to working with him more in the community. -- joe

Diogo Constantino must be the most passionate member of the European Ubuntu community I know. His work both for the Ubuntu Europe Federation and the UBports community is amazing and invaluable. Additionally to the unmatched dedication that makes his contribution so valuable, Diogo has an excellent network of contacts in the industry, which helped UBports develop many new relationships. I 100 % support Diogos application (frankly, i am suprised he is not a member already!). -- neothethird

Diogo is one of those rare persons who are just amazing in everything they put their mind to. From his dedicated work with the Portuguese LoCo, to the astonishing number of podcasts and in-person meetups, no one could imagine that he might work harder to advance Ubuntu advocacy. Except that he is such an important part of the Ubuntu Europe Federation and the UBports project, too. With all of that hard work, he is also an incredibly warm, friendly person. There are a lot of people who really embody the spirit of Ubuntu, and as one of them, Diogo is a true inspiration to anyone who hopes to do the same. -- nhaines

I've meet Diogo in different Ubuntu & FLOSS events in Europe and also on many online networks (podcast, chats, etc), and he is always making something about/for Ubuntu and its community. He is a strong and enthusiast advocator of the Ubuntu project & its community in Europe, and having his Ubuntu membership would be simply a normal thing regarding his past, present, and future contributions. Looking forward to share a drink with him at next Ubuntu Party in Paris December 2018 ! -- cm-t

Diogo is a force of nature for the Ubuntu community. I thoroughly enjoy working with him as we create the messaging to keep users informed about Ubuntu Touch. He's always willing to help and doesn't pass up an opportunity to represent Ubuntu at a community event. If he says he's going to do something, it gets done right. -- universalsuperbox 2018-10-15 16:51:06

I have known Diogo since 2008 through Ubuntu-pt meetings in Lisbon and I consider him to be a valuable member to grow the local and European Ubuntu community. He is a great supporter of Free Software and Digital Rights and an active member of the Ubuntu-pt Community Council, always ready to support and develop the Community's initiatives. It has all the merit to be an Ubuntu Member. -- jaimepereira