Feisty Fawn, the name of the latest development branch of Kubuntu, extends the new infrastructure that landed in Edgy Eft and branches out in some exciting new directions. Feature developments in the Feisty Fawn release include improvements to hardware support on laptops, desktops, and high-end servers and aggressive adoption of emerging desktop technologies.

Herd 5 is the fifth in a series of milestone CD images that will be released throughout the Feisty development cycle as images known to be reasonably free of CD-build or installer bugs. These images represent very current snapshots of Feisty. Kubuntu 7.04 Feisty Fawn Herd 5 releases can be downloaded from the following URL:

Screenshots are available at: http://shots.linuxquestions.org/index.php?os=Kubuntu

The Feisty Fawn Herd 5 CD release brings many new and exciting applications. For this latest release of Kubuntu 7.04, usability is the common theme. Additionally, there have been updates to many common applications and changes to the default database application in Kubuntu. With every new pre-release, updates will be documented allowing you to thoroughly test your Kubuntu 7.04 installation. Remember that all of these features are part of a pre-release version of Kubuntu and may still have issues. We ask that for any problems you encounter that you file a bug if one has yet to be filed for your symptoms.
https://launchpad.net/distros/ubuntu/+filebug

The partitioner for Kubuntu installation is currently in the process of getting overhauled. In the past the layout has been noted to be confusing for not only new users but seasoned veterans alike. To use the new partitioner you still need to use the right click menu for the time being as this is still under development. There are going to be more UI controls in the near future. 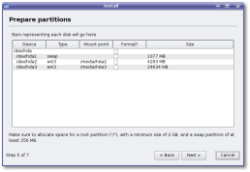 Launching an icon from the desktop now has a new effect. The icon will enlarge as feedback letting the user know that they did in fact click the icon. Note the following image doesn't show the true beauty of this new effect.

INFO: http://www.koffice.org/announcements/announce-1.6.2.php
NOTE: KOffice is not installed by default. Use Adept, Synaptic, or the Command Line to install it.

INFO: http://basket.kde.org/
NOTE: Basket is not installed by default. Use Adept, Synaptic, or the Command Line to install it.


Basket 1.0, KDE's multi-purpose note-taking application has released their latest version. With this release there are the typical bug fixes, additional features, and improved integration. To read the full list of changes please review http://basket.kde.org/changes-1.0.php.

Many of you that have been using Konqueror for a while know that Google.com, Gmail, and the Google Calendar have issues. These issues were layout issues that crippled the calendar and even made it impossible to log in to Gmail. Not any more, Konqueror will automatically use the Firefox user-agent for Google.com, Gmail, and the Google Calendar now by default. Before users had to set this up manually, but this isn't the case anymore.

Ever since day one almost there has been a font issue plaguing many Kubuntu Herd desktops. This has been fixed with the Herd 5 release. Also fixed are the translation issues with KDesktop.

We want to hear what you think about the release of Kubuntu 7.04 Feisty Fawn Herd 5. Tell us if it Rocks, if it is just OK, or if it is flat out wrong. No matter the feedback, as long as it is in line with the Ubuntu Code of Conduct, we would like to hear it.