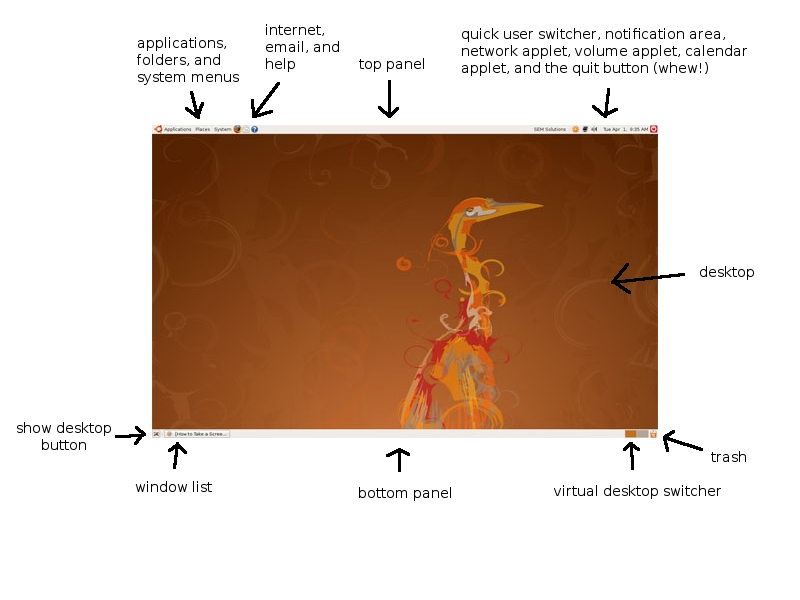 The Ubuntu desktop comes with the GNOME desktop environment and it consists of everything you see on your screen. The desktop comes clean, free of icons on the desktop, but they can be manually added. The panels include all the links to get around your computer and run applications. The interface is rather simple, quick, and intuitive. You will get used to it quickly, with just a little looking around. This quick guide will help you to get started with the most important aspects.

Let's start with the menus. Applications will get you to all your applications. A drop down list is displayed with applications grouped in categories (e.g. Accessories, Graphics, Internet, etc.). At the base of the menu is the "Add/Remove" item, which you use to add and remove applications on Ubuntu quickly and easily, accessing the thousands of free applications provided in the Ubuntu repositories.

The next menu, Places, is where you can access all the folders on your system. Your own personal folder, known as the "Home" folder, is where all of your personal files are held. Sub-folders, like your documents, pictures, and video folders are also listed, with additional links to the base of your file system, CD creator, and your network.

Now that you know how to get around to your applications, folders, and where to configure your computer, let's move on!

Some of these applications may not sound familiar, but you may recognize Mozilla Firefox, and even possibly OpenOffice.org.

For working with documents, OpenOffice.org has compatibility with Microsoft Office 2003, and in future versions will even have support for Office 2007. The default file format is .ODF, which is an open file format, which means you will be able to open the same documents you write today 15 years from now.

For pictures, you can use F-Spot, which is a very good picture manager. The GIMP is a free image manipulation program, and is very powerful, and includes many features similar to those in Adobe Photoshop. You can import pictures from your digital camera as soon as you plug it into Ubuntu.