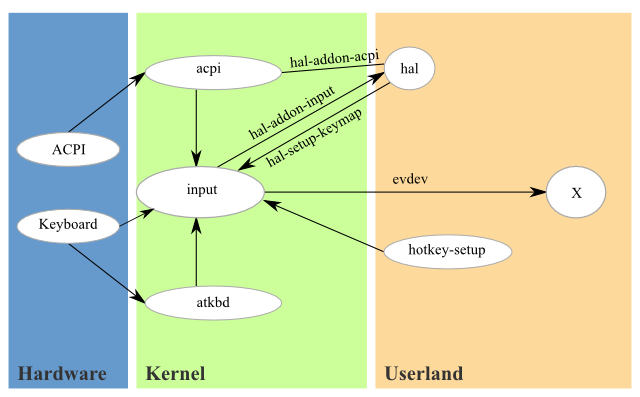 The Ubuntu 8.10 process highlighted the fact that we do not have a consistent architecture for how hotkeys work across different hardware in Ubuntu, and many of the developers do not have a clear understanding - or may have different understandings - of how the system is intended to work. This is intended to be the authoritative architecture description that developers can refer to when interacting with Ubuntu packages, to identify whether a given component is operating as intended.

This spec also identifies certain work that should be completed as part of the Ubuntu 9.04 process to eliminate certain extraneous components that unduly complicate the architecture, and to ease the process of debugging hotkey problems that do arise.

Hotkey handling in Ubuntu has been consolidated in the latest release, leading to moving most functionality out of the hotkey-setup and acpi-support packages to the hal-info package.

This spec documents the cross-platform architecture that hotkey handling is intended to use in Ubuntu, serving as a guide for debugging hotkey problems. It should be kept up-to-date if this architecture changes.