Canonical announced that a boot in 10 seconds is the goal for the next Ubuntu release 10.04 "Lucid Lynx". While the current release takes longer than 10 seconds different changes have been made to the boot procedure already reducing boot time and preparing the 10 seconds goal:

The "Grub Legacy" boot loader has been replaced by "Grub 2" by default. "Grub 2" is a complete rewrite of Grub and focusses on modularity and portability. Besides a claim for more robustness it features

Please note: If you are upgrading from an earlier Ubuntu version, your "Grub Legacy" won't be upgraded to "Grub 2" by default. There is a short tutorial explaining a manual upgrade: http://www.ubuntu-inside.me/2009/06/howto-upgrade-to-grub2-on-ubuntu-jaunty.html

More information about "Grub 2" on http://www.gnu.org/software/grub/grub-2.en.html

More daemons like the gdm Gnome Display Manager have been switched from classic init scripts to upstart shortening their run time due to parallel runs. 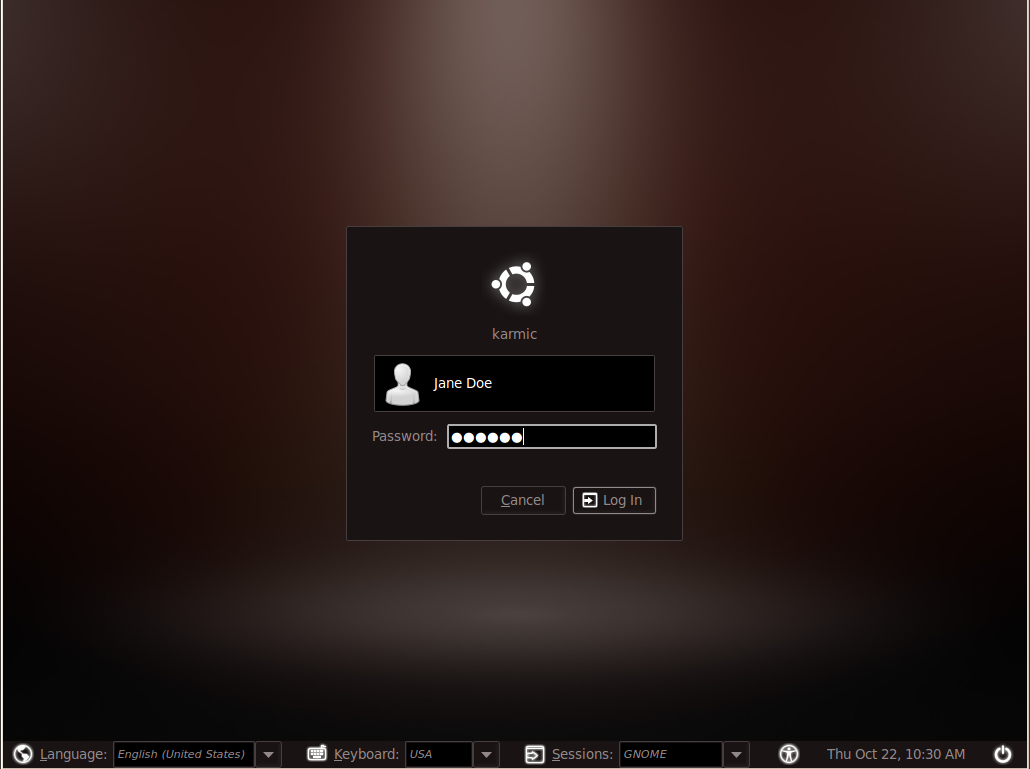 Empathy replaced Pidgin as the default chat client in Ubuntu Desktop. While still being able to install Pidgin, you are encouraged to try the slim and clean Empathy messaging client, that integrates well into the Ubuntu Desktop by using the Telepathy framework. Empathy supports all widely used messaging protocols.

Empathy offers you video and audio chat. The current version comes with the ability to zoom video chats into full screen mode and a redial feature, making it easier to reconnect.

Pidgin has been replaced as default messaging application by Empathy but can easily be installed via the Ubuntu Software Center.

Pidgin now offers video and audio chat over XMPP/Jabber like Empathy does. As it uses the same protocol, you should be able conferencing with Empathy and Google Talk users.

Evolution, which is part of Gnome, ships in version 2.28. Besides a bunch of bug fixes the following new features and enhancements are ...

Thunderbird ships as version 2.0.0.23 which is the same version running on an up to date Ubuntu Jaunty 9.04.

Ubuntu 9.10 Karmic Koala's unofficial slogan is "social from the start" as stated on https://wiki.ubuntu.com/DesktopTeam/Specs/Karmic/SocialFromTheStart. The Gwibber client takes the center of this effort:

Gwibber was first introduced to Ubuntu 9.04 Jaunty in version 0.8. The new version 2.0 comes with a broad set of new features and changes.

The user interface has been restructured. You can choose between the old single column view and a configurable two column view. The two column view provides a folder like view for accounts including handy "virtual folders" for replies/retweets and private messages. A handy search bar enables you to find posts quite fast. The new Tomboy interfaces enables you to save messages directly to the Tomboy notes applet.

The Network Manager has been cleaned up. It now focusses on the most important settings while hiding seldomly used settings. This should help beginners and average users to use the Network Manager more efficiently as you need to make less decisions e.g. when joining a wifi network. 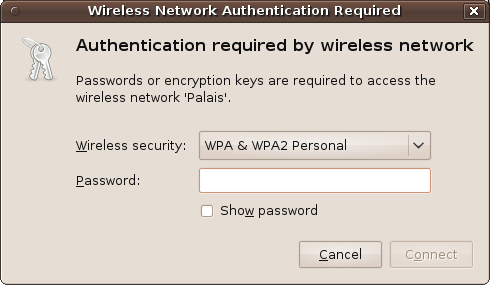 OpenOffice.org 3.0 (shipped with Ubuntu 9.04) introduced notes in documents as a starting point for collaboration. The current version extends these by enabling users to reply to notes.

The grammar checking system has been improved.

Firefox 3.5 focusses on privacy features. It ships a "privacy mode" that can be (de-)activated by the shortcut CTRL-SHIFT-P. During a privacy mode session no modifications are permanently written to the Firefox history/cookie store. All settings during a privacy session are temporary and removed when leaving the privacy mode.

Besides there is also the possibility of removing a time based range of your browser history from the cache and url history, e.g. the last hour, four hours or a whole day.

Firefox 3.5's rendering engine has been improved so it can display pages remarkable faster than in Firefox 3.

The standard browser of Gnome is "Epiphany". With Gnome 2.28 Epiphany uses the WebKit engine that is widely known from the Safari and Konqueror browser. While Epiphany is kept much simpler than the widely used Firefox, it's usage of WebKit provides a remarkable faster and reliable engine for displaying web pages. You can compare Firefox and Epiphany Webkit by using the "Acid3" test, where Firefox reaches 93 points while Epiphany gets all 100 points: http://acid3.acidtests.org/ 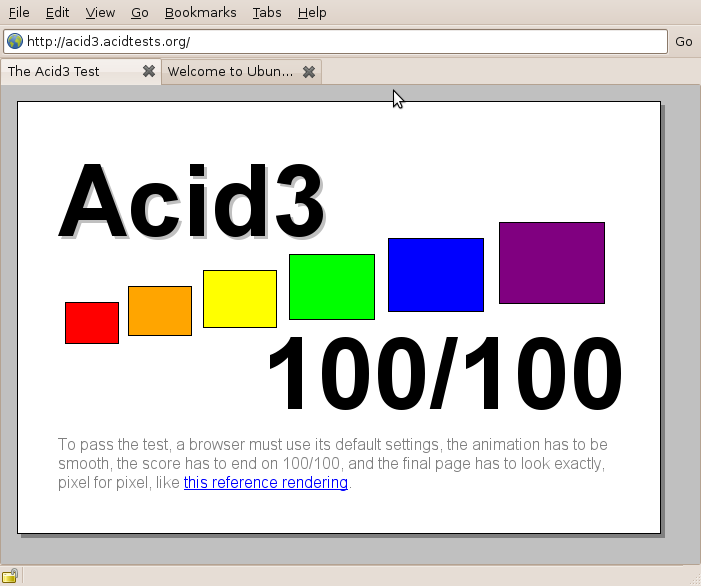 Ubuntu 9.10 ships with the latest release of the Gnome Desktop (version 2.28).

Ext4 is the new default file system with enhancements for server and desktop usage:

A new performance benchmark interface and a benchmarking tool called "perf" have been integrated into the kernel. "perf" delivers much more detailed information that top and similar applications do so far. If you want to try it, install the kernel sources and compile it in "tools/perf". 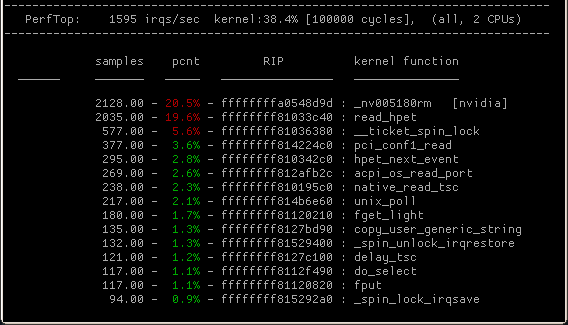 The notify on change framework has been reviewed and different approaches have been merged.

The kernel is now able to keep the system more responsive under memory pressure on desktop systems.

Canonical launched a personal cloud storage service called "Ubuntu One". It provides you with 2Gb online space for free or a 50Gb plan for 10 USD per month.

Ubuntu One automatically syncs all files stored in the folder "~/UbuntuOne" to and from the cloud and allows to keep multiple machines in sync.

A pre release could already be used in Ubuntu Jaunty. The new version for Karmic Koala 9.10 adds the following features: 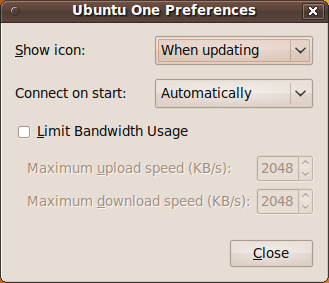 More information about Ubuntu One on https://one.ubuntu.com/

The upcoming Gnome 3 that is to be released early 2010, will provide fundamental changes to the user interface. "Gnome Shell" is one of the promising projects that can already be tested in an early stage in Ubuntu 9.10 "Karmic Koala". It shows a new paradigm of desktop work.

If you want to test "Gnome Shell", install the package "gnome-shell", open a terminal and enter the command "gnome-shell --replace&".

Please note: "Gnome Shell" is in spite of it's name not a shell application but rather the opposite. 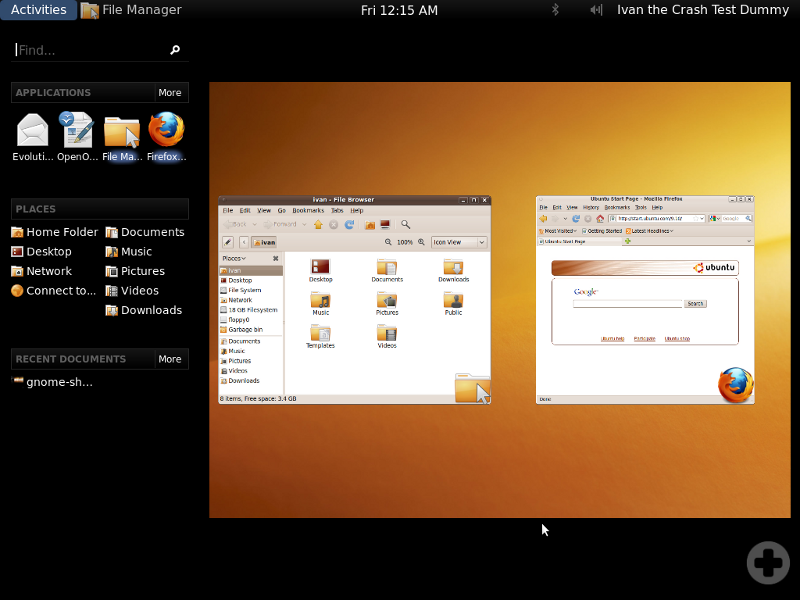 More information on "Gnome Shell" can be found on http://live.gnome.org/GnomeShell

The "Computer Janitor", an application for cleaning up outdated packages, has been improved by showing more detailed information about packages to be removed and should therefore be more safe to use than earlier. 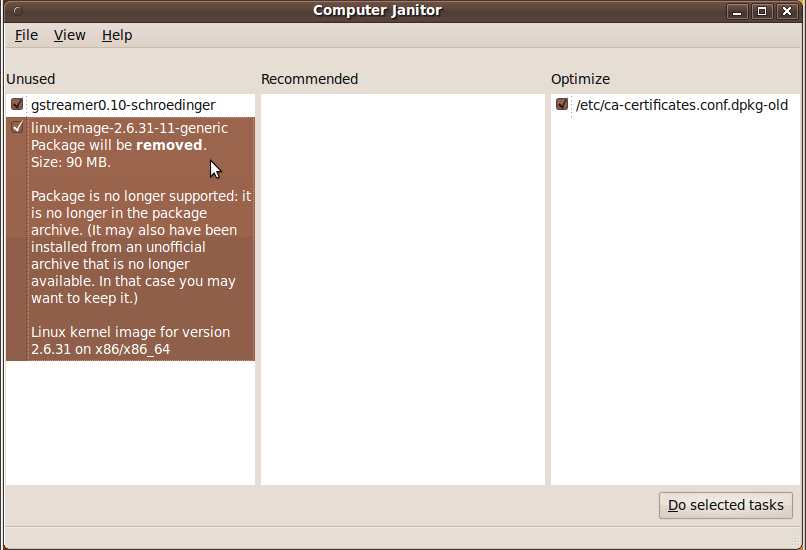 The Migration Assistant is now able to migrate data from OS X and Windows 7.

Wubi, the installer for Ubuntu within an existing Windows, is now able to move a Wubi Ubuntu installation to it's own partition and changing it to a normal setup.

Ekiga, the sip voice over ip application has been removed from the default applications as the place on the install disc needed to be reconsidered and Ekiga was used rarely. It remains as a normal package that can be installed at any time.

More application profiles are delivered, e.g. for NTPD, the Gnome Document Viewer and libvirt, making it possible to put KVM and Qemu virtualization into a sandbox.

iScsi support has been improved so the root file system can now be placed on an iScsi target device. 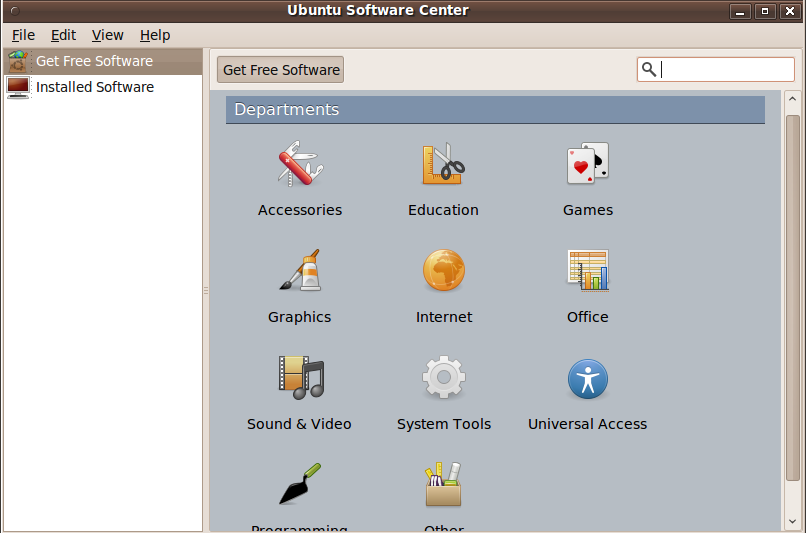 To simplify the interface, in a new Ubuntu installation or user account, most menu items and text buttons no longer include icons by default. Menu items representing objects such as applications, files, bookmarks, or disks still use icons. (OpenOffice.org has not yet been updated to reflect this change.)

These sources have been used while writing this release note wrap up. Please note: These sources are not official Ubuntu ressources. Some of already them featured upcoming changes in Karmic a while ago and might therefore not be up to date. Nonetheless they have been a great support.