Behind Ubuntu interviews Jani Monoses, the founder of Xubuntu.

The Fridge, plugged in again and humming along

Readers of Ubuntu's premier community-based news may have felt like The Fridge had been put into deep freeze because of people's commitments being overextended.

Therefore it will be uproariously pleasing that the job of editing The Fridge was [http://lists.ubuntu.com/archives/ubuntu-marketing/2006-July/000727.html officially handed over] to Jorge and the Ubuntu-Marketing team, who responded with vigor and soon set up the #ubuntu-fridge channel on Freenode (after a short debate about whether #fridge or #ubuntu-fridge was easier to type)!

With a wiki-based submission method, the news started flowing in, and its effectiveness was soon demonstrated: Within 48 hours of the announcement, there were enough submissions to fill the entire front page!

Among the first stories to be posted was, of course, one announcing Issue #7 of the Ubuntu Weekly Newsletter. We hope to see future issues going up quickly as well!

You can submit your own articles simply by tagging them with [FridgeContent]. They'll be automatically linked to an index of ready material.

Did that say Ubuntu? California sees an Ubuntu billboard

Ubuntu isn’t just a great way to get more from your computer. Now it’s roadside art!

Eagle-eyed readers may have spotted blog posts with photos of an exceptionally good-looking billboard in the USA. The beige and red, friendly typeface looks incredibly familiar!

Find out more on The Fridge - http://fridge.ubuntu.com/node/480

Ubuntu was the featured article on Wikipedia, appearing on their front page.

The last few weeks have seen a resurgence in education on various parts of Ubuntu -- not education as a target market but education of the many users and developers of Ubuntu. Both the Ubuntu Classroom, aimed at users, and the MOTU School, aimed at package uploaders, held classes this week.

The New User Network offered its first class on Saturday, August 5, 2006, at 18:00 UTC. The first course helped users with Internet Relay Chat (IRC). The text-based irssi and graphical Konversation IRC clients were covered in this course, and a follow-up course will be offered on Sunday, August 6, 2006, time TBD. https://wiki.ubuntu.com/Classroom

The 'Masters Of The Universe' have been busy offering some amazing classes. Martin Pitt recently presented an IRC seminar about "How to patch source packages." More information concerning this class as well as the other ones they have done so far can be viewed at the following URLs: https://wiki.ubuntu.com/MOTU/School https://wiki.ubuntu.com/PatchingSources http://netz.smurf.noris.de/logs/freenode/2006/07/25/%23ubuntu-motu-school.log

Two of the Ubuntu Summer of Code (SoC) projects reached major milestones this week with their source packages being uploaded to the Edgy repositories.

Willow-ng - Travis Watkins's Bayesian content filter (package name willow-ng). You can track its progress at Travis's Blog, and code can be found in the willow-ng bzr repository

Migration Assistant - Evan Dandrea's (package name migration-assistant) - You can track its progress at Evan's blog, and code can be found here

The latest and greatest in Edgy (and a bit for 6.06 LTS "Dapper Drake")

Daniel Holbach (dholbach), one half of the crazy GNOME uploading team, has been hard at work getting Galago and Telepathy into Edgy. What are these marvelous things, you ask?

Galago is a "presence framework" designed to allow easy data access about people and their availablity to applications. This includes such concepts as when writing an email, you can see if that person is online or not, much like GMail does. You can find out more about Galago at its website: http://www.galago-project.org/about.php

Telepathy is a "unified framework for real-time communication". It is designed to make writing IRC and IM apps easy by abstracting the actual protocol used, be it Jabber, AIM, Yahoo, IRC, etc. You can find out more about Telepathy at its website: http://telepathy.freedesktop.org/wiki/

Not to be outdone, the always-busy and sadly-not-working-for-Canonical-anymore Jeff Waugh has uploaded Robert Love's latest gift to the world, beaglefs 1.0.3 . This allows you to take a beagle query and make it into a filesystem, to be mounted just like a CD or a hard drive partition. More information and shiny screenshots can be seen at Robert's blog, http://rlove.org/log/20060721

Jonathan Riddell has also updated Edgy to have KDE 3.5.4, the latest stable point release. Further information can be found at http://kubuntu.org/announcements/kde-354.php and http://dot.kde.org/1154521282/

There is an upcoming Development Team Meeting at 15:00 UTC on Thursday, August 10, 2006 in #ubuntu-meeting on Freenode.

There is a scheduled meeting for the Kubuntu development team. This meeting will be on Thursday, August 10, 2006 at 2100 UTC in #ubuntu-meeting on Freenode.

Kubuntu was on the KDE stand at Lugradio Live 2006, and Jonathan Riddell gave a talk about Kubuntu Dapper and KDE 4.

VNU have published an instant expert guide to Linux. This special edition magazine is dedicated to helping the first time Linux user install and learn about Kubuntu. It comes complete with a full version of Kubuntu 6.06 LTS and includes a guide to Konqueror and all the best applications for your KDE desktop. Available on UK newstands as Computer Active and elsewhere in Europe under other VNU publication names.

Canonical has a new "Education Programme Manager." His name is Richard Weideman, and he goes by RichEd on Freenode. Richard is the first line contact on behalf of Canonical for all Education issues.

Canonical has also employed Rodrigo Novo, aka rodarvus, as the new X maintainer and Technical Lead for Edubuntu.

Also, community member AliasVegas has been appointed the new Artist-In-Chief for Edubuntu.

Everyone please extend a warm welcome to these fine additions to the community. Welcome aboard, and we all look forward to working with you. Congratulations!

There is an upcoming Edubuntu meeting at 12:00 UTC on Wednesday, August 9, 2006 in #ubuntu-meeting on Freenode.

The Xubuntu team has been hard at work with new art designs and proposals. It is looking great so far, but don't take our word for it, take a look yourself at https://wiki.ubuntu.com/Xubuntu/Artwork/Edgy/IncomingProposals

There has been more work on integrating Xfce 4.4 beta 2 into Edgy. They have also added a new svn snapshop of Thunar, Xfce's new file manager, sporting Trash support.

Every Wednesday is a Hug Day. See #ubuntu-bugs on Freenode for more information!

Ubuntu 6.06 LTS "Recommended by IT Reviews"

IT Reviews has given Ubuntu 6.06 LTS their "Recommended" award. From the review:

Feature Of The Week - KDict

KDict is a graphical client for the DICT™ protocol. It enables you to search dictionary databases for a word or phrase and displays matching definitions. KDict tries to ease basic as well as advanced queries. A separate list offers a convenient way to deal with the enormous number of matching words that an advanced query may return. KDict is located in the Universe repositories, and can be installed by apt/synaptic/adept and others. Command line is quick and easy just by typing, 'sudo apt-get install kdict'. 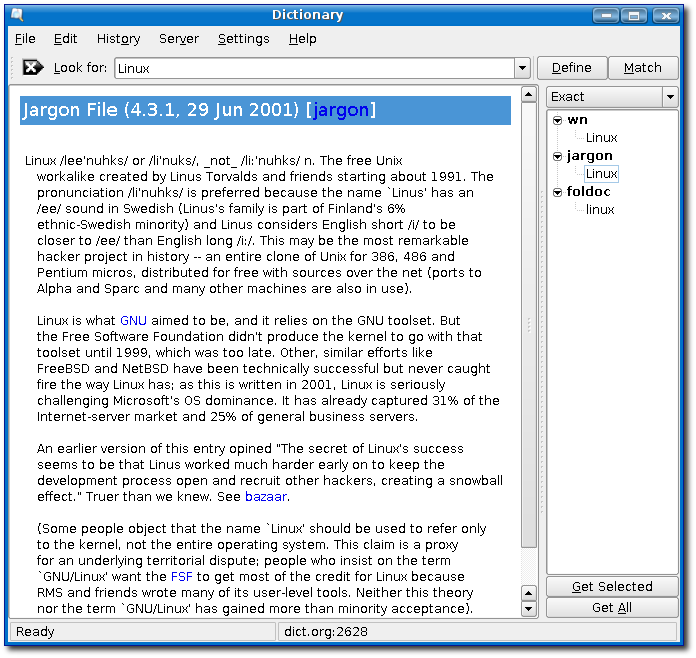